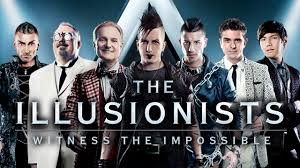 On the heels of a highly successful multi-city tour and run on Broadway, the world’s best-selling touring magic show, The Illusionists – Live from Broadway™ will play the Dr. Phillips Center for the Performing Arts in the Walt Disney Theater from October 4 – 9, 2016 as part of its current North American tour to more than 50 cities. Tickets are on sale to the general public tomorrow, Friday, July 229 2016. Tickets start at $30.75 and may be purchased online at drphillipscenter.org, by calling 844.513.2014 or by visiting the Dr. Phillips Center Box Office at 445 S. Magnolia Avenue, Orlando, FL 32801 between 10 a.m. and 4 p.m. Monday through Friday, or 12 p.m. and 4 p.m.Saturday. Online and phone ticket purchases include handling fees.

Full of hilarious magic tricks, death-defying stunts and acts of breathtaking wonder, The Illusionists has shattered box office records worldwide and thrilled audiences of all ages with a mind-blowing spectacular, showcasing the jaw-dropping talents of seven of the most incredible illusionists on earth.

Creative Producer Simon Painter said, “We can’t wait to bring this electrifying show to Orlando for a truly entertaining experience for the whole family. The Illusionists is the most non-stop and powerful mix of outrageous and astonishing acts ever to be seen on the live stage.”

The seven stars, each a master in their own field, are:

Simon Painter is a visionary creative theatrical producer who hails from London. Simon started his career on stage as a classical violinist and performed the lead role for Spirit of the Dance in Las Vegas. The first show he produced, Le Grand Cirque, smashed box office records at the Sydney Opera House, selling over 40,000 tickets in 10 days. His two subsequent productions, Aerial Dreams and Adrenaline also broke records in Sydney and across the world and achieved critical acclaim. In 2010, Simon had five versions of Le Grand Cirque playing concurrently. In late 2010, Simon joined forces with Australian producer and close friend, Tim Lawson, and began assembling the greatest magical minds from a wide spectrum of disciplines. His production of The Illusionists has already performed to record-breaking crowds in theatres and arenas across the globe including Australia, Mexico, Latin America, South America, Europe, Asia and the Middle East. In addition to The Illusionists – Live from Broadway, Simon’s current projects include Le Noir (The Dark Side of Cirque) and Illusionists 2.0, both of which are currently playing extensive international tours.

MagicSpace Entertainment is headed by Lee D. Marshall, Joe Marsh, John Ballard, Steve Boulay and Bruce Granath and has been producing and presenting national tours, Broadway shows, concerts and museum exhibits worldwide for over 35 years. Consistently one of the top promoters in the world, MagicSpace Entertainment typically produces and presents more than 350 events worldwide per year. Recent Broadway credits include The Illusionists – Witness the Impossible (Broadway & West End), Donny & Marie – A Broadway Christmas,American Idiot and RAIN – A Tribute to the Beatles On Broadway.  National tour credits include The Illusionists – Live From Broadway, Lord of the Dance created by Michael Flatley, Jamie Hyneman and Adam Savage starring in Mythbusters – Unleashed, Alton Brown Live, Mannheim Steamroller Christmas by Chip Davis, Donny & Marie Christmas, RAIN – A Tribute to the Beatles, The Magic of David Copperfield, Circus 1903 – The Golden Age of Circus, Jesus Christ Superstar, A Chorus Line and national concert tours by Janet Jackson, Cher and Fleetwood Mac to name just a few.  Touring museum exhibitions produced include Jurassic World:  The Exhibition, Tutankhamun and the Golden Age of the Pharaohs exhibition, Titanic: The Exhibition and Diana – A Celebration, St Peter and the Vatican: The Legacy of the Popes exhibition. MagicSpace Entertainment has offices in Park City and Salt Lake City, UT.  www.magicspace.net

The Dr. Phillips Center for the Performing Arts is a nonprofit 501(c)3 organization operating the

state-of-the-art performing arts center in downtown Orlando, Florida. With its opening in November 2014, the performing arts center launched its vision of Arts for Every Life by being a gathering place for creativity and discovery; a vibrant urban destination where artists, audiences and students come to experience, explore and learn.  The two-block community destination features the 2,700-seat Walt Disney Theater, 300-seat Alexis & Jim Pugh Theater, Seneff Arts Plaza, Dr. Phillips Center Florida Hospital School of the Arts, the DeVos Family Room, and other event rental spaces.  Future expansion includes Steinmetz Hall, a 1,700-seat acoustical theater, along with rehearsal, classroom, office space and commercial development spaces.  The Dr. Phillips Center is a public-private collaboration with the City of Orlando, Orange County, the State of Florida and generous donors. For more information please visit drphillipscenter.org.