REVIEWED BY: MATTHEW PERTA
PHOTOS BY: MICHAEL BROSILOW
HIGHLY RECOMMENDED
It was a night when expectations were running high, and by evening’s end, those expectations were met in a spectacular way.  That’s the best way I can begin to relate my impressions upon entering the $ 1.75 million newly renovated Stackner Cabaret located inside the fabulous Milwaukee Center. Something else that I discovered to be quite fabulous – the American premiere of Songs for Nobodies.

As I entered under the new Stackner Cabaret lighted marquee and the dozens of lights suspended from the ceiling in the lobby area, I could feel the excitement generated inside by a jammed-pack house of patrons, all taking in the new digs and waiting for The Rep’s 65th Anniversary season to start.  When did it did begin, spectacular moments were made. Thanks to the extraordinary talents of Bethany Thomas, Songs for Nobodies leaves its audience spellbound.

Joanna Murray-Smith’s Songs for Nobodies, having enjoyed sold-out tours in Australia and the United Kingdom, is about stories – we all have them, right? – and a favorite song – which we all have, too, right?  Bethany Thomas plays a total of 10 characters in this one-woman tour-de-force, five are so-called “nobodies” who interact with or are mesmerized by five legendary divas: Judy Garland, Patsy Cline, Edith Piaf, Billie Holiday and Maria Callas.
Songs for Nobodies required Thomas to master five vastly different accents and personalities – Garland’s later-in-life throaty voice, Cline’s rich vocal chords and charming Southern twang; Piaf’s animated performing style, Holiday’s sassy, soul-searching blues and Callas’ amazing operatic voice.  Thomas rises to the occasion magnificently, etching portraits on stage that are both remarkable and touching.
The stories tug at the heart.  A woman named Bea Appleton from Minnesota meets Garland in a ladies’ room, and offers to fix her hem.  Then there’s Pearl Avalon, a theater usher who gets to make a dream come true when Patsy Cline brings her onstage to sing. A woman recalls her French father, who was miraculously rescued during World War II by Piaf, called “The Little Sparrow”.  A New York Times fashion reporter in 1947, who craves to be the “Rita Hayworth of Print” gets a chance to interview the at-first unresponsive Holiday.  Finally a young woman takes on the job of nanny aboard the cruise ship Christina, inhabited by Callas and Aristotle Onassis, who asks the nanny who she might be if she were somebody.
The stories contain valuable life lessons that are interspersed with a rich musical score that includes, Come Rain or Come Shine (Garland), Crazy (Cline), Lady Sings the Blues (Holiday); Non, Je ne Regrette Rien (Piaf) and Viss D’Arte from Tosca (Callas). Thomas’ stirring rendition of Come Rain or Come Shine earned her thunderous applause; she deservedly received even more as the evening progressed, culminating in a standing ovation after singing the last note of Viss D’ Arte. 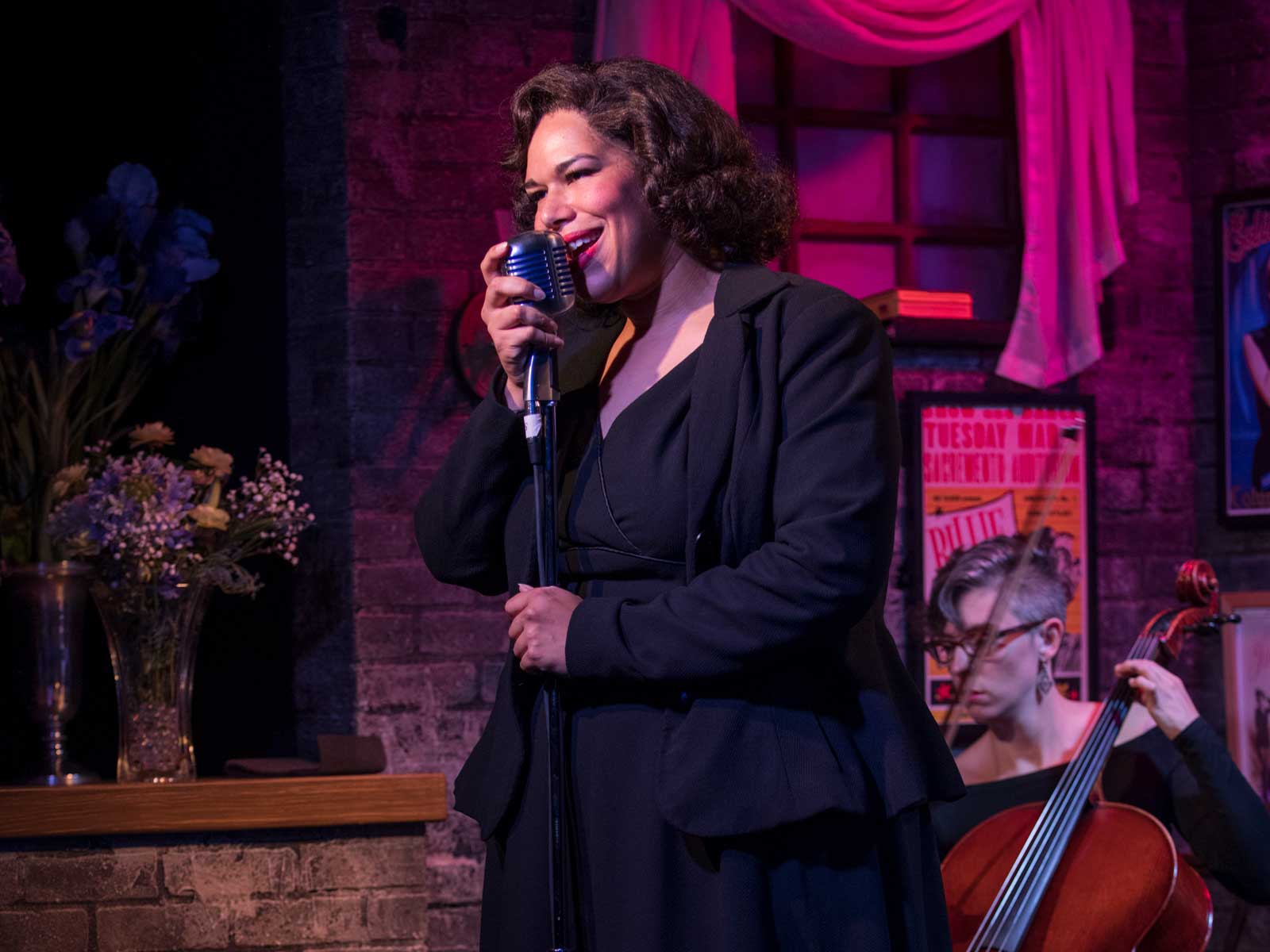 Thomas is a noted singer/songwriter whose theatrical credits in Chicago include Porgy and Bess at Court Theatre and The Tempest at Chicago Shakespeare.
The $1.75 million newly-renovated Stackner Cabaret boasts an increased seating capacity, a state-of-the-art production upgrade, comfortable new seats and spacious tables, more ladies’ restrooms, a new kitchen and bar and an expanded outdoor patio.
Songs for Nobodies runs through Nov. 4 in the Milwaukee Rep’s Stackner Cabaret,
108 E. Wells in Downtown Milwaukee.
For tickets visit www.MilwaukeeRep.com or call (414) 224-9490.