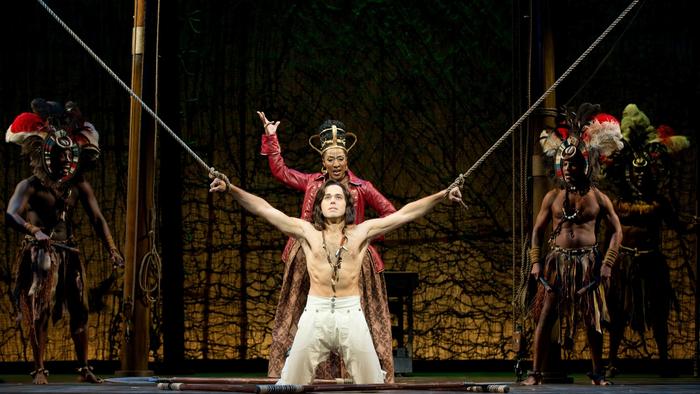 In Chicago is thrilled that the Pre-Broadway World Premiere engagement of AMAZING GRACE, the new musical with music and lyrics by Christopher Smith and a book by Christopher Smith and Arthur Giron, directed by Gabriel Barre(Andrew Lippas’ The Wild Party) and choreographed by Tony Award® winner Christopher Gattelli (Newsies), has captivated audiences and critics alike. AMAZING GRACE will play Chicago through Sunday, November 2.

Audiences are swept away and the critics agree:

“A stirring musical. An epic romance. Artfully produced on the lavish scale of Les Mis.”

“Hearing ‘Amazing Grace’ sung by this cast makes for an undeniably stirring theatrical moment ; it brought tears to my eyes.”

“From the stellar performances to the flawless costumes, ‘Amazing Grace’ is nothing short of amazing!”

“This emotional and gripping story ensures you will never hear the beautiful hymn ‘Amazing Grace’ the same way again.”

“A musical of raw power with superb, intense performances.”

“Young and Mackey are fiercely charismatic leads with strong chemistry”

Produced by Carolyn Rossi Copeland and presented by Broadway In Chicago, AMAZING GRACE is a world premiere musical based on the awe-inspiring true story behind the world’s most beloved song. A captivating tale of romance, rebellion and redemption, this radiant production follows one man whose incredible journey ignited a historic wave of change.

John Newton (Josh Young), a willful and musically talented young Englishman, faces a future as uncertain as the turning tide. Coming of age as Britain sits atop an international empire of slavery, he finds himself torn between following in the footsteps of his father – a slave trader – and embracing the more compassionate views of his childhood sweetheart (Erin Mackey). An unforgettable musical saga, AMAZING GRACE captures the spirit of history’s sweetest and most powerful sound: freedom.