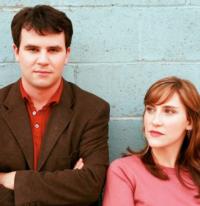 A mix of Broadway stars and indie pop artists can be heard on Kerrigan & Lowdermilk’s sophomore album Kerrigan-Lowdermilk Live, due to release on May 21, 2013.

The 18-track album is produced by Michael Croiter and Brian Lowdermilk on Yellow Sound Label and will only be released digitally. It includes Kerrigan-Lowdermilk’s never-before-recorded favorites like “My Party Dress,” “Avalanche” and “Holding On.” It is the result of a promise made to the loyal fans who helped the duo raise a record $35,000 in their kickstarter campaign for their first album, Our First Mistake, overfunding the campaign by $25,000. The team promised to do a concert tour and make a live album with the extra funds. In fact, all of the album’s tracks come from Kerrigan-Lowdermilk’s seven-concert tour entitled “You Made This Tour”, which took place at venues across New York and Philadelphia over the course of five months in 2011.

One of the most celebrated writing teams of their generation, Kait Kerrigan and Brian Lowdermilk blur the line between musical theater and pop music. Their songs, including hits “Run Away with Me” and “My Party Dress,”  have found international recognition, gathering millions of views on YouTube and earning them a legion of young fans.  Their critically-acclaimed debut album Our First Mistake reached #1 on the iTunes Singer-Songwriter chart, and their musicals have been developed and produced at theaters across the country.  www.kerrigan-lowdermilk.com