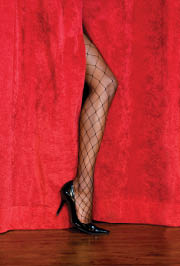 How many times can a girl make the same mistakes? Charity Valentine’s problems aren’t unique—a dead end job, a string of dates with identically flawed men and a knack for making the wrong choices. Of course, in her case the job is as a dance hall “hostess” and her dates all seem to end with her being pushed into the lake— but that won’t shake her belief that great things lie just ahead. And perhaps they do…

Tickets, subscriptions and memberships are available at the Box Office, 376 Park Avenue, Glencoe, 847-242-6000 and writerstheatre.org.

Title: Sweet Charity
Book by: Neil Simon
Music by: Cy Coleman
Lyrics by: Dorothy Fields
Based on the Film by: Frederico Fellini, Tullio Pinelli and Ennio Flaiano
Produced for the
Broadway Stage by: Fryer, Carr and Harris
Conceived, Staged
and Coreographed by: Bob Fosse