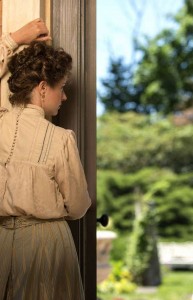 Fresh on the heels of last season’s critically acclaimed production of Hamlet—one of the most nuanced men in dramatic literature—comes one of the most complex and fascinating female characters: Hedda Gabler.

Equal parts idealistic heroine and callous antagonist; victim of circumstance and master manipulator, Hedda finds herself trapped by society in a world that does not fit her.  To survive, she sets in motion an array of schemes, sowing seeds of calculated destruction in an attempt to make an impact on her husband, friends and lovers.  The result is a journey of impulse and emotion that is both achingly desperate and wildly passionate.

Actor Kate Fry and Director Kimberly Senior, collaborators on last season’s hit drama, The Letters, bring their shared passion to this master work, offering audiences the unique opportunity to get up close and personal with one of the most extraordinary and seductive characters in the dramatic canon.

Sean Fortunato (Jorgen Tesman) returns to Writers Theatre after appearing in The Real Thing, Travels with My Aunt, Rosencrantz and Guildenstern Are Dead, The Chosen and Rough Crossing among others. Additional credits include Cyrano De Bergerac, School For Lies, Sunday in the Park with George, Timon of Athens (Chicago Shakespeare Theater), Measure for Measure (Goodman Theatre), Enron (TimeLine Theatre Company), Detective Cioffi in Curtains (Drury Lane Theatre), Rose Rage (The Duke on 42nd, NY), and work at Marriott Theatre in Lincolnshire,Northlight Theatre, Court Theatre, Remy Bumppo Theatre Company, Theatre at the Center, About Face Theatre, Intiman Theatre, Old Globe Theatre and ten seasons with Peninsula Players Theatre where he recently played George in Sunday in the Park with George. Fortunato appeared as Ted in the film The Merry Gentleman directed by Michael Keaton. He has received four Joseph Jefferson nominations and an After Dark Award. Fortunato will be seen next as Rene Gallimard in M. Butterfly at Court Theatre.

Kate Fry (Hedda Gabler) returns to Writers Theatre where she previously appeared in A Minister’s Wife, Oh, Coward! and The Letters. Other Chicago credits include: several productions with Chicago Shakespeare Theater (including As You Like It, Henry IV parts 1 and 2, The Merchant of Venice and The Moliere Comedies), over a dozen productions at Court Theatre (including Caroline or Change, Arcadia, The Romance Cycle, My Fair Lady), Victory Gardens Theater (In the Next Room, or the Vibrator Play), as well as work with Marriott Theatre in Lincolnshire, Apple Tree Theatre and Theater at the Center. Regionally, she has worked with Center Theatre Group in LA, McCarter Theatre in Princeton and Repertory Theatre of St. Louis. Off-Broadway: Candida in A Minister’s Wife at Lincoln Center Theater. She is the recipient of 4 Joseph Jefferson nominations, two Joseph Jefferson awards, the After Dark Award, Chicago Magazine’s actress of the year, and the Sarah Siddons award. Kate is married to actor/teacher Timothy Edward Kane; they have two sons.

Mark L. Montgomery (Eilert Lovborg) returns to Writers Theatre where he was last seen in The Letters and The Beats. Chicago credits includeTwelfth Night, Troilus and Cressida, Rose Rage: Henry VI Parts 1, 2 and 3 and others (Chicago Shakespeare Theater), Camino Real, Stage Kiss, A Christmas Carol (Goodman Theatre), Fascination (About Face Theatre Company), Want, The Time of Your Life, The Wheel (Steppenwolf Theatre Company), In the Next Room, or the Vibrator Play, Equivocation (Victory Gardens Theater), Cat on a Hot Tin Roof (Apple Tree Theatre), and In the Belly of the Beast: Letters from Prison (The Journeymen Theatre Company) as well as shows with Remy Bumppo Theatre Company and Northlight Theatre, among others. New York credits include The Seagull, Mamma Mia! (Broadway), Macbeth (The Public), The Runner Stumbles (The Actors Company Theatre) and The Madras House (Mint Theater Company). Regional Credits  include Julius Caesar (American Repertory Theater and French tour) and Emma (Cleveland Play House). Television credits include Boss, Law & Order and Guiding Light.

In an effort to promote taking public transit to the Theatre, Writers Theatre launched a new promotion in 2013. Any audience member who purchases a ticket to a Writers Theatre production and rides Metra’s Union Pacific North Line to the Theatre may snap a photo of themselves on the train and post it to their Facebook page or Twitter feed with a tag of @writerstheatre and, upon showing the post at the Writers Theatre Box Office, receive $5 in cash (in essence, paying the cost of the train ride from Downtown ($4.75)).

This promotion is available for a limited time only, and may end without warning. Ticket must have been paid for in advance.  Not valid on comp tickets.  More information available at writerstheatre.org/metra