Writers Theatre opens the 2015 tour of The MLK Project: The Fight for Civil Rights By Yolanda Androzzo Directed by Jimmy McDermott with a free performance at the Chicago History Museum on Martin Luther King, Jr. Day January 19, 2015 10:30am 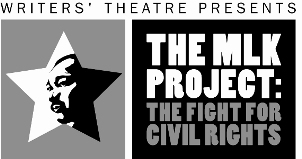 Writers Theatre opens its 9th annual tour of The MLK Project: The Fight for Civil Rights, written by Yolanda Androzzo, directed by Jimmy McDermott and featuring Caren Blackmore. A special Martin Luther King, Jr. Day public performance will take place at 10:30am on January 19 at the Chicago History Museum, 1601 N Clark Street in Chicago.  The kickoff event also includes a post-show community discussion. The event is free and open to the public, and audience members will also receive free museum admission for the remainder of the day.

Weaving together poetry, hip hop and history, The MLK Project: The Fight for Civil Rights is a one-woman show that follows Chicago student Alaya’s personal transformation through studying the Civil Rights Movement. Alaya uses her fists as an outlet for anger. After interviewing local heroes of the Movement, she discovers she can put “anger into action” and that her power is in her voice and her hip hop, not violence.

The 2015 production will tour to more than 40 venues during its 6-week run, including Chicago Public Schools, community centers, and juvenile detention centers.  All performances include a post-show discussion and study guides with wrap-around curriculum. The MLK Project: The Fight for Civil Rights will also play at the Chicago Children’s Theatre, January 24-February 6, 2015, as part of the new Later Stages series for kids ages 8 and up.  For more information or tickets for the production at the Chicago Children’s Theatre,chicagochildrenstheatre.org or call (872) 222-9555.

The 2015 tour of The MLK Project is made possible in part by support from Allstate Insurance Company, Major Corporate Sponsor, and the Dr. Scholl Foundation. Additional supporters of The MLK Project in 2015 include: Writers Theatre’s 2015 Major Education Sponsor, Northern Trust, the Paul M. Angell Family Foundation, the JCCC Foundation, Neiman Marcus Northbrook, Target, the Farny R. Wurlitzer Foundation Fund and an anonymous foundation.

Write On! a flexible artist-in-residence program customized for each school and group of students. Write On! pairs teaching artists with schools and community organizations in dynamic explorations of performance and text with a focus on encouraging young people to find their creative voices.  Writers Theatre has provided after-school drama programs, in depth Shakespeare or mythology workshops, ethnographic performance and dramaturgy units,, and poetry and writing classes in collaboration with CPS schools, community organizations and juvenile detention centers.

The Novel Series Study Plan, a cutting-edge theatre and literary arts curriculum designed to allow students to explore literature and the art of bringing text to life. Under the guidance of a Writers Theatre Teaching Artist, students engage in a layered study of a book and enter a rigorous artistic process that merges writing, discussion, and vocabulary with arts-integrated theatre projects. Residencies culminate in a final performance of student-created work as students use voice, body, and imagination to make new and exciting connections to the text.

All of Writers Theatre’s education programs are aligned with state and national Common Core standards. To learn more visit www.writerstheatre.org/education.

Over the past twenty-two seasons, Writers Theatre has become a major Chicagoland cultural destination with a national reputation for excellence. Under the artistic leadership of Michael Halberstam and the executive leadership of Kathryn M. Lipuma, Writers Theatre has been deemed the “best drama company in the nation” by The Wall Street Journal. The company, which plays to a sold-out and discerning audience of 35,000 patrons each season, has garnered critical praise for the consistent high quality and intimacy of its artistry. Prized for the finest interpretations of classic and contemporary theatre in its two intensely intimate venues, Writers Theatre’s acclaimed work includes Artistic Director Michael Halberstam’s world premiere in Glencoe and subsequent productions of A Minister’s Wife at Lincoln Center Theater and West Coast premiere at the San Jose Repertory Theatre; David Cromer’s productions of A Streetcar Named Desire and Picnic; and the commissioning, world premiere and New York premiere of Crime and Punishment, which has received more than 30 subsequent regional theater productions.

In July, 2011, Writers Theatre announced the hiring of the award-winning, internationally renowned Studio Gang Architects, led by Founder and Design Principal Jeanne Gang, FAIA, to design a new home for the Theatre in downtown Glencoe which will once again allow the Theatre to grow to accommodate its audience, while maintaining its trademark intimacy. The new facility will resonate with and complement the Theatre’s neighboring Glencoe community and will add tremendous value to Chicagoland and the North Shore as a premier cultural destination.