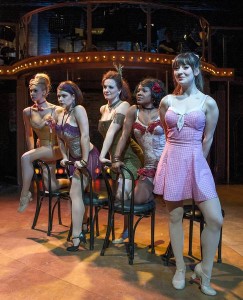 How many times can a girl make the same mistakes? Charity Valentine’s problems aren’t unique—a dead end job, a string of dates with identically flawed men and a knack for making the wrong choices. Of course, in her case the job is as a dance hall “hostess” and her dates all seem to end with her being pushed into the lake— but that won’t shake her belief that great things lie just ahead. And perhaps they do…

remaining seats for that day’s performance at a discount. When available, Tweet Seats may be purchased only through the Writers’ Theatre website at writerstheatre.org.

Writers’ Theatre is pleased to welcome back BMO Harris Bank as Season Sponsor of its 2012/13 Season.

Over the past twenty seasons, Writers’ Theatre has become a major Chicagoland cultural destination with a national reputation for excellence. Under the artistic leadership of Michael Halberstam and the executive leadership of Kathryn M. Lipuma, Writers’ Theatre has been deemed the “best drama company in the nation” by the Wall Street Journal and achieved twenty years of surplus operations. The company, which plays to a sold-out and discerning audience of 35,000 patrons each season, has garnered critical praise for the consistent high quality and intimacy of its artistry. Prized for the finest interpretations of classic and contemporary theatre in its two intensely intimate venues, Writers’ Theatre’s acclaimed work includes Artistic Director Michael Halberstam’s world premiere in Glencoe and subsequent production of A Minister’s Wife at Lincoln Center Theater; David Cromer’s productions of A Streetcar Named Desire and Picnic; and the commissioning, world premiere and New York premiere of Crime and Punishment, which has received more than 30 subsequent regional theater productions.

In July, 2011, Writers’ Theatre announced the hiring of the award-winning, internationally renowned Studio Gang Architects, led by principle Jeanne Gang, FAIA to design a new home for the Theatre in downtown Glencoe which will once again allow the Theatre to grow to accommodate its audience, while maintaining its trademark intimacy. The new facility will resonate with and complement the Theatre’s neighboring Glencoe community and will add tremendous value to Chicagoland and the North Shore as a premier cultural destination.