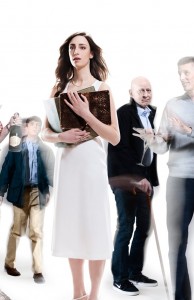 Artistic Director Michael Halberstam and Executive Director Kathryn M. Lipuma announce an additional two weeks of performances of the World Premiere of Days Like Today, inspired by the plays of Charles L. Mee with music and lyrics by Alan Schmuckler and book by Laura Eason, directed by Artistic Director Michael Halberstam with music direction by Doug Peck and choreography by Tommy Rapley.  The production, which began performances on May 6, 2014, will now run through July 27, 2014 at 325 Tudor Court, Glencoe.

Lovely, hopeful Tessa has vowed that she is through with love—despite the best efforts and conflicting advice of her parents (and their respective lovers).  After all, it’s never easy to move on before you’ve had time to heal.  But when a handsome young stranger arrives, Tessa must decide whether the idea of love might still be one worth fighting for.

With soaring melodies and lyrics that are by turns witty, wry and heartbreakingly poignant, the musical explores what it takes to sustain a relationship in a world where love sometimes seems impossible—and how the first step in finding happiness might be getting out of your own way.

Artistic Director Michael Halberstam guides this thrilling new work of musical theatre by composer/lyricist Alan Schmuckler (We Three Lizas, The Emperor’s New Clothes, How Can You Run with a Shell on Your Back?) and playwrightLaura Eason (Sex with Strangers, Ethan Frome, Around the World in 80 Days).

Days Like Today is the final production to be performed in the current facility on Tudor Court. Groundbreaking for the new theater center, designed by Chicago’s internationally renowned Studio Gang Architects, led by principal Jeanne Gang, is set for fall 2014.

Over the past twenty-one seasons, Writers Theatre has become a major Chicagoland cultural destination with a national reputation for excellence. Under the artistic leadership of Michael Halberstam and the executive leadership of Kathryn M. Lipuma, Writers Theatre has been deemed the “best drama company in the nation” by The Wall Street Journal. The company, which plays to a sold-out and discerning audience of 35,000 patrons each season, has garnered critical praise for the consistent high quality and intimacy of its artistry. Prized for the finest interpretations of classic and contemporary theatre in its two intensely intimate venues, Writers Theatre’s acclaimed work includes Artistic Director Michael Halberstam’s world premiere in Glencoe and subsequent productions of A Minister’s Wife at Lincoln Center Theater and West Coast premiere at the San Jose Repertory Theatre; David Cromer’s productions of A Streetcar Named Desire and Picnic; and the commissioning, world premiere and New York premiere of Crime and Punishment, which has received more than 30 subsequent regional theater productions.

In July, 2011, Writers Theatre announced the hiring of the award-winning, internationally renowned Studio Gang Architects, led by principal Jeanne Gang, FAIA, to design a new home for the Theatre in downtown Glencoe which will once again allow the Theatre to grow to accommodate its audience, while maintaining its trademark intimacy. The new facility will resonate with and complement the Theatre’s neighboring Glencoe community and will add tremendous value to Chicagoland and the North Shore as a premier cultural destination.