After selling out shows across Chicago, “WOZ: A Rock Cabaret,” is back by popular demand for five performances only from July 14 – 17, 2016 at Victory Gardens Theater, 2433 N. Lincoln Ave. in Chicago. Joining the original cast as the Wizard is Tony® Award-nominated actor André De Shields, Broadway’s original “The Wiz” (1975). Inspired by the beloved film The Wizard of Oz, these Ozians will follow the yellow brick road to the tune of iconic rock anthems from the ‘80s and ‘90s. It’s like your favorite radio station but better… because it has witches and munchkins!

Tickets, priced at $40, are currently available at www.victorygardens.org, by calling at (773) 871-3000 or in person at the Victory Gardens Theater box office. Students and senior discounts are available.
Performance Schedule:

About the Cast and Creative Team:

André De Shields (Wizard) In a career spanning 47 years, André De Shields has distinguished himself as an unparalleled actor, director, choreographer and educator. He is the recipient of three Jeff Awards, the first as a Director for Victory Gardens 1987 production of The Colored Museum and the remaining two as Featured Performer in a Musical: Play On! (1998) and Mary Zimmerman’s The Jungle Book (2013), both at Goodman Theatre. In fact, André’s professional career began at Chicago’s Shubert Theatre in the 1969 production of Hair. From there he moved on to The Me Nobody Knows at the Civic Opera House, and ultimately became a member of The Organic Theatre Company, where he created the role of Xander the Unconquerable, Ruler of the Sixth Dimension in the cult sensation Warp. His most recent appearance in Chicago was at the Bank or America Theatre, where he created the role of Ron in the Broadway bound musical Gotta Dance. In November 2015, Mr. De Shields received the Award for Excellence in Theatre from the Theatre School at DePaul University. A multiple Tony Award nominee, he is best known for his show-stopping performances in four legendary Broadway musicals: The Wiz, Ain’t Misbehavin’, Play On! and The Full Monty. www.andredeshield.com 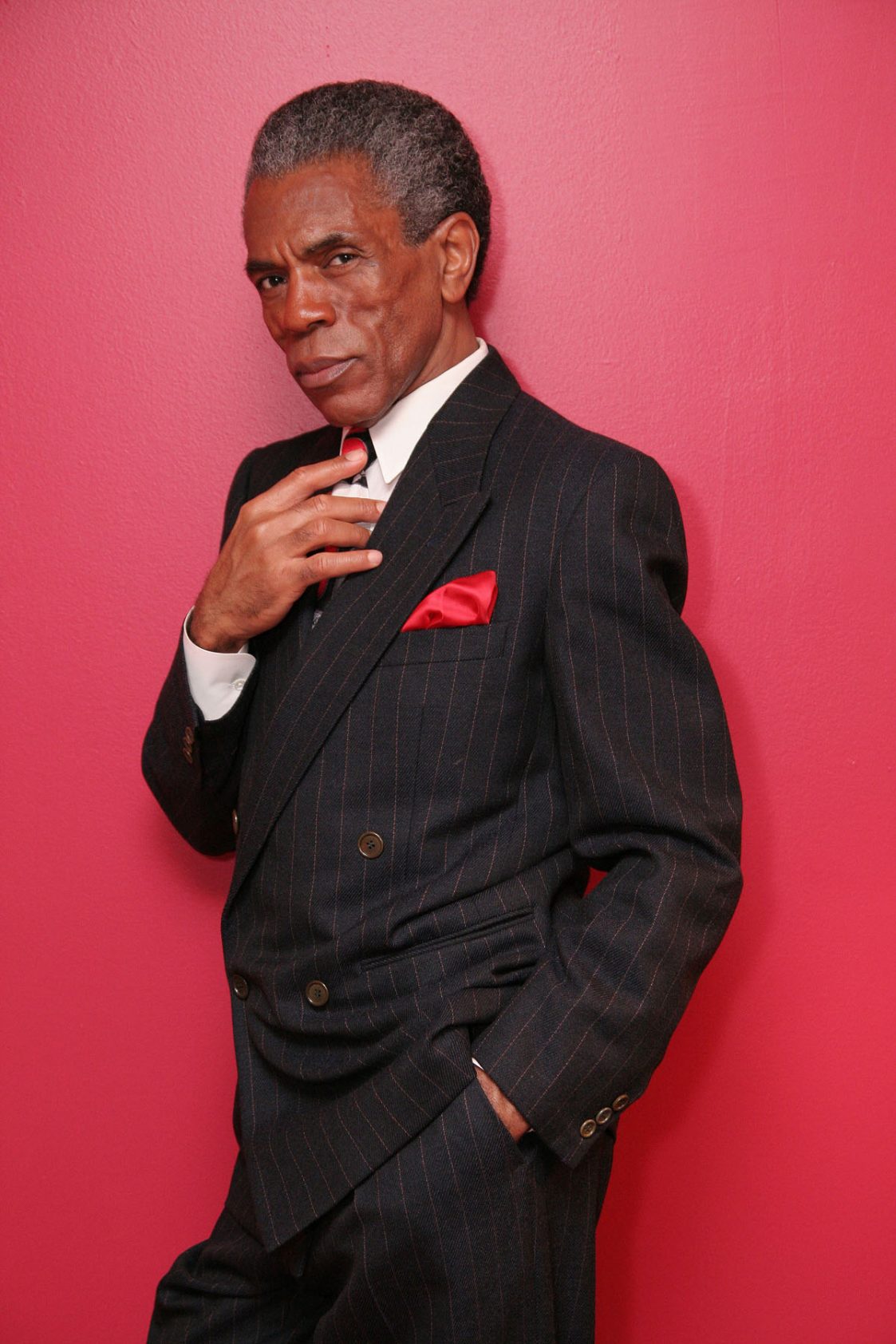 Kimberly Lawson (Creator, Dorothy) was most recently seen as Elizabeth in Victory Gardens production of Confessions of a P.I.MP., written by and starring André De Shields. A current board member of Chicago Cabaret Professionals, her cabaret shows include WOZ: A Rock Cabaret, Why Can’t a Woman: A Feminist Perspective of Broadway, Fancy Meeting You Here and Life, Love, and Faith: A Tribute to Faith Prince. She is currently a student of Nadine Gomes of the Chicago College of Performing Arts and Tony®Award Winner Faith Prince. In her non-performing life, Kimberly is the Audience Services Manager at Lookingglass Theatre.

Nick Sula (Music Director) is a pianist, arranger and award-winning music director for theater and cabaret. Theater credits include music direction at Porchlight Music Theatre, Bohemian Theatre Ensemble, Black Button Eyes Productions, Chicago Opera Vanguard and Light Opera Works. Nick is an instructor, music director and vocal coach at the Chicago College of Performing Arts at Roosevelt University. He is also an active member of the Chicago Cabaret Professionals, performing with vocalists at local venues such as Davenport’s, Uptown Underground, Stage 773, Victory Gardens, The Twisted Vine,and the Park West. Recent and ongoing cabaret projects include musical direction and arrangements for Boys in Briefs (Pride Films and Plays), vocal trio With a Twist! and Say You Love Me: Fleetwood Mac Turns 40. www.nicksula.com

Nicholas Davio (Guitar) is a Chicago-based music director, multi-instrumentalist and teaching artist who holds a Bachelor of Music degree from Millikin University, with an emphasis in Vocal Performance. Notable theater credits include The David Bowie Variety Hour (MCA Chicago), Frederick and A Year with Frog and Toad (Chicago Children’s Theatre), Alien Queen (Scooty and JoJo), Big River (Bohemian Theatre Ensemble – Jeff Nominated for Musical Direction) and The Spitfire Grill and The Robber Bridegroom (Chicago Academy for the Arts). He currently holds teaching artist positions at The Old Town School of Folk Music and Chicago Children’s Theatre.

Clara D’Onofrio (Glinda) Clara D’Onofrio is ecstatic to float her bubble back to WOZ and rejoin the fabulous and hilarious individuals that bring this show to life. Having enjoyed roles such as Luisa (The Fantasticks), Hodel (Fiddler on the Roof), and Hope Harcourt (Anything Goes), these days “Miss Clara’s” audience primarily consists of children from 4 months old to kindergarten in her Brookfield-based early childhood music school, Ms. Clara’s Mini Musicians. Clara is also a proud member of the singing wait staff of Davenport’s Piano Bar.

Edward Fraim (Lion) is excited to put on the mane again! He was seen onstage this year as Hannay in The 39 Steps (Metropolis Performing Arts), The History of Summer at Theater Wit (Pride Films and Plays), and a few other stages. He has been performing around the country since he was eight and has been in Chicago for eleven years. Some favorites include Some Men, Design For Living (Pride Films and Plays), Assassins (The GoForth), Lady Windermere’s Fan (Dead Writers), Altar Boyz (Noble Fool), Jekyll & Hyde (BoHo) and Poseidon: An Upside Down Musical, Trog!! and Reefer Madness (Hell in a Handbag).

David Lipschutz (Munchkin, Winkie Soldier) is ‘walking on sunshine’ to be back performing in WOZ! He recently directed the staged reading of Psycho Beach Party with Hell in a Handbag (company member) and performed in Mary’z with a “Z” with BPBCo. (also a company member). Other credits include productions with Pride Films and Plays, Theatre at the Center, Illinois Theatre Center and Factory Theater. By day, David acts in the courtroom.

James Nedrud (Tin Man) is so excited to be on stage with the WOZians again! He is currently playing Terpsicore in Xanadu at ATC. Recent credits include Angry Fags (Pride Films and Plays at the Stppenwolf Garage), Mary Poppins (Paramount Theatre), Les Miserables (Drury Lane Theatre), Applause (Porchlight Revisits), Three Little Pigs (Emerald City) and Under a Rainbow Flag (Pride Films and Plays – Jeff nomination for Best Supporting Actor in a Musical). A proud graduate of the Chicago College of Performing Arts, he has also worked with Chicago Shakespeare Theatre, About Face Theatre and Bohemian Theatre Ensemble, among others. www.jamesnedrud.com

Kevin Webb (Scarecrow) is thrilled to be returning to WOZ for its fourth incredibly exciting incarnation. He is a member of the Pride Films and Plays ensemble and has been featured in their productions of Songs from an Unmade Bed (Jeff nomination – Actor in a Principal Role), Under A Rainbow Flag, Angry Fags and Design for Living. Other recent credits include: The Secret Garden (Court Theatre), Sweeny Todd (Porchlight), The Duchess of Malfi (Trap Door), The Pitchfork Disney (Interrobang), Myths and Hymns (BoHo), Waking Lazarus (Prologue), Stupid F##king Bird (Sideshow), Coraline and the upcoming production of Amour (Black Button Eyes). www.kevinwebb.org

Sarah Wurz (Munckin, Winkie Soldier) is pleased as punch to be working with the WOZ gang again. She graduated from Central Michigan University with a BFA in theatre, then moved to Chicago and studied at Second City, iO and the Annoyance. You can see her playing with Thirsty at the Apollo, or slinging drinks downtown for suits.