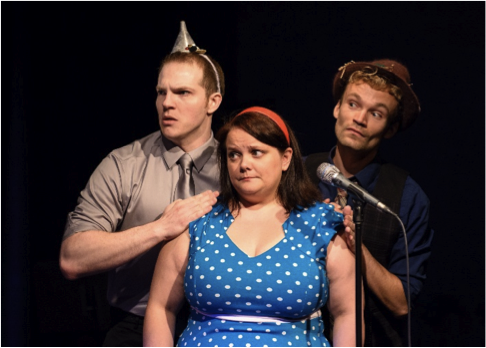 Divinity anthropomorphize. It may seem a little over the top, perhaps, but isn’t that the nature of cabaret? Let me back that statement up. Music is the heartbeat of the universe, and dreams are the soul of god, so anything that melds the two in such a way as WOZ did, must in some way be linked to divinity?

There are moments in this show I wish I could video tape add to my random shuffle list so that they will pop up now and then when the world is beating me down, cause you cannot help but feel picked up by this show, and there are moments that would make you laugh even if your own mother had just passed on. You cannot help but smile. I do advise you use the bathroom before going in to the theater,  there were moments I was laughing so hard I almost peed myself. For instance, when Glinda played by the bubbly Clara D’Onofrio, and the Wicked Which played by Heather Currie, who seems to be the strange love child of Janis Joplin and Henry Rollins, the way she belts out some of the best Angry Chick Rock, when those two squared off in an epic battle of choreography, while singing, Sweet Dreams, by the Eurythmics, this battle scene is so epic it makes the Jets and Sharks from “West Side Story” pale in comparison.

No, – there are no big production values, though the puppet are spectacular the Wizard is Amazing in his disembodied foam head guise belting Axel Rose at Dorothy and her companions. This is not ‘Wicked’, this is not a high end production this is something better. The show begins with a hummed almost choral, version of “Somewhere Over the Rainbow,” A few of the cast members step out of the chorus and share child hood memories about the Wizard of Oz. Moments of our Shared cultural experience, that everyone in the audience can, get on board with. Because, honestly if you haven’t seen the Wizard of Oz as a kid… … I’m sorry for you. Everyone in America remembers that trip over the rainbow, as kids. And as teenagers/college students watching it to Pink Floyd, while getting….er… happy? In our Dorm rooms? Or was that just me. Every one of use has memories of this film. 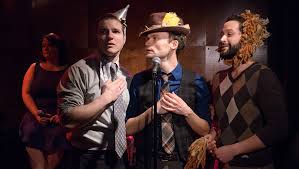 The cast shares theirs, then launches into an 80 minute version of it, that seems as if you are watching the most awesome 7 year olds, playing dress up in their living room to entertain Mommy and Daddy. You cannot, help but laugh at the wisecracks they make about the movie throughout, cause they’re things we have all thought. I have tons of quotes from the show. If I share them however I might ruin the show for you, a lot of the humor realizes on the “Holy Shi**,” did she just say that factor.  I will give you one or two examples, so as not to ruin the show, but give you some idea of what you are in for, and why you should not bring children, in case your instinct is  “oh it’s the Wizard of Oz let me bring my kid”. The Wizard at one point stares down the Scarecrow and asks, “You have the Balls, to ask for Brains,”  or when Gilda tells Dorothy (the brilliant Kim Lawson, who also co- conceived WOZ with William Rogers) , she has always had the power to return home in her heart, Dorothy replies,  “well that’s really fu*ked up.” Which when you think about it, it really is.

It is! Okay a quick aside, let’s except the premise that Dorothy who I believe is supposed to be 13(?) could have returned home at any point, just by clicking her red shoes together. By the by the red chucks Dorothy is wearing in the show; so divine, I would send an army of winged ninja monkeys after those shoes too. Rock on Ms. Gale! So Glinda, knows this the whole time, but still sends Dorothy a 13 year old girl on a perilous journey down the yellow brick road to see a perverse old man with a fetish for floating flaming head. The Wizard in turn essentially tells Dorothy to go kill a rival, the Wicked Witch.  Between the 2 of them they essentially turn a little girl from Kansas, who only wants to get home, into a freaking assassin. “You B*tch… I’m melting” If you don’t get this humor, perhaps WOZ is not for you. But for the remaining 99.99999% of you, seriously pee before you go into the theater, or you will in your pants from laughter.

As this is a musical performance I must call out a few of the songs, The Wizard (Chicago cabaret superstar Scott Gryder; who also directs alongside the amazing Nick Shula as musical director) singing Michael Jackson’s “Man in the Mirror”, was divinity, the guy looks the Perfect Peewee Herman Nerd and you cannot help but laugh, was a definite Highlight.  The Tin Man (James Nedrud) “I Wan’na Know What Love Is,” as Dorothy and the Scarecrow (Kevin Webb, whose facial contortions had me chuckling all night,) somewhat sexually lube him up from an “Oil Can,” is one of those Pee yourself Moments. I loved how the Winkie Soldiers (David Lipshultz, and the gorgeous, Sarah Wurz,) who if you do not know are the witches Palace guards, turned the “Oh Eee Oh”, chant from the movie into New Kids On the Block’s “Hanging tough”. However, the Wicked Witch was an all-consuming presence the second she hits the stage her energy drowned out the rest of the cast. No matter what song she was singing, or what part of the story line we were in she took you into her, beat the Sh*t out of you and puked you back out, with an evil cackle and a shine in her eye. What a Performance!

There were a few problems, so minor, I only mention them as to not seem to fawning on this show. First, I honestly would have like a few songs from the actual Wizard of Oz weaved into the power ballads, I mean come on? The Muppet’s “Moving Right Along” is a great replacement for “Follow the Yellow Brick Road”, true and it got a laugh. I am sure however that I was not the only one in the audience wishing I could have seen what humor your fantastic Imaginations could have pulled from “Lollipop Guild” still a minor thing, and an artistic choice.

Also I was disappointed, that you didn’t include any songs, inspired by the Wizard of Oz, Elton John, and “Yellow Brick Road” for instance. The musical numbers at time seemed reaching. And what nothing from Pink Floyd’s, “DarkSide of The Moon.” Still artistic choices, and in no way does the lack, ruin a moment of the show. Slight disappointment is all.  Second, Sound guy Brandon Moorhead, yeah I called you out by name, watch your high end. You clipped a few times. I know you are fighting a very acoustically challenging venue, but Dorothy’s high end was clipped many times during “What’s Up.”

Despite these two small challenges, WOZ: A Rock Cabaret is an excellent show. Returning us to the dreams of OZ, that is one of the many common experiences of all our child hoods, with music that brings to mind the greatness of our youths. So if Music is the heartbeat of the Universe, and dreams are the soul of god, then WOZ:  A Rock Cabaret is divinity anthropomorphized.