World Premiere of Drury Lane’s “Hazel, A Musical Maid in America” – A Working Woman in a Non-Working Musical 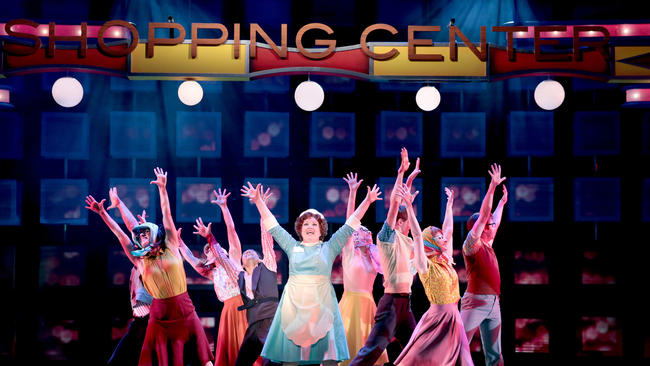 Over the many years I have been involved in the theatre I have had the misfortune to see world premiere musicals that bombed; Whatever Happened to Baby Jane, I Love Lucy, The Beverly Hillbillies and Gilligan’s Island. They all failed for much the same reasons; trite subject matter, thinly drawn plots and mediocre to horrendous scores. Therefore it was with trepidation that I went into Drury Lane’s world premiere of Hazel, A Musical Maid in America, based on the hit television series which ran from 1961-1966. Earning two Emmys for its star, the incomparable Shirley Booth. Born in 1961 I watched this show regularly and could relate, as we always had a maid with whom I spent much of my day with.

As Hazel unfolded in front of me after the opening number I could not help asking myself why waste an “A” team of talent and great sums of money on an idea that was better left on the table. They have unquestionably assembled an outstanding cast and orchestra who have impeccably sharp comic timing and great chemistry with one another. But the score of unmemorable songs which seem half-baked coupled with a thin plot line does not make for a satisfying meal of theatrical faire. There are shows that are stage worthy and those that are not; Hazel, A Musical Maid in America fits into the latter category.

The book by Lissa Levin, although grasping and thin, has some very clever and funny lines (even though the humor is definitely not in sync with 1963 values). It is very funny. However taking a 30 minute episode of a sitcom and stretching it into two hours of entertainment while crafting a score that will hopefully not only fit with the style of the show but also have some memorable songs in it is a risky proposition from the start. The ingredients of Hazel leave one with a taste of spices which do not complement one another.

The plot of the new musical Hazel, A Musical Maid in America combines aliens, a love affair for Hazel with a man named Bonkers Johnson, and Mrs. Baxter, the mother of Harold Baxter, venturing into a male dominated workplace for the first time. The modernity of Hazel, A Musicla Maid in America is reflected in the great set design by Kevin Depinet. After all this is the era where we set a man on the moon and space was at the front and center of the nation’s psyche. However I think if the creators could focus the plot more on two instead of three plot lines it would give more coherence and the show would gel. This would also deepen the main theme of women leaving the home to join the male dominated workforce and the stresses of balancing career and family. This is some pretty serious subject matter. However in this musical is comes off as trite. I never connected to the stressful situation of the Baxters (this is a comedy but it should have had some dramatic moments to give it weight). With so many plot lines to follow they are only able to skim the surface.

At the helm they have wisely chosen Klea Blackhurst as the iconic Hazel and it is clear from her first entrance down the aisle (a tribute to Gypsy) that she commands it. Bearing an uncanny resemblance to the Hazel of Shirley Booth’s hit 1960s television show it is as if she is almost channeling her spirit. She is the reason to venture out to see this show. But it makes me question how other theatre companies will be able to produce this without having her in it. It is so finely tailored to her unique blend of comic sensibility, strong resemblance to Shirley Booth both vocally and physically and her sheer stage charisma that it demands her presence. This could be a good thing for her if it takes off, which will remain to be seen. There is the possibility of community and regional theatre picking it up but Broadway bound material it is not.

With a half-baked score by Ron Abel (music) and Chuck Steffan (lyrics), comprised of a series of seemingly incomplete and forgettable songs Hazel, A Musical Maid in America would actually, in my opinion, work better as a straight comedy. I have heard some bad scores in premiere musicals in my time but I must give this its special place; it is disjointed, stops all action of the piece and does not fit the 60s sound; it comes off sounding too modern and the songs seem to stop short, leaving us, as an audience wondering what the song was about in the first place and why it has been written.

Joshua A. Bergasse, Director and Choreographer has done an exceptional job with the pace and timing, however, his choreography was stylistically all over the place and did not give the feel of 1963.

Roberta Duchak leads a fine orchestra and has done a superb job with the singers (diction was flawless).

The Scenic Design by Kevin Depinet is, as usual, extremely detailed, highly functional and well thought out.

The one indelible thing I will remember fondly about Hazel, A Musical Maid in America is the dynamic performance of Klea Blackhurst, a force of nature with a voice and presence that knocks you out of your seat. Hazel, A Musical Maid in America runs through May 29th at the Drury Lane Theatre, 100 Drury Lane in Oakbrook Terrace. Tickets may be purchased form the Drury Lane Box Office 630-530-0111 or at Ticketmaster 800-745-3000.