cialis online339″ height=”226″ />It has been a few years now since I saw the transferred London production of the highly conceptualized and emotionally jarring War Horse, but the one thing that has remained constant in Joey’s journey stateside is his humanity.

Based on Michael Morpugno’s 1982 novel, the epic story of a boy and his equine soul mate was adapted for the British stage in 2007 by Nick Stafford with direction by Marianne Elliott and Tom Morris. The 2011 Broadway production won five Tony awards including Best Play. War Horse implements magnificent stylized puppetry that makes these majestic animals so lifelike that the fourth wall is barely existent and the connection between horse and audience is very real. There is nary a dry eye in the house by the final curtain and Joey constantly receives a standing ovation.

As I mentioned before, more than any other play in recent memory, War Horse is an epic in every sense of the word (even moreso then the bland Stephen Spielberg film adaptation). This is reinforced by the National Tour’s stop at the Cadillac Palace Theatre where War Horse is afforded the physical space to tell its tale as opposed to the much more intimate theatres in both London and New York. At the Palace, War Horse is a theatrical feast that takes your breath away from the first scene were a little foal Joey gets his bearings. The theatrical pacing is brilliant has this device allows the audience to become instantly invested in Joey’s welfare. Thus when Joey bonds with his “owner” Albert (played to perfection by Andrew Veenstra) the humanity of the story is cemented and we are as much a part of the play as the actors themselves.

And what a journey it is. Taking place in rural England on the brink of World War I, we see a lonely boy, Albert who instantly bonds with the young Joey. Though one is human and one animal, both have had to face abuse, neglect and abandonment and in a way find salvation in each other. As war breaks out, the horses are claimed by the British military and Joey is no exception. Horse and master are separated as the play shows the hell of wartime and the contributions and sacrifices these animals made. By the end of the play when Joey and Albert are both broken and battered, as an audience member, you are also physically and emotionally exhausted. What War Horse does more than anything is show how love for an animal is innate and universal. Whether it is the German Reich or the British Army, the constant is the bond between man and “beast”; and that more than anything, is the truth of actor’s actions in War Horse.

Much like the recent Black Watch, War Horse is more a theatrical experience than just a play. The use of music, dance, cinematography and puppetry all intricately combine to make the piece a whole, including a very large ensemble of actors. But it is the puppeteers that give the show its emotional gravitas. They are graceful, knowledgeable and every bit an actor as their “human” counterparts. The art of puppeteering, whose movement and choreography was created by Toby Sedgwick, is taken to a new level with War Horse, just as Julie Taymor did with The Lion King.

The tour mirrors that of the sit-down productions and director Bijan Shebiani has adhered to Ms. Elliott’s and Mr. Morris’ original intent and vision while assembling a cast that is every bit as good, if not better than the London and Broadway incarnations (many of the cast have been involved in prior productions). Technically, War Horse is also a marvel. The sets, costumes and drawings by Rae Smith are spot-on and the animation and projection design by 59 Productions add to the scope of the work. But it is the horses that people come to see and their multi- award winning design by Adrian Kohler and Basil Jones for the Handpring Puppet Company are revolutionary. 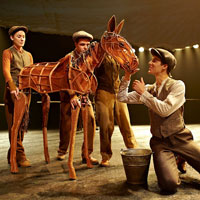 War Horse is one of those experiences you will always remember. It is a reminder of the silent bond we have been blessed with between animal and human. It is the spirituality of that bond that makes War Horse resonate and qualifies it as one of the best plays ever written. We all would be better people if we each had a Joey in our life.