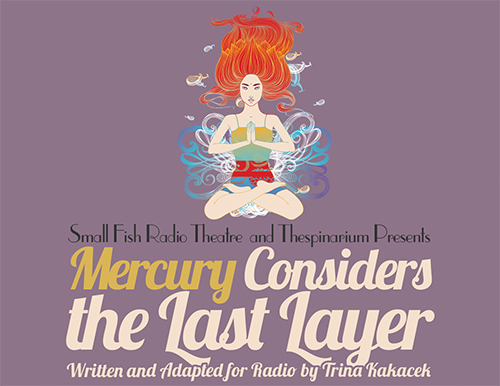 Victory Gardens Theater hosts Small Fish Radio Theatre and Thespinarium for a one-night-only performance of the radio adaptation of Mercury Considers the Last Layer, written and directed by Trina Kakacek. Mercury Considers the Last Layer is a melodramatic romp, set in the dualistic world of burlesque, which follows the age-old quest of finding one’s heart and one’s self. Mercury was developed in the Victory Gardens Access Project Artist Development Workshop, with the lead male role written for actor, writer and Thespinariam Michael Herzovi. This special performance, which includes open captioning and American Sign Language interpretation, is meant for a mature audience. The performance is Sunday, August 3, 2014 at 7:30PM in the Zacek-McVay Theater at the Victory Gardens Biograph, 2433 N. Lincoln Avenue in Lincoln Park.

“The Access Project has remained a unique program for people with disabilities because in addition to the services we provide, we are able to produce work like Mercury,” says Victory Gardens Artistic Program Manager Monty Cole. “Victory Gardens is so thrilled to have a piece of work that was developed in our Artist Development Workshop showcased on our largest stage.”

Mercury writer and director Trina Kakacek adds, “The bottom line is that the Access Project is this play’s home. It’s where I went from being a fiction writer to being a playwright. I went in there a million years ago with my first play, which looked more like a book that happened to have half the dialogue in it. I learned to switch from writing novels to writing plays there at the Access Project.”

About the Access Project
Now in its 21st year, the Access Project is a nationally recognized model outreach effort designed to involve people with disabilities in all aspects of theater, both on and off the stage. In 2008 Victory Gardens received the MetLife Foundation Award for Excellence and Innovation in Arts Access, and in 2009 we were named Most Accessible Theater by the members of Deaf Illinois.

Visit www.victorygardens.org and click on “Plan Your Visit” for information about other Access services including large print and Braille programs, assisted listening devices, and artist development workshops.

About Victory Gardens Theater
Under the leadership of Artistic Director Chay Yew and Managing Director Christopher Mannelli, Victory Gardens is dedicated to artistic excellence while creating a vital, contemporary American Theater that is accessible and relevant to all people through productions of challenging new plays and musicals. With Victory Gardens’ first new Artistic Director in 34 years, the company remains committed to the development, production and support of new plays that has been the mission of the theater since its founding, continuing the vision set forth by Dennis Zacek, Marcelle McVay, and the original founders of Victory Gardens Theater.