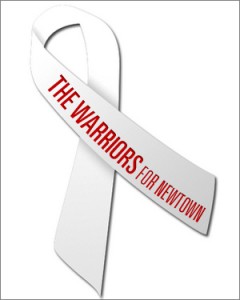 Victory Gardens Theater announces The Warriors for Newtown, a benefit to support the Sandy Hook Elementary Victims Relief Fund.  The evening will include a one-night-only reading of The Warriors by Evan Linder, conceived by Mary Hollis Inboden with contributions by Sarah Gitenstein, Wes Needham, Whit Nelson, Nicole Pellegrino and Michael Peters, followed by a community conversation.  Kimberly Senior will direct the benefit reading.  The Warriors for Newtown will be held on Sunday, January 6, 2013 at 7:30 p.m. at the Victory Gardens Zacek McVay Theater, 2433 N. Lincoln Avenue, in the heart of Chicago’s Lincoln Park neighborhood.

At 12 years old, Chicago actress Mary Hollis Inboden survived the Westside Middle School massacre, one of the most shocking events of the 90s.  But who writes history when nobody’s the victor?  In an honest and irreverent homecoming that mixes fact, fiction, identity, and history, Mary Hollis recruits an ensemble of her former classmates to help capture their stories, not of the tragic event that unites them, but of the daily battles and triumphs that define their present.

Mary Hollis Inboden channeled her survivors’ guilt into something productive; she reached out to her classmates, now adults, who also survived the shooting, and with their help and the help of some of her friends in Chicago, she wrote The Warriors, which was produced by The New Colony in the spring of 2011.

“With this national tragedy, I can’t help but think back to March of 1998, when at 12 years old my best friend Paige and four others were shot and killed on our school playground just feet in front of me. The shooting at Westside Middle School in Jonesboro, Arkansas, occurred just 13 months before the even deadlier incident at Columbine High School,” comments Mary Hollis Inboden.  “Talking about my own experience as a survivor in the immediate aftermath of this fresh incident feels inappropriate.  Our focus should be completely on the children and families of Newtown.  And yet, like all of us, I want to be able to contribute something to the healing process.  In thinking about The Warriors again, I think I’ve found a small way I can contribute – by presenting a staged reading of The Warriors as a benefit for the people of Newtown, Connecticut. I know from experience one of the most critical matters will be the continued support of the mental well-being of those affected by the tragedy.  We intend for this benefit to support those efforts.”

“Victory Gardens has a tradition of partnering with artists and community organizations,” says Interim Managing Director Christopher Mannelli. “The entire staff here has been deeply affected by this tragedy, and feels fortunate that we are able to host Mary Hollis Inboden for the reading. We hope that through the arts, we can make even a little difference to residents of Newtown while inspiring dialogue here in Chicago and, perhaps, even to help us work through our own feelings of helplessness, shock and grief.”

Tickets for The Warriors for Newtown are priced at $15 with all proceeds going to the Sandy Hook School Support Fund.  Tickets are available at the Victory Gardens Box Office at 2433 N. Lincoln Avenue; 773.871.3000 (TTY: 773.871.0682), or visit http://www.victorygardens.org/thewarriors. Online fees may apply.

For those unable to attend, donations can be made directly to the Sandy Hook Elementary School Victims Relief Fund by visiting https://newtown.uwwesternct.org/

The Warriors was originally produced by The New Colony March 17, 2011 – April 17, 2011 at The Second Stage under the direction of Benno Nelson.

Under the leadership of Artistic Director Chay Yew, Victory Gardens Theater is home to the bold voices of world premiere theater.  The company features the work of its own Playwrights Ensemble, as well as that of exciting playwrights who are changing theater in the U.S. and abroad.   Since its founding in 1974, the company has produced more world premieres than any other Chicago theater, a commitment recognized nationally when Victory Gardens received the 2001 Tony Award for Outstanding Regional Theatre.  The company’s dedication to developing, supporting and producing new work makes Victory Gardens an American Center for New Plays.

In 2006, Victory Gardens successfully completed an $11.8 million renovation of Chicago’s famed Biograph Theater, and moved two blocks north from its longtime venue at 2257 N. Lincoln Avenue, to its beautiful new home in one of Chicago’s most celebrated historic landmarks.  Renamed Victory Gardens Biograph Theater, the new venue is a state-of-the-art 299-seat mainstage which has greatly expanded the company’s artistic flexibility, while enhancing Victory Gardens’ ability to welcome patrons old and new.

In 2009, Victory Gardens completed the second phase of renovation at the Biograph, building an intimate, new, 109-seat studio theater on the second floor.  On March 1, 2010, at a special launch event for Victory Gardens $1 million Campaign for Growth, the theater’s new studio was officially named the Richard Christiansen Theater, in honor of the Chicago Tribune chief critic emeritus and longtime champion of Chicago’s live theater scene.