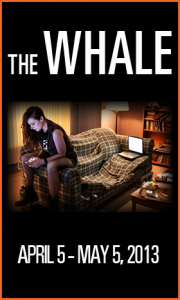 Victory Gardens continues its 2012-13 season with the Midwest Premiere of The Whale, written by Ensemble Playwright Samuel D. Hunter and directed by Joanie Schultz. The production runs April 5 – May 5, 2013 at the Victory Gardens Biograph Theater, 2433 N. Lincoln Avenue in Lincoln Park. The Press Opening is Monday, April 15, 2013 at 7:30 p.m.

Since the death of his boyfriend, morbidly obese 600 pound Charlie has confined himself to his small Idaho apartment and is eating himself to oblivion. With his health quickly failing, Charlie becomes desperate to reconnect with Ellie, his estranged and angry teenage daughter whom he has not seen in 17 years. He would give her anything: his love, his money….maybe even his life. Written by Obie Award-winning playwright Samuel D. Hunter, The Whale is a tough, humorous and emotionally powerful play about how we cope with loss, and how new definitions of family, friends and religion shape our lives.

This production is partially sponsored by Bill and Orli Staley

“I’d like to welcome our ensemble playwright Samuel D. Hunter to our theatre with the Midwest premiere of The Whale,” said Artistic Director Chay Yew. “I first met Sam at the O’Neill Playwrights Conference in 2005.  Reading his plays, I was amazed by Sam’s immense talent of capturing emotional complexity and his frank depiction of white working class Americans. He manages to excavate the extraordinary in ordinary Americans, making inarticulate, invisible people our heroes. We discussed collaborating on future projects, which led to my directing a reading of The Whale at Denver Center of the Performing Arts in 2010. This haunting, emotionally searing drama about the complex relationship between an obese gay man and his estranged daughter remained very close to my heart. I knew this play had to be experienced in Chicago and at our theatre. And I knew Sam belonged in our Playwrights Ensemble where he will write about our own working classes in his new plays for Victory Gardens.”

Joanie Schultz (Director) is a freelance director in Chicago. She recently directed the Chicago premiere ofNeighborhood 3 at Strawdog Theatre and Luther at Steep Theatre, where she previously directed The Receptionist, A Brief History of Helen of Troy and the Jeff Award winning In Arabia We’d All be Kings. Last season, she directed the world premiere of fml: How Carson McCullers Saved My Life by Sarah Gubbins at Steppenwolf Theatre; The Girl in the Yellow Dress by Craig Higginson at Next Theatre; Ask Aunt Susan by Seth Bockley for The Goodman Theatre; and the The Kid Thing by Sarah Gubbins, a co-production of About Face Theatre and Chicago Dramatists. Also recently in Chicago she directed The Metal Children at Next Theatre; Wreckage and Many Loves for Caffeine Theatre; Shining City for Redtwist Theatre; The Ring Cyclefor the Building Stage; and A Perfect Wedding and Stone Cold Dead Serious for Circle Theatre. Ms. Schultz has directed the operas New York Stories, Savitri, and The Telephone for Chicago Opera Theater and National Opera Week; and Acis and Galatea at Chicago Cultural Center. Ms. Schultz holds an MFA from Northwestern University; was a Drama League Fellow; The Goodman Theatre’s Michael Maggio Directing Fellow; the SDC Denham Fellow; was a participant in the Lincoln Center Theater Directors Lab; and currently teaches directing at Columbia College Chicago.

Leah Karpel (Ellie) returns to Victory Gardens for The Whale. Previous VG credits include:  We Are Proud To Present A Presentation…, and The Shotgun Message (Ignition Festival). Other Chicago credits include The Glass Menagerie, The Hot L Baltimore (Steppenwolf Theatre); Punk Rock (Griffin Theatre); and Feet Of Clay(Last Match Theatre). Regional credits include Ten Chimneys (Milwaukee Rep); Half And Half (Penguin Rep);The Play About My Dad (CollaborationTown); and Evanston: A Rare Comedy (HERE Arts/PS 122). Next for Karpel is Neighborhood 3: Requisition Of Doom at Strawdog Theatre Company. Leah received her BFA from Boston University and is a graduate of The School at Steppenwolf.

Will Allan (Elder Thomas) is making his Victory Gardens debut. He was last seen in Chicago as “Stevie” inGood People at the Steppenwolf Theatre. His other recent Chicago credits include The March and A Separate Peace (Steppenwolf Theatre), The Seagull and Dartmoor Prison (Goodman Theater) The Goat, or Who Is Sylvia? (Remy Bumppo Theatre Co.), The History Boys (TimeLine Theatre Co.), and Romeo and Juliet andMuch Ado About Nothing (First Folio Theatre). He has also worked with Strawdog Theatre, Chicago Children’s Theatre, and American Theater Company. He is an Associate Artist with TimeLine Theatre Company. He attended North Central College in Naperville, IL and also studied at the Moscow Art Theatre School and with LAByrinth Theater Company.

Dale Calandra (Charlie) has appeared in over 200 productions. Career highlights include: “Edna” in the 1stNational Tour of Hairspray, “Puck” in A Midsummer Nights Dream (Festival Theatre), “Squeaky Clean” in the world premiere of Stephan Daly’s Lifeidreamedof (Center Theater), “Otto” in The Food Chain (Organic Theatre), “Allen Ginsberg” in The Chicago Conspiracy Trial (Remains Theater) and several seasons as “Mr. Fezziwig” in Goodman Theater’s annual A Christmas Carol. TV and film credits include “Enrico Caruso” in The Untouchables, and “Leo Persini” in Joshua with Tony Goldwyn and F. Murray Abraham. Dale has directed over 100 productions.  As a Founder/Interim Artistic Director of Center Theater Ensemble in Chicago, he directed, produced, acted and was Creative Director for The Training Center for the Working Actor, Chicago’s Top Acting school for 20 years. Center Productions include The Scarecrow, a wireless version of Peter Pan, Kingdom Of Earth, Blithe Spirit, The Marriage of Bette and Boo, and the cult classic Lysistrata 2411, A.D. published by Doubleday (1995) with productions across the country annually. For 12 years, he was Artistic Director of Festival Theatre, Illinois’ oldest outdoor Shakespeare Company. Productions include a rock-n-roll Taming of the Shrew, The Tempest starring Tom Mula, Hamlet starring Henry Godinez, and his award-winning adaptation of Cervantes’ The Adventures of Don Quixote. He recently directed the hit production of Sweet Bird of Youth at The Artistic Home. Calandra has specialized in directing one-person shows including Tom Mula’s Circus of Dr. Lao (Next Theater), Rob LaMont’s Wit, Wisdom & Romance (Cuneo Museum Theater), and Denise LaGrassa’sIs There Anything Really Going On Upstairs? (Royal George Cabaret). He also has developed club performances for The Sparkle Sisters, Shane Taylor, Thalia Tarsino & Robin Trilling, Charles West, Carol Moss and Becky Menzie. In 2008 he created the character: Aunt Lola Cabana: “America’s Favorite Aunt!.”  Aunt Lola is a HOST for corporate events, special appearances, benefits, roasts, and a Tupperware Party Show. Aunt Lola also appears on a regular basis at Mama Mac’s Cabaret in Downers Grove.

All performances are free of charge for The Whale ticket holders.

Grossed Out
Martha Nussbaum and Sam Hunter in conversation
Sunday, April 7 at 1:30 PM

Meet Charlie. He’s 600 pounds, gay, and literally eating himself to death. Join Martha Nussbaum (From Disgust to Humanity) – one of America’s most influential philosophers and authors – and playwright Sam Hunter as the pair examine how the “politics of disgust” have been used throughout history to transform people into things that gross you out.

Windy City Media hosts a pre-show cocktail hour at Bar Forza and a post-show conversation on the LGBT issues in and around The Whale.

Our Actions Here on Earth
A Work-in-Progress Screening and Conversation
Thursday, April 11 at 6:30 P
Controversial, clean-cut, and spreading like wildfire, Mormonism is the fastest growing religion in U.S. History. Join filmmaker Xan Aranda for this special sneak peek of her upcoming film, Mormon Movie. In it, Aranda explores the community she left behind at age 16 through the lens of the religious educational films her mother starred in as a young student at Brigham Young University in the 60’s.

Theater artist Dani Bryant of Knife And Fork Chicago (http://www.knifeandforkchicago.org/) will create an ongoing theatrical response to issues of body politics present in The Whale. The response will take place in several installments throughout the run of the show.

A full and updated schedule of special events, post show discussions and presentations centered around performances of The Whale is available at www.victorygardens.org.

Word for word captioning for patrons who are hearing impaired

Sign language interpretation for patrons who are deaf or hearing impaired

Victory Gardens is the winner, Best Accessible Theater, Deaf Illinois Awards 2009.  Seewww.victorygardens.org and click on “Enhance Your Visit” for information on other Access services including large print and Braille programs, assisted listening devices, and artist development workshops as well as a full schedule of special events, post-show discussions and presentations.

By CTA train, take the Red, Purple or Brown lines to the Fullerton stop.  Walk east on Fullerton to Lincoln, then north 1/2 block to the theater.   The #8 Halsted, #11 Lincoln,  #37 Sedgwick/Ogden, and #74 Fullerton CTA buses all stop at the corner of Fullerton and Halsted, 1/2 block south of the theater.  Seetransitchicago.com for times and routes.

See www.victorygardens.org for a list of Victory Gardens’ neighborhood dining partners.  Each is within walking distance of the Biograph, and all offer a special discount to patrons who present a Victory Gardens ticket stub.

Under the leadership of Artistic Director Chay Yew, Victory Gardens is dedicated to artistic excellence while creating a vital, contemporary American Theater that is accessible and relevant to all people through productions of challenging new plays and musicals.  With Victory Gardens’ first new Artistic Director in 34 years, the company remains committed to the development, production and support of new plays that has been the mission of the theater since its founding, continuing the vision set forth by Dennis Zacek, Marcelle McVay, and the original founders of Victory Gardens Theater.

in the heart of Chicago’s Lincoln Park neighborhood