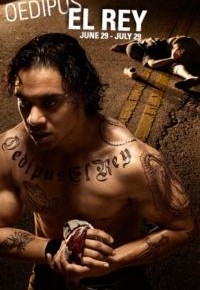 In association of its current production Oedipus El Rey, Victory Gardens announces the latest offerings from its DIG DEEPER series. DIG DEEPER are events that offer in-depth investigation of themes and ideas that are being explored in Oedipus El Rey, written by Luis Alfaro and directed by Artistic Director Chay Yew. Discussions about gang-affiliated youth, moderated by Luis Alfaro, will take place Saturday July 14 and 21; and Yo Solo, excerpts from two solo productions, will take place post-show on July 20 and 27, 2012.

In addition, there will be post-show discussions with playwright Luis Alfaro after every Wednesday and Thursday evenings.

Dig Deeper: “What do we do?” discussions

Victory Gardens will host “What do we do?,” a two-part discussion series on gangs–one of the most relevant topics affecting modern urban life. The series will take place between shows on July 14 and 21, 2012 at 6:00pm. Playwright Luis Alfaro will lead gang-affiliated youth in a discussion about why our youth join gangs and what we can do to help them see alternatives. Co-presented with BUILD, SER Central States, Enlace Chicago, and Southwest Youth Collaborative.

The discussions will be held in Victory Gardens’ Richard Christianson Theater between performances of Oedipus el Rey. The panel discussions are free, but will fill up quickly. To RSVP call the Box Office at 773.871.3000.

Dig Deeper: Yo Solo at Oedipus el Rey is a collaboration between Teatro Vista and Collaboraction, and hosted by Luis Alfaro after the show on Friday, July 20 and 27, 2012. Excerpts from the play Empanada for a Dream, written and performed by Juan Villa and directed by Alex Levy will be performed July 20; Excerpts from Para Graciela, written and performed by Sandra Delgado and directed by Cheryl Lynn Bruce will be performed July 27. There is no charge for this presentation with a ticket to Oedipus el Rey.

In Luis Alfaro’s thrilling reboot of the daddy of all tragedies, a young Chicano ex-con sets out to be the king of the Los Angeles gangland, fighting against the vicious cycle of fate and violence that awaits him. Set amid the sizzling rhythms and explosive violence of a California barrio, Luis Alfaro’s Oedipus el Rey is a sexy, modern take on a classic.

“In Oedipus el Rey, Luis Alfaro asks the questions of fate and violence, ‘Is the fate of a person of a certain race and class to remain trapped in a system no matter how hard he or she tries to escape?’ ‘Is prison culture and violence cyclical?’ ‘Why is our system not working?’ As Chicagoans, these problems remain very close to home, so asking these questions about what we can do as citizens to better understand our roles and gang violence are important and timely. Oedipus el Rey is a vivid and epic window into an underrepresented group of Americans—a view that I hope raises some very important questions about what we might do to heal our city and nation,” says Chay Yew.

Under the leadership of Artistic Director Chay Yew and Executive Director Jan Kallish, Victory Gardens is dedicated to artistic excellence while creating a vital, contemporary American Theater that is accessible and relevant to all people through productions of challenging new plays and musicals. Victory Gardens Theater is a leader in developing and producing new theatre work and cultivating an inclusive theater community. Victory Gardens’ core strengths are nurturing and producing dynamic and inspiring new plays, reflecting the diversity of our city’s and nation’s culture through engaging diverse communities, and in partnership with Chicago Public Schools, bringing art and culture to our city’s active student population.