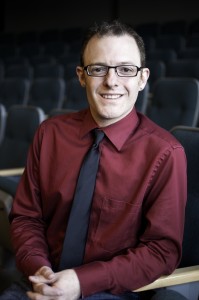 Artistic Director Chay Yew and Board President Steve Miller announce the appointment of the theater’s new Managing Director, Christopher Mannelli.  Mannelli joined Victory Gardens as General Manager in 2010 and has been Interim Managing Director since November 2012.

Board President Steve Miller comments, “The Board of Directors was unanimous in its decision to offer Chris the position of Managing Director at Victory Gardens. Over the past months, he has used his numerous talents and impressive leadership skills to guide the organization through this time of transition. With his demonstrated track record of success at Victory Gardens and throughout his career, it was clear to the Board that we have the right leadership in place to take this institution into the future.”

Chay Yew adds, “Throughout our transition, Chris has been an indispensable partner in leading our theatre. He is a passionate collaborator and skillful administrator and he has stabilized and strategized our finances, making a reality of several of our key artistic programs.  I’m excited to have Chris continue our work together at Victory Gardens as Managing Director.”

Christopher Mannelli joined Victory Gardens in 2010 as General Manager, overseeing administration and operations for the organization and was appointed Interim Managing Director in November 2012. He previously served as Deputy Director at Chicago Shakespeare Theater, managing operations and helping to produce the company’s international programming.  In 2009, Mr. Mannelli earned a master’s degree in Arts Leadership through a joint program of DePaul University and Chicago Shakespeare Theater.  Prior to moving to Chicago, Mr. Mannelli was Managing Director of HotCity Theatre in St. Louis, Missouri, an award-winning midsized professional theater. In this capacity, he was instrumental in the company’s financial and programmatic growth, which included educational outreach programs, new play initiatives and several collaborations with prominent arts organizations. Before working in administration Mr. Mannelli toured nationally and internationally as an actor and a musician.

Mr. Mannelli serves on the community board of Emerald City Theatre and on the Board of Directors of the Lincoln Park Chamber of Commerce. Christopher holds a bachelor of arts in Opera Performance and Theater from the SUNY Geneseo School of Performing Arts and a master of fine arts in Arts Leadership from DePaul University.

Under the leadership of Artistic Director Chay Yew and Managing Director Chris Mannelli, Victory Gardens is dedicated to artistic excellence while creating a vital, contemporary American Theater that is accessible and relevant to all people through productions of challenging new plays and musicals.  With Victory Gardens’ first new Artistic Director in 34 years, the company remains committed to the development, production and support of new plays that has been the mission of the theater since its founding, continuing the vision set forth by Dennis Zacek, Marcelle McVay, and the original founders of Victory Gardens Theater.