Victory Gardens’ DEATH AND THE MAINDEN: Heavy Themes But Light on Tension

Recommended: TheatreInChicago.com Review Round Up

After 17 years of harrowing political dictatorship, the people in playwright Ariel Dorfman’s unnamed country are finally free of the torture and brutality that marked the regime. Yet justice, especially for those who experienced first-hand the cruelties of tyranny, is a slow and jagged process. Death and the Maiden, which Chilean-born Dorfman penned 20 years ago after the fall of the Pinochet, attempts to wade through themes of trust and betrayal in the wake of terror.

We first meet Paulina (Sandra Oh), gun in hand, as she cowers behind a curtain, terrified of the unknown car that has pulled into the driveway of her beach home. But it’s just her husband, Gerardo (Raul Castillo) who got a lift from a stranger thanks to an unfixable flat tire. Paulina has lived the last 15 years timid and afraid, with her lawyer-turned-politician husband as her only confidant. Happiness, it seems, has been elusive for Paulina ever since she spent two months being raped and tortured by a doctor and his lynch men, a seemingly common pastime of the recently overruled dictatorship.

Gerardo, jovial from his recent promotion into a high-ranking presidential commission, asks the stranger, Roberto (John Judd), to have a drink and then stay the night. But Paulina, lurking behind a doorway on scenic designer William Boles’ ambitious, rotating set, is convinced that Roberto is the doctor who held her as a political prisoner more than a decade ago. The sound of his voice, his smell, his skin and even his love of Schubert, which he played during torture exercises, all weigh on Paulina, and she snaps. Soon, the doctor is bound and gagged, and Paulina, her ferocity awakened, is holding him at gunpoint. 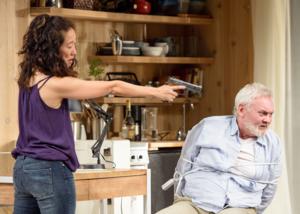 Sandra Oh, fresh from her 10-year, Emmy-winning stint on Grey’s Anatomy, is the show’s anchor. Paulina is a jumble of hurt and pain and anger, allowing Oh to show her true versatility on the stage. We’re rooting for her, even if we’re doubtful of her true mental state. Castillo works Gerardo’s political ambitions, but his lack of shock at his wife’s actions—which put his hard-fought career in jeopardy— contributes to an overall lack of tension. Much of the play’s midsection surrounds Paulina trying to convince Gerardo (and maybe herself) that her accused tormentor needs to be brought to justice. And Gerardo plays along.

The gravity of Paulina’s actions soon dissipates from a scene that should be taut and strained with moral ambiguity. Instead, the scene doesn’t feel fully fleshed-out, which results in a play that isn’t quite the thriller it could be. The heavy themes and rich subject matter are there—the tension is not.

Victory Gardens Theatre’s Death and the Maiden runs through Sunday, July 20. Tickets can be purchased at 773-871-3000. For more information, visit victorygardens.org.  For calendar information visit TheatreInChicago.com