Underscore Theatre Company’s World Premiere of THE STORY OF A STORY (THE UNTOLD STORY) Runs Through Nov. 8 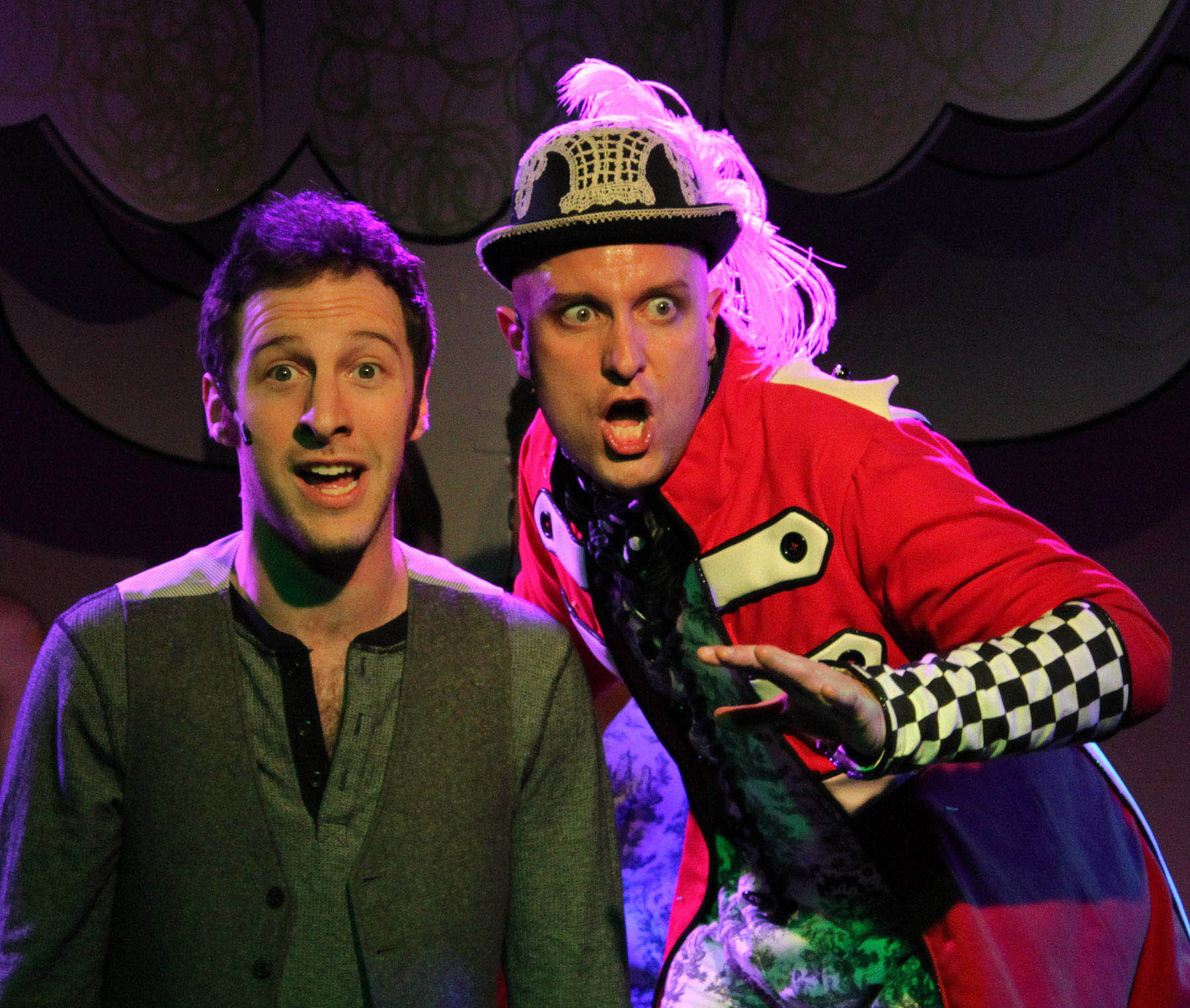 “World of Your Nightmares” (left to right) Max DeTogne and Kevin Bishop in Underscore Theatre Company’s world premiere musical comedy THE STORY OF A STORY (THE UNTOLD STORY) with book and lyrics by Peter Gwinn, music by Jody Shelton and direction and choreography by Christopher Pazdernik. Photo by Alex Higgin-Houser.

From the comedic minds behind The Colbert Report and Fifty Shades! The Musical, Underscore Theatre Company is pleased to present the world premiere musical comedy THE STORY OF A STORY (THE UNTOLD STORY) with book and lyrics by Emmy Award-winning writer Peter Gwinn (The Colbert Report), music by Jody Shelton (Fifty Shades!), direction and choreography by Christopher Pazdernik, associate direction by Jon Martinez and music direction and orchestrations by David Kornfeld. THE STORY OF A STORY (THE UNTOLD STORY) will play October 3 – November 8, 2015 at the Chopin Theatre, 1543 W. Division St. in Chicago.  Tickets are available at www.underscoretheatre.org or by calling (312) 646-0975.

THE STORY OF A STORY (THE UNTOLD STORY) is a musical comedy about a writer and artist who must prevent an invasion of our world by a magical land of cliches. Journeying through the magical dimension, assisted by a band of rebel cliches who dream of becoming three-dimensional characters, they must defeat the land’s evil tyrant before becoming cliches themselves.

Title: THE STORY OF A STORY (THE UNTOLD STORY)

Curtain Times: Fridays and Saturdays at 9 pm; Sundays at 4 pm and Mondays at 7:30 pm

Peter Gwinn (Book & Lyrics) is one of the original writers for The Colbert Report, for which he won two Emmy Awards, and the Amazon original series Alpha House created by Garry Trudeau.  Peter is a founding member of Baby Wants Candy, a comedy troupe that creates fully improvised hour-long musicals, which was a New York Times Critic’s Pick and sold out multiple runs at the Edinburgh Fringe Festival. Counting the musicals he’s improvised with Baby Wants Candy, Peter has created over 800 musicals. If you only count the ones he’s written on a computer, this is his third, following Moulin Scrooge! (iO Theater, Chicago; WreckingBall Theater Lab, Denver) and Listen, Kid! (UCB Theater, NYC; iO Theater, Chicago). Peter also co-wrote Twist Your Dickens: The Second City’s Christmas Carol (Goodman Theater, Chicago; Center Theater Group, LA; Portland Center Theater, OR). He’s also an actor, improviser and stand-up comedian.

Jody Shelton (Music) began his career as musical director for the Second City National Touring Company, and performed with renowned musical improv ensemble Baby Wants Candy for fifteen years. In 2012, he co-wrote the parody 50 Shades! The Musical, which had an extended run at the Elektra Theatre in New York, and has been performed in South America, China, throughout Europe and on tour all over the U.S. 50 Shades! can currently be seen at Bally’s in Las Vegas. Jody has released three critically acclaimed albums as solo artist, and two more with his band, Daughter & Son. He is proud to be working with Underscore to present The Story of a Story (The Untold Story) to the world for the first time. Jody’s next project is a documentary series for television chronicling the artistic process of writing and rehearsing a new musical.

Christopher Pazdernik (Director/Choreographer) A producer, director and choreographer with “a near encyclopedic knowledge of musicals” (NewCity Stage), Christopher is thrilled to be making his debut with Underscore on his most favorite of projects: a brand new musical! His Chicago credits include Bloody Bloody Andrew Jackson, Joseph…Dreamcoat and Bombs Away! (Bailiwick Chicago); Spamalot, A Streetcar Named Desire and Evita (Jedlicka Performing Arts Center); Miracle on 34th Street, Anyone Can Whistle and City of Angels (Porchlight Music Theatre); Time After Time: The Songs of Jule Styne (Theo Ubique); The Full Monty (Village Players), Bette, Live at the Contintental Baths (Hell in a Handbag) and a Jeff Award nomination for co-choreographing Spamalot with Nightblue Performing Arts. He has also worked with new musicals in development Far From Freud (Village Players), Perpetual Possibility (Kokandy Productions) and Bewildered (Hell in a Handbag). Producing credits include a series of musical theater revues at Davenport’s, which he also hosts; Associate Producer for Violet (Bailiwick Chicago); and Company Manager for the Chicago Premiere of First Date (Chicago Commercial Collective). Christopher is also the creator and co-host of Option Up!, a live monthly musical theater talk-show at Stage 773. As an instructor, he has taught at The School at Porchlight, where he is an Artistic Associate, and Elmhurst College, his alma mater.

David Kornfeld (Music Director, Orchestrator) is a co-founder of Underscore Theatre, and serves on its board and on staff as Producing Artistic Director and Resident Music Director. As a keyboardist, he performs actively with numerous ensembles, from the Hip Young Gunslingers Big Band to his organ quartet Jazzsquatch and funk band, Red Gorgeous. His musicals have been performed throughout the Midwest, and his incidental music, song settings and arrangements have been commissioned by theatres nationwide, garnering such awards as the Sigrid and Erling Larsen Award in Creative and Performing Arts, finalist in the 2011 ASCAP Young Jazz Composer Awards competition and a Kennedy Center commendation for Achievement in Music Composition in the 2012 American College Theatre Festival. David’s theatrical collaborations range from large theatres to sketch comedy groups, and everything in between, including Loyola University Chicago, Playhouse on the Square (Memphis, TN), Open Door Repertory Theatre, The Public House Theatre, Theatre-Hikes, Hey Ladies, Ex-Pats Theatre Company, Whiskey Wry Productions, Summer Place Theatre, The Cabaret Project and Li’l Buds Theatre Company. www.davidkornfeld.com

Founded in 2011, Underscore Theatre Company is a team of producing artists dedicated to exploring stories of power and resonance through a musical lens; fostering the development of new musicals; and bolstering Chicago’s role as a national leader in musical theatre. Since its creation, Underscore has produced 14 world-premiere musicals in Chicago. Underscore is proud to be Chicago’s home for new musicals.