Goodman Theatre proudly announces that two of its productions will have a life beyond US borders in 2014.
Pedro Páramo, a collaboration with Cuba’s Teatro Buendía that premiered at the Goodman in 2013, is one of three major
Latin American works invited to perform at the 9th biennial Encuentro Festival (June 21-28)—a celebration and symposium on performance throughout the Americas, held this year in Montréal, Québec. In addition, Tony Award-winning director Mary Zimmerman’s production of The White Snake (on stage through Sunday, June 8 at the Goodman) will appear in China as part of the 2nd annual Wuzhen Theatre Festival (November 7-9), a mix of international and Chinese theater in the ancient water town of Wuzhen, near Shanghai.

“The Goodman continues to make international contributions as it participates in festivals in Canada and China this year,” said Chicago Mayor Rahm Emanuel. “Congratulations to all involved with Pedro Páramo and The White Snake. Chicago is a cultural capital, and now the world will enjoy the rich and vibrant talent from our very own Goodman Theatre.” 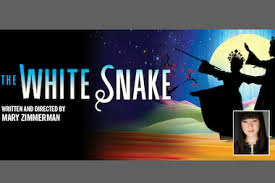 Said Goodman Artistic Director Robert Falls,“We are proud and excited to introduce international audiences to Mary
Zimmerman and Henry Godinez, two artists of our distinguished Artistic Collective, through these important productions. Both of these works are rooted in two of the most significant stories in their respective cultures, and each bears the unique aesthetic of its creator. It’s extremely special to be invited to participate in these prestigious world festivals.”

Manilow Resident Director Mary Zimmerman’s “unique theatrical language is more powerful than ever” (Chicago Reader) in The White Snake, commissioned by the Oregon Shakespeare Festival, where it premiered in February 2012 followed by runs at Berkeley Repertory (November 2012), McCarter Theatre Center, NJ (October 2013) and the Goodman (May/June 2014). Stan Lai, Artistic Director of the Wuzhen Theatre Festival, commented, “We greatly anticipate the performances of the Goodman Theatre’s The White Snake, written and directed by the eminent US director Mary Zimmerman, at the Wuzhen Theatre. Already the production is gathering interest in China as an American take on a timeless Chinese folk tale that coincidentally comes from the Wuzhen area. As the closing performance of this year’s Festival, The White Snake will form a fascinating bookend to Tian Qinxing’s Green Snake, a play based on the same folklore, which will open the Festival. We are excited at this collaboration, and give thanks to the Goodman, which has been such a wonderful collaborator, for this opportunity to bring such a major work of the American theater to China. We also thank Bill Rauch of the Oregon Shakespeare Festival, where The White Snake originated, for originating the possibilities of the collaboration. We look forward to a rich and multi-leveled cross-cultural experience in Wuzhen this fall.”  Added Mary Zimmerman, “It is a great honor and a personal dream to have our version of this time-honored tale embraced by the artists and producers of the Wuzhen Festival. The White Snake is a dreamy story of union and reunion, and it seems fitting that we will now all join hands together in China, across so much time and distance, and across barriers of language and sometimes politics, to retell this tale of a universal longing towards boundless love.”

“We’re thrilled to reunite with our Teatro Buendía colleagues and to continue to develop this groundbreaking production at the Hemispheric Institute’s Encuentro Festival, which investigates and celebrates performance practices throughout the Western Hemisphere,” said Godinez. “The ‘Hemi’s’ inclusion of Teatro Buendía of Cuba/Goodman Theatre’s co-production of Pedro Páramo demonstrates the significance of this international collaboration, and illustrates the potential of cultural exchange as a catalyst for change.”

Pedro Páramo follows a son who returns home to meet his father and reveals how one man’s unchecked appetite destroys
both everything he loves and the town that made him great. Pedro Páramo was co-commissioned by the Museum of
Contemporary Art Chicago and Goodman Theatre and developed in association with Northwestern University’s Theatre and Interpretation Center. The collaborative process began in February 2012 with a workshop in Cuba with Teatro Buendía; later that spring, the text was further workshopped with the playwright and directors at Northwestern, followed by a presentation at the MCA. Godinez’s December 2012 trip to Cuba was sponsored by a MacArthur Grant given to the MCA, which allowed professional American and Cuban actors to work towards a major American regional theater premiere for the first time. Development of Pedro Páramo was supported in part by the International Connections Fund of the John D. and Catherine T. MacArthur Foundation, and the Performing Americas Program of the National Performance Network.

With “puppets, singing, live music, elaborate choreography…even the darkest evil is brightly beautiful in The White Snake” (New York Times). Zimmerman’s adaptation of this 2,000-year-old Chinese fable is a charming tale of girl-meets-boy and falls head-over-heels in love. The trouble is, the girl is a white serpent from the spirit world who must join the human world in order to attain her heart’s desire—a sincere and simple young man. A vengeful monk, appalled by what he perceives as an immoral relationship, then intends to thwart her pursuit. Can love prevail? The Chicago premiere of The White Snake was critically praised as “wondrous magic—highly recommended!” (Chicago Sun-Times), “moving and engaging” (Time Out Chicago) and “a must-see love story, startlingly funny and hypnotically beautiful” (Chicago Parent). The White Snake runs through June 8 in the Albert Theatre. Tickets for the final week of the run ($25 – $40, valid for “A” and “B” seating zones only, not valid through Goodman’s mobile site, on previously purchased tickets or in combination with other offers) can be purchased by telephone at 312.443.3800, at GoodmanTheatre.org/WhiteSnake or at the box office (170 North Dearborn).

The Goodman is grateful for the support of Fifth Third Bank and Illinois Tool Works, the Corporate Sponsor Partners, and of WBEZ 91.5, the Media Partner, for The White Snake.

“We’re thrilled to reunite with our Teatro Buendía colleagues and to continue to develop this groundbreaking production at the Hemispheric Institute’s Encuentro Festival, which investigates and celebrates performance practices throughout the Western Hemisphere,” said Godinez. “The ‘Hemi’s’ inclusion of Teatro Buendía of Cuba/Goodman Theatre’s co-production of Pedro Páramo demonstrates the significance of this international collaboration, and illustrates the potential of cultural exchange as a catalyst for change.”

The Goodman’s 2013/2014 Season features nine productions on its two stages—six in the 856-seat Albert Theatre and
three in the 400-seat flexible Owen Theatre, plus the annual New Stages Festival that includes additional workshop
productions. On stage now is the Chicago premiere of The White Snake written and directed by Mary Zimmerman (through June 8, in the Albert) and the world-premiere Goodman commission Ask Aunt Susan by Seth Bockley, directed by Henry Wishcamper (through June 22, in the Owen). Completely the 2013/2014 is Rachel Rockwell’s major revival of Brigadoon by Alan Jay Lerner and Frederick Loewe (June 27 – August 3, in the Albert).  For more information visit www.GoodmanTheatre.org