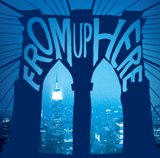 The Towle Theater continues its season of premieres with the US premiere of Aaron Lee Lambert’s From Up Here.  This musical is under the direction of Sherry Sweeney. Sherry has been seen onstage at the Towle Theater in the smash hit Jewtopia and No Way to Treat a Lady and she directed Pursued by Happiness last season.  Musical Direction is by Elizabeth Tuazon.

From Up Here started life in February 2009 at the Royal Scottish Academy of Music and Drama (now the Royal Scottish Conservatoire), when eight MA Musical Theatre students were put in a room for a week and told to ‘write something’. On the final day, twenty minutes of original material was presented to an invited audience.  Aaron Lee Lambert took over as sole writer of From Up Here and worked with Perfect Pitch over the past several years to complete the piece. The world premiere of From Up Here was at the Wilde Theatre in June 2012.

The story centers around five strangers who find solace on the Brooklyn Bridge, suspended between who they were and what they might become. From Up Here explores time, change and the choices that shape the lives of five very different people whose paths cross in the most unlikely of ways. From Up Here asks the question: what makes life worth living?

Performances for From Up Here are July 11-13, 18-20 & 24-27. Thursday through Saturday the production will begin at8pm and on Sundays at 2pm. Tickets are only $17. Every Friday performance is an Educator Appreciation Night with buy-one-get-one free tickets to all educators with a school ID. Thursday, July 24th is Industry Night; anyone who provides proof of their work in a theater production will receive a buy-one-get-one free ticket.  Reservations required for all promotional discounts. Children under six years of age are not permitted in the theater.

The Towle Theater is located in historic downtown Hammond at 5205 Hohman Avenue. Free, well-lit, secured parking is available off of Fayette Street only steps away from our back entrance or in the parking lot directly across the street from the theater on Hohman Avenue. For more information on purchasing tickets, visit www.towletheater.org or call the box office at 219-937-8780.