LAURA BENANTI TO FOLLOW NEW LIVE CD “IN CONSTANT SEARCH OF THE RIGHT KIND OF ATTENTION” WITH APPEARANCES IN “THE SOUND OF MUSIC” ON NBC-TV, “THE MOST HAPPY FELLA” AT CITY CENTER ENCORES! AND A SPECIAL COMEDY VIDEO SERIES ON THEATERMANIA.COM 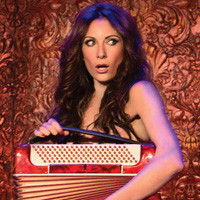 LAURA BENANTI  the Tony Award winning actress and singer, also known for her TV roles on “Go On,” “The Playboy Club” and “Law & Order: SVU” – will follow the recent release of her debut album, In Constant Search of the Right Kind of Attention with a slate of projects through the next year.

Laura will star opposite Carrie Underwood in NBC-TV’s live national broadcast of The Sound of Music on December 5, as well as the April 2014 City Center Encores! production of the classic Frank Loesser musical The Most Happy Fella. She also has a recurring role on the upcoming 6th season of the Showtime TV hit “Nurse Jackie.” Laura stars in the improvised, free-form comedic video series “Laura Benanti Explains…” forTheaterMania.com. The premiere set of Shakespeare-inspired videos was introduced this month with additional installments set to arrive later this season. Next season, she will appear in concert with the Gay Men’s Chorus of Washington DC at the Kennedy Center (May 18, 2014) and the San Francisco Gay Men’s Chorus (June 25-27, 2014).

In Constant Search of the Right Kind of Attention – recorded live in concert at the New York nightclub 54 Below and released by Broadway Records – features not only her favorite theater numbers, new versions of contemporary hits and original songs, but also personal anecdotes and revealing stories about her life and career. The CD was recently a USA Today Playlist “Pick of the Week.”

When the concert evening first opened in New York, Laura was praised for her “funny zingers,” “hilarious mugging” and “bright, full soprano” by The New York Times and her “pristine vocals” from the New York Daily News. Upon its debut in the nation’s capital, her show was hailed as “a smart, funny, tuneful evening” by The Washington Post. Laura’s own compositions – such as “The Ukulele Song,” on which she accompanies herself on the titular instrument – showcase her humor, musicianship and deft songwriting skills. A haunting medley of Ellie Goulding’s “Starry Eyed” and Lana Del Ray’s “Video Games,” called “sultry” and “infectious catchy” by the New York Daily News, brings out subtle new colors in her voice. She reprises songs from two of her most celebrated Broadway roles: the sensuous “Unusual Way” from Nine and the zany “Model Behavior” from her show-stopping Tony Award nominated turn in Women on the Verge of a Nervous Breakdown. In addition, Laura highlights a trio of new selections from an upcoming musical fromTodd Almond, also the album’s Music Director and arranger.

The album – available on iTunes, Amazon and anyplace music is sold – was produced by Aaron Ankrum and features Todd Almond on piano, vocals and accordion; Brian Ellingsen on bass, Ann Klein on acoustic and electric guitars, banjo and mandolin; and Rich Mercurio on drums.

Ms. Benanti earned the 2008 Tony, Drama Desk and Outer Critics Circle Awards for her revelatory portrayal of Gypsy Rose Lee in Gypsy opposite Patti LuPone and directed by Arthur Laurents. Her other Broadway roles include her Tony, Drama Desk and Outer Critics Circle Award nominated performance of Cinderella in Stephen Sondheim’s Into the Woods and her Tony nominated turn in Swing! She also starred opposite Antonio Banderas as his muse in the celebrated revival of Nine. Benanti began her multifaceted career as Maria in The Sound of Music opposite Richard Chamberlain.

Other distinguished theater performances include Perdita in The Winter’s Tale at the Williamstown Theatre Festival opposite Kate Burton, Anne in A Little Night Music at the LA Opera opposite Victor Garber, and Eileen in City Center Encores! Wonderful Town opposite Donna Murphy.

Ms. Benanti recently wrapped production on the NBC sitcom “Go On” in which she starred opposite Matthew Perry. Recently she starred in the NBC series “The Playboy Club.” Other television roles include co-starring on “Starved,” recurring roles on “Royal Pains,” “The Big C,” “Law & Order: SVU,”and “Eli Stone,” as well as guest starring on “Elementary” and “Life On Mars” and an appearance celebrating Jerry Herman at the Kennedy Center Honors. Benanti can be seen in the films Take the Lead and Meskada.

4. On The Street Where I Lived (Frederick Loewe and Alan Jay Lerner)

8. He Comes for Conversation (Joni Mitchell)

13. “My favorite thing that ever happened to me”