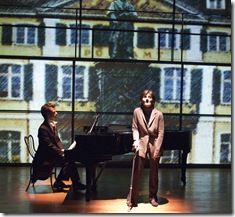 A child asks, “Mom, does God sing songs?” “Why do you ask?” the mother replies. “Because when you listen to music Mom, you look like your talking with God.“

The unexpected variation on life can be magical. Taking something basic then augmenting it where it becomes reborn is akin to a spiritual awakening. Pondering why Beethoven took what most would consider a mediocre waltz and spent the last years of his life obsessed with a commissioned assignment in making variations on that theme is, by itself, an intriguing storyline for a play. Add to that a current day Beethoven scholar who tries to find her own redemption in those same variations and you have the workings of a modern day masterpiece. That is just the case with Timeline Theater’s Chicago premiere of Moises Kaufman’s 33 Variations, which was initially produced at the Arena Stage, then moved to Broadway with Jane Fonda making her first return to the New York stage in over 40 years. Under the direction of Nick Bowling, Timeline’s version is far superior to the Broadway outing in every way and, moreover, this is arguably the best production ever staged by Timeline.

In 33 Variations, Mr. Kaufman takes two different centuries and weaves them together to ultimately prove how unchanged the human condition has remained, how intertwined we all are and how the friendship of others make us whole.

The play opens with Dr. Katherine Brandt and her daughter coping with the beginning of the end, which is the case of all ALS diagnoses. Dr. Brandt’s final paper is to do delve into the psyche of Beethoven and the purpose behind his variations. To this end, she journeys to Bon, Germany where she is granted access to his archives. Counterpoint to this, we see Beethoven’s loyal servant, via an order by the master himself, accept Diabelli’s challenge to write variations on his waltz. This is also the beginning of the end for Ludwig, as his health is rapidly declining and his deafness has almost taken complete hold. Kaufman’s story moves seamlessly between these two worlds and creates the counterpoint for an emotional powerhouse of an evening.

Mr. Bowling has impeccably cast 33 Variations. Janet Ulrich Brooks gives the best performance of her remarkable career. Her portrayal of Dr. Brandt is a master class in character development. Even though we don’t know much about her, we instantly know everything we need to by the way she speaks, moves and interacts with the other characters. As her daughter Clara, Jessie Fisher matches Ms. Brooks’ competence at every level. Never once do you ever doubt the truth behind this mother/daughter relationship. By the time the final scene comes and the emotional dam is burst, I defy anyone not to think of the love they have or had about their own mom and not leave the theatre in tears. 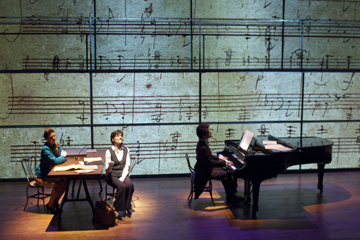 Ian Paul Custer’s nurse turned caregiver to both Clara and her mom, gives the needed levity and has great onstage chemistry with Ms. Fisher. Juliet Hart gives an integral and measured performance as Dr. Ladenburger, who finds a true friend in the dying doctor whom activates all the buried emotions she hid away when she cared for her own family member with ALS.

Marching backwards on the timeline continuum iis Matthew Krause, who as Beethoven’s keeper, Anton Schindler, steals most every scene he is in. Not because he upstages anyone, but again, because his character study is so real. Schindler has such deep love for his friend and understands that these are his final years. Like Dr. Brandt’s daughter, Schindler does what is needed for Beethoven’s care, no matter what the consequences are on their own lives. Michael Kingston is also at the top of his game as the man whom launches this whole musical game, Anton Diabelli. As Ludwig van Beethoven, Terry Hamilton knocks his portrayal out of the park and gives quite a glimpse into the maddening mind of a genius. 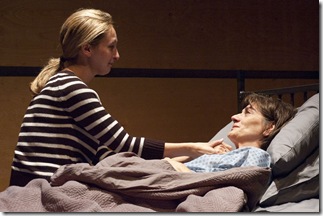 The entire evening is underscored by the amazing George Lepauw, who takes center stage with a Steinway, effortlessly going through the Variations, to wit the action moves at an almost choreographed pace around the instrument. (This was done off to the side of the stage on Broadway).

What really separates this production from any other staging is Brian Sidney Bembridge’s scenic design whose elegant and resourceful two tiered set allows the most breathtaking projections which moves the story forward as much as any of the dialogue.

In the opening speech, the audience is told that that Timeline is using the space at Stage 773 because their subscriptions grew by 150% and needed the extra seating to accommodate the new patrons. With productions like this 33 Variatons, the History Boys, Enron, (the list is getting too long), Timeline will soon be needing a space equal to that of the Goodman and Steppenwolf. 33 Variations is a must see, not only for the perfection of the production but also for the amazing things it will do to lift your soul; another unexpected variation!

773.281.8463 For tickets, please visit www.timelinetheatre.com All photos by: Lara Goetsch