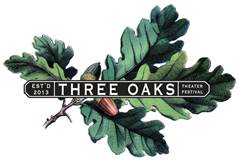 Note to press: Complicated is in development and is playing for the first time in a limited 2-show run. We respectfully requested that press refrain from reviewing the first look, workshop production.

A Workshop Production of a new musical

Conceived and directed by Brigid Murphy, music and lyrics by Frank Orrall and Poi Dog Pondering

as well as puppets by Chicago artist Cynthia VonOrthal

This workshop musical is currently in development.

About The Acorn Theater

Housed in a turn-of-the-century corset stay factory, The Acorn was purchased by two Chicago residents who lovingly restored the abandoned building.  The restoration was featured in multiple programs on HGTV.  In 2003, the building was re-opened as a 250-seat multi-disciplinary space used for professional performances and live theater.  The Acorn also houses a 1931 Barton theater pipe organ and boasts a huge acorn sculpture in front of the building.

Three Oaks, Michigan, located about 70 miles from Chicago, has 1,600 residents.  Approximately 25% of those residents name Three Oaks as their secondary resident, most of whom are from Chicago.  The Village, remarkably well-developed in the arts, boasts two theaters, the live-performance Acorn Theater and the Vickers Theater, which shows independent and foreign films.  The quaint downtown has four art galleries featuring the work of established and emerging artists.  Chamberlain Path, located steps from the main street, has been turned into a sculpture garden featuring monumental sculptures by local and national artists.  The town also hosts two annual art festivals; the Art Attack weekend and Art in the Park.  Meanwhile, Dewey Cannon Park is home to Music in the Park, a free concert series held every Saturday during the summer.  Perhaps most indicative of the town’s quirky, artistic spirit, Three Oaks is one of the few villages in the country with the official position of Village Poet Laureate.  Each year, the reigning Poet Laureate is asked to write a Flag Day poem and a winter poem as well as participate in readings throughout the year.  In 2013, Three Oaks Theater Festival was born.