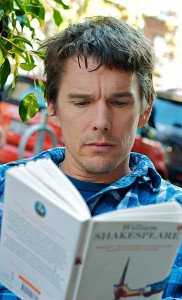 Produced by Richard Denton for Blakeway Productions & THIRTEEN for WNET in association with the BBC and Shakespeare’s Globe, each episode explores and reveals the extraordinary world and works of William Shakespeare and the still-potent impact they have today. The films combine interviews with actors, directors and scholars, along with visits to key locations, clips from some of the most-celebrated film and television adaptations, and illustrative excerpts from the plays staged specially for the series at Shakespeare’s Globe in London.

Behind every Shakespeare play there is a story: for instance, how he and his company dismantled their theater and rowed it across the river Thames when their landlord cancelled their lease – then staged Henry V for the first time. There are echoes of the playwright’s life — who named his twins Hamnet (a boy, who died at age 11) and Judith — in plays like Twelfth Night, where the plot turns on the adventures of separated twins; and Hamlet, where the drama begins with the grief of a son who has lost his father. The series shows Shakespeare as an impresario who, four centuries ago, defined early the tenets of show business – drawing on historical sources, stealing and adapting ideas, bringing back popular characters, writing prequels, and developing dramatic ideas from the politics of the day.

The six episodes will air as follows: 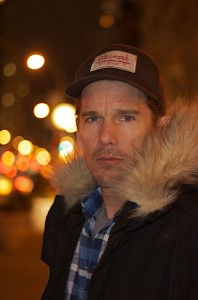 Ethan Hawke invites viewers on his quest to play Shakespeare’s murderous Thane of Cawdor by researching the true story and real-life events that served as the play’s inspiration. Historian Justin Champion visits the actual Scottish sites of the story on Hawke’s behalf, introducing him to Dunsinane where Macbeth supposedly lived, and to the history books that distorted the true story and consequently led Shakespeare to do the same. Immersing himself in some of the most memorable and innovative productions of “the Scottish Play,” Hawke gleans extraordinary insights into Shakespeare’s understanding of the criminal mind. Lady Macbeth’s relationship to the titular Thane is a critical role in the play and is examined by observing Shakespeare’s Globe actors rehearsing and performing scenes from the play, as well as by revisiting recent productions starring Patrick Stewart and Antony Sher.

Joely Richardson investigates (with her mother Vanessa Redgrave) the legacy of these two brilliant cross-dressing comedies, with their missing twins, mistaken identities, and characters in disguise; their connections to Shakespeare’s personal life; and the great romantic heroines created by Shakespeare in two perennially popular plays. Richardsoninvestigates the comic and dramatic potential of female roles written for male actors to play. At the same time, Richardson demonstrates that Shakespeare revealed an acute understanding and sympathy for women when he wrote these characters. Redgrave’s portrayal of Rosalind in As You Like It made her a star in England and soon after, all over the world, and the show reveals the legacy of strong, sassy, witty women that we inherit from William Shakespeare’s great comedies.

In returning to the role of a deposed monarch whose crown is taken from him, Derek Jacobi takes a 360-degree view of this great political thriller whose title character he played more than 30 years ago. Jacobi shares insights on the play’s political twists – and their modern equivalents – that have kept Richard II resonant for centuries through its understanding of power’s tendency to corrupt and distort the truth, and how quickly power may be lost. While coaching actors at Shakespeare’s Globe, Jacobi describes how the play was used by the Earl of Essex in his attempted coup against Queen Elizabeth I, and persuaded Shakespeare’s own company to stage it to encourage the Earl’s “plotters.” Jacobi reveals how the plot nearly cost Shakespeare his life. Also featured are notable excerpts from the upcoming Great Performances film adaptation starring Ben Whishaw andPatrick Stewart.

Jeremy Irons uncovers the enduring appeal of Shakespeare’s most iconic “history plays,” from the true English history embedded into the works to the father-son drama that Shakespeare created. In disclosing Shakespeare’s sources – and steps the playwright took to distort them –

Irons uncovers the historical truths behind the story and how they inspired some of Shakespeare’s most famous monologues. On a journey to the battlefield at Agincourt in Northern France, the climactic location of these plays, it’s revealed how the Bard was more subversive and less patriotic than his ardent admirers often think. Irons also invites viewers behind the scenes at the filming of key sequences in the new Great Performances adaptation starring Irons himself as the father-king, Henry IV, and Tom Hiddleston as his son, Prince Hal, who becomes Henry V.

An acclaimed Hamlet in the Royal Shakespeare Company’s hit production (also a recentGreat Performances production), David Tennant meets fellow actors who’ve tackled this most iconic of roles, including superstar Jude Law, and compares notes on the role’s titanic challenges. Tennant digs deep into the text about the doomed Danish Prince alongside the actors Simon Russell Beale and Ben Whishaw. With them he works to plumb the deeper meanings of the play and the reason it is widely considered the greatest of Shakespeare’s canon. The historical sources and religious wars, existential questions of the meaning of life and death, the idea that ghosts exist and may speak – all these and a searing personal drama, too – comprise this Everest of a play. Tennant also finds that many actors who have played Hamlet share an experience that is deeply and profoundly personal. This is also, perhaps, the reason audiences feel the play touches them more than any other before or since.

Trevor Nunn, the legendary director who has helmed 30 of Shakespeare’s 37 plays – and aims to complete them all before he retires – takes us through the magical and mysterious world created in the playwright’s last complete work. Nunn considers The Tempest as Shakespeare’s farewell from the stage, and explores the biographical nature of the play and its connection to the playwright’s often troubled family life. He also explores the stagecraft – the fact that Tempest is a play of special effects, apparitions and magic. Some of The Tempest’s most famous and most enthusiastic fans contribute their ideas about its lead role of Prospero, including Archbishop of Canterbury Dr. Rowan Williams, Academy Award-winner Helen Mirren and acclaimed film and theater director Julie Taymor, who recently directed a film adaptation that features Mirren in which the lead role was recast as a female named Prospera.

For 50 years, THIRTEEN has been making the most of the rich resources and passionate people of New York and the world, reaching millions with on-air and online programming that celebrates arts and culture, offers insightful commentary on the news of the day, explores the worlds of science and nature, and invites students of all ages to have fun while learning.

Shakespeare Uncovered is made possible by the National Endowment for the Humanities and the generous support of the project’s lead foundation sponsor, the Howard and Abby Milstein Foundation. Major funding is also provided by Rosalind P. Walter, The Polonsky Foundation, Virginia and Dana Randt, the LuEsther T. Mertz Charitable Trust, and PBS.

About WNET
In 2012, WNET is celebrating the 50th Anniversary of THIRTEEN, New York’s flagship public media provider. As the parent company of THIRTEEN and WLIW21 and operator of NJTV, WNET brings quality arts, education and public affairs programming to over 5 million viewers each week. WNET produces and presents such acclaimed PBS series as Nature, Great Performances, American Masters, Need to Know, Charlie Rose and a range of documentaries, children’s programs, and local news and cultural offerings available on air and online. Pioneers in educational programming, WNET has created such groundbreaking series as Get the Math, Oh Noah! andCyberchase and provides tools for educators that bring compelling content to life in the classroom and at home. WNET highlights the tri-state’s unique culture and diverse communities throughNYC-ARTS, Reel 13, NJ Today and MetroFocus, the multi-platform news magazine focusing on the New York region.