The No Exit Theater’s space is a perfect venue for Smokey Joe’s Café. This venue that is truly a jewel of Rogers Park, has created many Jeff award winning productions, which will undoubtedly earn many more in the future.   The theater’s intimate setting and cabaret seating transports you to Smokey Joe’s Café.  It brought to mind similar productions such as Pump Boys and Dinettes where the audience is a part of the show which experiences an engaging up close personal relationship with the cast which becomes part of the production. Throughout the show, the cast interacted with audience by flirting and dancing with them.  The audience loved it!  The singers made excellent use of the space which made this production visually attractive and made it work.

Smokey Joe’s Café is set during the happy times of the late 1960’s where bebop, syrupy love songs, and rock and roll were popular.  The story begins with a closed café, with one of the singers, (Vasily Daris) sorting through a box of memorabilia singing nostalgic rendition of “Neighborhood”.  The juke box is uncovered and old friends begin to appear and the audience travels back through time to experience the musical magic of Smokey Joe’s Café.

The cast of singers each had their own impeccable style and created an enjoyable visit to Smokey Joe’s  during its heyday.  I mentioned Vasily Daris who sang the opening number of the show.  Vasily’s   superb interpretation of “I Who Have Nothing” was very moving. It was the best song of the show! He sang Jailhouse Rock with the same sneer and sexiness of Elvis, and blended beautifully with the rest of the ensemble.  Robin Dasilva who sang “Saved” with the same spirit and passion of Aretha Franklin.  Robin’s “Fools Fall in Love” was sweet and fun.  Another dynamic voice of the evening was Sydney Charles who sang “Don Juan”.  The song is great and Sydney was fabulous.  The song is about the woman being a gold digger. My only disappointment was Sydney looked too sweet to be a gold digger and needed a few glitzy props or a costume to make the song believable. This was puzzling to me because there were props and costumes for most of the other songs. Sydney sang “I am a Woman” very convincingly, and she joined Steven Perkins on “You’re the Boss” where they shared great chemistry.  Which by the way, Steven’s visuals and animation were very entertaining throughout the show.  I really enjoyed watching Steven’s expressions to the various songs he was singing, especially during “Keep on Rolling”.

Britt-Marie Siversten did a saucy “Teach Me How to Shimmy” with a shimmery sexy dress. Britt made it a sexy fun number complete with a pole dance. Even though I am gay, this number made me a little hot. However, it probably was the dress as well as Britt.  Kasey Alfonso did a beautiful job singing “Pearl’s a Singer”. It is a great song for her and for her range and she sang it flawlessly, as she sang “Spanish Harlem”. Some of the rockier songs did not seem as easy for Kasey. None the less, she did well. Justin Adair and Jaymes Osborne did a rocky version of “Stay a While”.  Justin reminded me of young James Dean especially when he sang “Love Potion #9”. While both Justin and Jaymes sang well individually, they continued to blend well with the rest of the singers, particularly with the other men. TJ Crawford who went through the audience and sang “Charley Brown” encouraged audience participation. TJ made it fun for the entire audience.  Vasily, TJ, Jaymes, and Steven convincingly created the illusion of the famous 60’s quartets with great harmonies. The entire cast performed equally as well as a duo, trio or in a group, as they did for their solos. The journey ends with the stage emptying and the juke box is covered up.

The singers and the band under the musical direction of Jeremy Ramey were flawless.  There was a perfect balance of instruments where each singer could be heard without being overtaken by the accompaniment. I have been to many shows where this was not the case. The audience would have to literally strain to hear the singer or the words of the songs. I am happy to say that each singer sounded great without having to compete with the band, which made this show very enjoyable.   The musical ensemble which consisted of the piano magic of Jeremy Ramey, joined by bass guitar, saxophone, and drums were the perfect accompaniment for the singers. 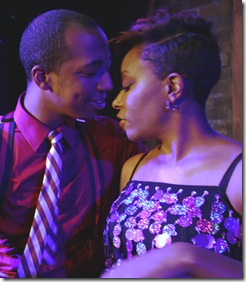 The direction and choreography under Brenda Didier along with Associate Director Steven Hiltebrand were excellent.  The pace of the show was great and never boring. Brenda and Steven made great use of the venue creating the intimate connection with the audience.

This show is highly recommended and is a must see. This production of Smokey Joe’s Café is a showcase for wonderful talent with excellent musicians and dancers, and a great theater. It is just a good time and a great visit down Memory Lane. Smokey Joe’s Café will run until November 11 at The No Exit Theater located in Rogers Park at 6970 Glenwood Avenue Chicago, IL 60626