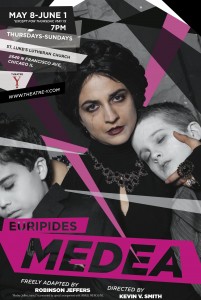 “This show marks my 11th collaboration with Melissa Lorraine,” says Kevin V. Smith, Theatre Y company member and Medea director “Medea allows audiences and artists alike to explore the dark side of human nature, our own inner workings. It’s my hope that doing this sort of work helps to put a little more empathy into the world while creating a bold piece of art at the same time.”

Medea’s crime is that she loves too deeply, and then allows her hate to grow as intense when she is forsaken. Scorned by her lover and killing her children, Medea is one of the most haunting characters in all of Greek mythology. Jeffers’ poetic adaptation fleshes out her thoughts for both their beauty and paradox. All of the texts previously produced by Theatre Y have been lesser- known works with this, Theatre Y consciously enters a new juncture to boldly reinterpret the known and the beloved.

The action of the play will contrast two different worlds: the world of Medea, an expressionistic nightmare vision of a couple going through a divorce, and the world of the Female Chorus, a contemporary dream world of girls preparing for prom. The style of the production is a hybrid of Viewpoints based abstract expressionist performance style with realism inlaid with Grotowski memory work.

“I have held Medea at arm’s length and perceived her as untouchable,” says Melissa Lorraine, Theatre Y Artistic Director and Medea cast member on the character of Medea. “This production is now my prayer on behalf of us all, who seem doomed to commit abhorrent acts despite our purest intentions, simply because we are fragile and love deeply.”

Opening performance May 7 at 7pm with additional performances May 8–June 1, 2014 on Thursdays through Sundays at 7pm, except Thursday, May 15, 2014.

All performances are at Theatre Y, 2649 N. Francisco Ave. in Chicago.Performance space is located inside St Luke’s Lutheran Church of Logan Square.