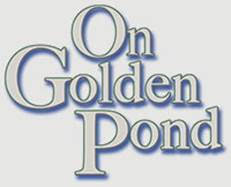 Considered one of the Midwest’s leading, professional equity theaters that presents both regional and world premieres featuring the area’s finest artists, Theatre at the Center kicks off its 25th Anniversary 2015 season with the beloved classic, Ernest Thompson’s ON GOLDEN POND. The touching, funny, and warmly insightful story, which went from a Tony Award-winning play on Broadway to an Oscar winning film starring Katharine Hepburn, Henry Fonda and Jane Fonda, runs February 26 through March 29, with a press opening on Sunday, March 1 at 1040 Ridge Road, Munster. The theater’s Artistic Director William Pullinsi directs ON GOLDEN POND, which stars Chicago veterans Dennis Kelly as “Norman” (Broadway: Damn Yankees; Annie, Get Your Gun; and Into the Woods; National Tours of Anything Goes and Jekyll & Hyde) and Ami Silvestre as “Ethel” (World Premiere of The Visit at The Goodman Theatre; Follies at Chicago Shakespeare Theater; La Cage aux Folles and A Little Night Music at Theatre at the Center). Adria Dawn plays “Chelsea” (Chicago Fire, Nip/Tuck, NCIS, Miracle on South Division Street at Theatre at the Center).

The classic tale celebrating the triumphs of life, love, and family follows the charming love story of Ethel and Norman Thayer, who are returning to their summer home on Golden Pond for the 48thyear. Norman, a retired professor, nearing eighty, with heart palpitations and a failing memory, is still as tart-tongued and wry as ever. Ethel, ten years younger and the perfect complement to Norman, delights in all the small things that have enriched and continue to enrich their long life together. Their vacation is interrupted, however, with the unexpected arrival of their divorced, middle-aged daughter and her dentist fiancé, who proceed to go off to Europe leaving his young son behind. Over the course of the summer, an unlikely friendship develops between Norman and the boy, forging new bonds across generations and celebrating the lessons they learn from one another.

Founded in 1991, the 400-seat Theatre at the Center is a year-round professional theater at its home, The Center for Visual and Performing Arts, 1040 Ridge Road, Munster, Indiana. Theatre at the Center is located off I-80/94, just 35 minutes from downtown Chicago, and has free parking. Performances are Wednesdays and Thursdays at 2 p.m.; Fridays and Saturdays at 8 p.m.; Sundays at2:30 p.m.; and select Thursday evening and Saturday matinees. Individual ticket prices range from $40 – $44. To purchase individual tickets call the Box Office at 219.836.3255 or Tickets.com at 800.511.1552. Group discounts are available for groups of 11 or more and gift certificates are also available. For more information on Theatre at the Center, visit TheatreAtTheCenter.com.