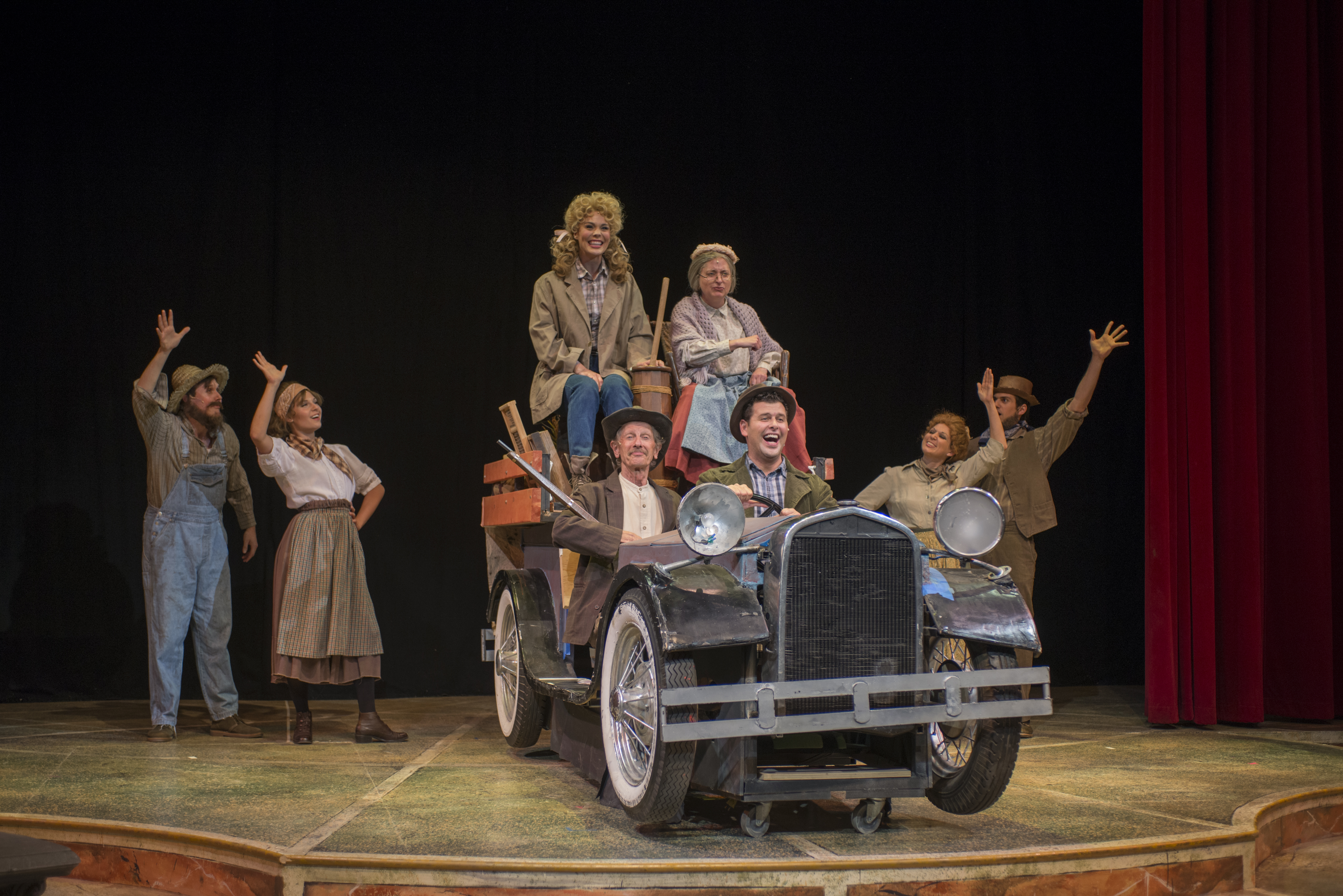 “Come and listen to a story about a man named Jed, a poor mountaineer barely kept his family fed…” is a phrase that has become indelible in our minds from one of the most well known and loved  ballads in pop culture.  To find someone who has never seen an episode of the Beverly Hillbillies is like finding someone who has never seen I Love Lucy since both shows have been in syndication since they were originally aired.

The premise of the TV series was outrageously funny with hillbillies from the Ozarks, striking it rich on oil, moving to the posh Beverly Hills of the 1960s.  Their out of place encounters and the genuine innocence they displayed fired much of the humor and situations.  It is largely a show about people trying to fit into a society that is completely at odds with who they are and the literal, unsophisticated misinterpretation of words and objects, ie, the cement pond (swimming pool), the fancy eattin table (the pool table) and the pot-passers (the pool cue sticks).  And then there are the culinary delights of Granny Clampett’s kitchen with every conceivable dish made from possum (one of the funniest moments in the show is at the beginning when Elly May brings on a dead possum she shot for dinner).

The Theatre at the Center in Indiana in many ways provides the perfect launching pad for the world premiere of Beverly Hillbillies – The Musical.  Much of the older, Midwestern audience related to and loved the show.  They caught the humor (you have to be blind, deaf and dumb not to) and left feeling entertained.  In their advertisement however, they talk potentially of Broadway.  That is overreaching given this show, its history, mostly self-conscious delivery and largely mediocre musical score.

Originally created by David Rogers forty years ago it has been produced by amateur theatre groups and high schools which is what I feel it is best suited for.  The musical score by Greg Opelka needs serious revision if they wish to continue their journey with Beverly Hillbillies to New York.  With the exception of the big dance number “Stampit Like a Clampett” and Granny’s soliloquy “My Little Ozark Home”much of the melodies fail to grab the audience and, although his lyrics are very clever and capture the humor of the series, the weak applause at the end of the majority of the songs should act as a barometer of what needs to be cut or replaced.

There is also an overall self-consciousness about the entire production that is counterproductive to the play-it-for-real, down to earth innocent style that makes it endearing and hysterically funny which the original cast (brilliantly selected and the reason for the huge success of the television series) mastered.  This must be played with all of the seriousness of Shakespeare’s Hamlet and not for laughs.

The Book by David and Amanda Rogers provides selections, characters, plots and classic lines from some of the more popular episodes.  Jed and his family are visited by Emaline Fetty (well played by Colette Todd) and her uncle Colonel Gaylord Foxhill (a spot-on impersonation by Bernie Yvon and one of the best in the show) who are both imposters intent on blackmailing the Clampetts.   Emaline has in her possession a camera rigged cuckoo clock which snaps sexually charged manipulated and staged scenes in the Cabana (pronounced Cab-a-na by the Clampetts) which they want to sell to Jed for five million dollars.  Mixed in with this we have the handsome Detective love interest for Ellie May, Lt. Frank Richards (the handsome and talented David Sajewich) and the Beverly Hills Fire Department (who make their daily calls every time Granny attempts to light a fire in the fancy stove).

Director David Perkovich has missed some very important details (and this is the key word) that establish the credibility, professional patina, and proper style for the show.  He has directed some of his actors to play the iconic roles dead serious while others play tongue in cheek.  Jim Harms’ almost spot-on portrayal of Buddy Epson’s Jed Clampett retains the spirit and earnestness of the original and he is at his best when playing it straight (there are instances where he slips into wink-wink-nudge-nudge self-consciousness of some of the others which kills the humor).  Kelly Ann Clark’s Granny Clampett provides just enough flavor of the phenomenal Irene Ryan who created the role and, like Ryan, plays it with the utmost earnestness and innocence.  Both of these veteran performers ground the show and are hugely entertaining.

John Stemberg tries his hardest (but misses) to capture the quality that Max Baer Jr. as the big, dumb Jethro (he does a great job with his “gazintas” which bring guffaws from the audience) but much is on the surface and manufactured instead of organic.  Although there is a resemblance to Max Baer Jr. he lacks the ingenuity and charm of the original. (Many may not know this trivia but the main characters of the Clampetts are based on Al Capp’s Lil Abner characters with Jethro as the gorgeous, boy man hunk with little brain matter).

Understudy Julie Baird has a striking resemblance to Donna Douglas’ Elly May Clampett and understands the style of the piece.  However she was flat on her opening number “What About Me” (one of the weakest in the show and needs serious rewriting) and given much of the dialogue about her busting out of her shirts, a little more assistance from costuming (not to in any way demean what lovely attributes Baird has) to give more of the overblown Daisy Mae figure.

Norm Boucher’s Milburn Drysdale possesses just the right comic touch. However his character is underwritten a tad and lacks range.

Tina Gluschenko’s Miss Hathaway was hugely disappointing.  I do not know why the director decided against giving her the distinctive high-pitched, east-coast finishing school voice and accent of the brilliant original Nancy Kulp, especially since she has become one of the most iconic and distinct of the Beverly Hillbillies cast.  Without the trademarks voice and delivery of Kulp Miss Hathaway loses any distinction and falls flat.

The remainder of the cast is uniformly strong and provides the perfect foils for the Clampett’s (Mary Nighosian as the east-coast snob Mrs. Pennyweather being particularly brilliant).

I applaud the Costume Design by Brenda Winstead who provides the perfect Hollywood look of the 1960’s in great detail and retains many of the iconic pieces from the series.  This is important in creating the world of the play.

Ann N. Davis’ set design is disappointing.  I am not sure if this is Petrovich’s choice or not but the set, like the performance styles, lack consistency and authenticity.  The iconic trademark Clampett truck seen in the opening every week looks like Norma Desmond’s Phaeton revamped.  While the Clampett mansion is appropriate in scale and appearance it lacks in detail.  The gold on the columns looks dry-brushed instead of being gold leafed which gives it a bad Las Vegas tackiness. The Louis XV furniture looks like poorly executed fakes and the tables look like props.  If you are establishing the reality of extreme wealth, social class and the iconic imagery we have come to expect from the series these are mandatory details that can make or break.

If Beverly Hillbillies – The Musical undergoes revisions (some major and others minor), more attention to capturing the exact look and details of the iconic television with accuracy series and playing it with the utmost unselfconsciousness the show may find its venues and audiences outside of amateur and high schools and move up into the major regional theatres throughout the country. But Broadway?  We will have to tune in next week to see.  It is still worth the drive out to Munster to enjoy an evening of entertainment and nostalgia.

Theatre at the Center, 1040 Ridge Road, Munster, Indiana, presents the World Premiere of THE BEVERLY HILLBILLIES, THE MUSICAL, running through August 10 Performances are Wednesdays and Thursdays at 2:00 p.m.; Fridays and Saturdays at 8:00 p.m.; Sundays at 2:30 p.m.; and select Thursday evening and Saturday matinees.  Individual ticket prices range from $40 – $44.  To purchase individual tickets call the Box Office at 219.836.3255 or Tickets.com at 800.511.1552.  Group discounts are available for groups of 11 or more and gift certificates are also available. Special Subscription Series Events include: the Wine & Theatre Series, the Dinner Theatre Series and the Opening Night Series.  For more information on Theatre at the Center, visit TheatreAtTheCenter.com.