42nd Street is a musical theatre dinosaur in almost every aspect. The big budget 1980 Broadway production, which was based on the 1933 film, marked the end of an era of the way Broadway shows were produced. The man behind 42nd Street was legendary producer David Merrick who had a pension for the opulent has evidenced by his long string of big budget shows including Hello, Dolly!, Oliver, Carnival and Gypsy.

Merrick was also quite narcissistic as it was at final curtain call on opening night at the Winter Garden Theater when he shocked the cast, crew and audience alike announcing that 42nd Street choreographer Gower Champion died a few hours before the curtain went up that day. Merrick knew how to manipulate the press and with that announcement, along with very strong reviews, 42nd Street became an instant success. That was until the British mega-musical began to infiltrate and 42nd Street and to vacate the theatre and make way for the singing kitties. (The musical moved to two other theaters finishing out its run). 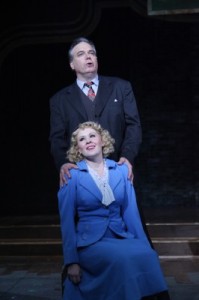 Theatre at the Center Artistic Director William Pullinsi’s current production may lack the opulence of the original (as well as the equally as good Broadway revival) but it does have the key ingredient to make any production of 42nd Street work and that is heart. 42nd Street is essentially a show within a show, chronicling the toils and tribulations of a troupe trying to get their show to Broadway. The cast is led by Larry Adams who gives a patriarchal spin to the show’s producer who has to tame a myriad of performers’ emotions and egos, no more so than that of diva Dorothy Brock deliciously played by Paula Scrofano. The true find of this production is Nicole Miller who gifts the stage with amazing presence and comic timing, akin to a young Debbie Reynolds.

42nd Street would be nothing without the dancing, and the young ensemble do not disappoint, hoofing Linda Fortunato’s fantastic choreography to great heights. William Underwood’s musical direction is also near flawless and the orchestra, though quite reduced, sounds better than any show in recent memory at that space.

42nd Street is a throwback piece of theatre that is sorely missed. There isn’t much of a plot, there is hardly any character development and the script is constructed in a schmaltzy manner. But, it all works and more than that, it works better than most new shows that try to be something they are not. 42nd Street is good old fashioned song and dance extravaganza and Theatre at the Center delivers with a lot of talent and a lot of heart.

42nd Street plays through October 21, 2012 at Theatre at the Center, 1040 Ridge Road, Munster, IN. For more information please visit www.theatreatthecenter.com or www.theatreinchicago.com