Theatre 167 Presents a World Premiere Production “The Church of Why Not” At The West End Theater in NYC: Performances Begin February 20 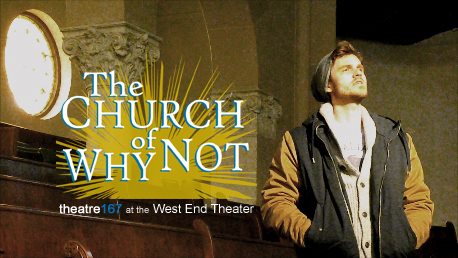 Theatre 167 will present the world premiere of The Church of Why Not, a new play inspired by the believers and skeptics, the Jews, Christians and Muslims, the activists and addicts, and the seekers and lost souls who pass through the doors of a church on the Upper West Side – staged at the very spot that inspired it.

Created through Theatre 167‘s deeply collaborative system of collective authorship, The Church of Why Not begins performances on February 20, 2015 at the West End Theater in the Church of St. Paul and St. Andrew.

As one of New York City’s most diverse and bustling destinations, The Church of St. Paul and St. Andrew brings together Christians, Jews, Muslims, atheists and more through a dynamic slate of programs and initiatives. In addition to the founding Methodist congregation, the church hosts the Jewish congregation B’nai Jeshurun, an Ethiopian Evangelical congregation, the Arab Youth Orchestra, LGBT Bapti-Metho-Costals, a homeless shelter, soup kitchen and the West Side Campaign Against Hunger. The Church of Why Not tells the story of this vibrant congregation and the people who pass through its doors.

Best known for creating and producing The Jackson Heights Trilogy, a six hour epic about the Queens, New York neighborhood told in 14 languages, Theatre 167 creates, cultivates and supports new work by artists of wide-ranging backgrounds and beliefs. Experimenting with form and process to create theatrical productions that celebrate a multitude of voices, the company develops and produces works that build bridges between and among the city’s most diverse communities.

The Church of Why Not is conceived and directed by Ari Laura Kreith and written by Camilo Andres Almonacid, Jenny Lyn Bader and J. Stephen Brantley. Bradley Wehrle (Gallery Players, Artistic New Directions) is the scenic designer. Jessa-Raye Court (Boomerang Theatre’s A Midsummer Night’s Dream, NYMF’s Barcode) is the costume designer. John Salutz is the lighting designer. Beth Lake (Freud’s Last Session, The Light in the Piazza) is the sound designer. The music director is Ben Morss (Sidewalks of New York).  Abbey Bay (The Assembly’s That Poor Dream), is the production stage manager. Bo Frazier (The Dinner Party, Haunting Julia) is the assistant director. Elizabeth A. Bell is the production manager. The costume/set assistant is Tut Herbet. Frankie Wong is the production intern. Public relations services are by John Capo Public Relations.

The cast of The Church of Why Not features Elizabeth A. Bell (Overdue, Oswald’s Backyard), J.Stephen Brantley, Brandi Bravo (I Like to Be Here, A Snowfall in Berlin), Mariana Cardenas (The Look in Her Eyes, Tell Like It Is), Erin Cherry, Nick Fehlinger (Jackson Heights 3am), Nathaniel Gotbaum, Daniel K. Isaac (Anna Nicole The Opera), Azhar Khan (HBO’s Veep, FX’s Damages, Sleepwalk With Me), Jon Krupp(Milk, Lost and Found), Elodie Morss (You are Now the Owner of This Suitcase), Emma Orelove (Our Town, Romeo and Juliet), Heather Lee Rogers (The Comedy of Errors), Derick Sherrier, Marshall Spann(The Jackson Heights Trilogy), Trevor St. John-Gilbert (Les Miserables, This Will All Be Yours), Millie Torchetti (Godspell, Smokey Joe’s Café) and Lisann Valentin (FX’s Rescue Me, I Like To Be Here).

The title of the play is inspired by a quote from Reverend K. Karpen, who spoke about how his Church has embraced such diverse communities so vigorously. “At other churches, they ask ‘Why?”, said Reverend Karpen. “Here we ask ‘Why not?'”

The Church of Why Not will be performed on Fridays at 8pm, Saturdays at 3pm and 8pm and Sundays at 7pm through March 15.

Tickets are available at www.theatre167.org.

The West End Theater in the Church of St. Paul and St. Andrew is located at 263 West 86th Street, half a block from the 86th Street stop on the 1 train.

Theatre 167 creates and stages plays that reflect the city around us. The first plays the company produced were inspired by a neighborhood in Queens where 167 languages are spoken by immigrants hailing from 100 nations.  Their productions reflect the same deeply diverse backgrounds that comprise their New York City audience.  A collaborative system of collective authorship allows for the inclusion ofmultiple voices in the creation of new work. Theatre 167 is a resident company of the West End Theater in the Church of St. Paul and St. Andrew.

“Pirira is marvelously constructed, with themes and emotions and pieces of dialogue from the two stories intertwining as they play out at the same time, only fully revealing their connections at the end. The play tackles prejudice, culture clashes and misguided good intentions while providing plenty of genuine humor throughout… Pirira makes a strong case for the most innovative and moving new shows coming from beyond the established haunts of Off-Broadway.” – Flavorpill

“A glorious mish-mash of cultures; a remarkably high-definition cross-section of one vibrant neighborhood (streets, homes, places of work) that feels like an intimate encounter… hilarious and poignant in equal measure… this play genuinely made me sort of fall back in love with the city.” – New York Magazine | Bedford + Bowery

“If you are asking yourself, ‘Where is someone like me in today’s theater?’ then take the time to (re)visit the Jackson Heights of I Like To Be Here. Whether Latino, Indian, gay, young, or other, you are represented. –Theatre Is Easy

“To tell stories about a place like Jackson Heights, one of the world’s most diverse neighborhoods, requires theater that’s as bold and rich as the community itself. Good thing there’s Theatre 167….” – amNewYork

Emotionally sensitive and sharply intelligent…The scenes are crystal clear and maintain an independent integrity even as they illuminate and comment on one another, creating a vast tapestry of the human experience.” – Theatermania

“A fascinating and genuine portrait of a part of New York that many have never seen but that all should know.” – Theatermania

Camilo Andres Almonacid In 2014 Mr. Almonacid received his MFA in Playwriting at Hunter College under the guidance of Tina Howe, Mark Bly and Arthur Kopit. During this time, he won the Irv Zarkower Award for his play Checkin’In and The Rita Goldberg Playwriting Award for his thesis play Westpine Myopes. In the summer of 2014, Camilo’s short play After The Crowds (part of the World’s Fair Play Festival at Queens Theater and produced by Theatre 167) was a New York Times Critics’ Pick.  He lives in New York City with his wife and is a teaching artist at East Brooklyn Community High School.

Jenny Lyn Bader’s plays include Mona Lisa Speaks (Core Ensemble), Manhattan Casanova (Hudson Stage; O’Neill Center’s Edith Oliver Award) and None of the Above (New Georges). One-acts include Miss America(“Best of Fringe” selection, NY Int’l Fringe), Worldness (Humana Festival), and History ofCommunication(World’s Fair Play Festival, Queens Theatre—NY Times Critics’ Pick). Ten of her short plays are published in Smith & Kraus’ Best 10-Minute Plays series. She co-founded Theatre 167, where she serves as Director of Artistic Development, co-authored The Jackson Heights Trilogy and I Like to Be Here, and co-producedPirira. Last season she received the Randall Wreghitt New Producer Endowment Award and was a featured playwright in NY Madness. A Harvard graduate, she belongs to the Dramatists Guild and LPTW.

J.Stephen Brantley has performed with Big Dance, CapsLock, Cucaracha, The Directors Co., and Jewish Plays Project, and at venues including 59E59, HERE, Queens Theatre, LaMaMa, Metropolitan Playhouse, P.S.122, Soho Rep, and Guild Hall. His plays include Blood Grass, Break, Chicken-Fried Ciccone, Eightythree Down, Furbelow, The Jamb, and Nevertheless. As a member of Theatre 167, Brantley co-wrote Jackson Heights 3am and I Like To Be Here. The company’s production of his Pirira, winner of the NYIT Award forOutstanding Premiere Production of a Play, was produced Off-Broadway in 2013. Brantley has been nominated for seven NYIT Awards and received the Micheál MacLiammóir Award for Best Actor at the 2013 Dublin Gay Theatre Festival. He is a member of the Indie Theatre Hall Of Fame.

Ari Laura Kreith is Artistic Director of Theatre 167, where she conceived and directed The Jackson Heights Trilogy—167 Tongues, You Are Now The Owner Of This Suitcase, and Jackson Heights 3am,—three full-length plays collaboratively written by 18 playwrights featuring 37 actors in 93 roles in 14 languages, as well as I Like To Be Here: Jackson Heights Revisited, or, This Is A Mango, which recently premiered at the New Ohio Theatre. Her recent production of Pirira, set simultaneously in Malawi and New York, received the 2014 NYIT Award for Outstanding Premiere Production Of A Play and transferred Off-Broadway to Manhattan’s West End Theatre, where Theatre 167 subsequently became a resident company. Inspired by the multiplicity of faiths, cultures and service organizations that share space in the historic building that houses the theatre, The Church of St. Paul and St. Andrew, Theatre 167 applied the collaborative approach it developed in Jackson Heights to this new community to create The Church Of Why Not.