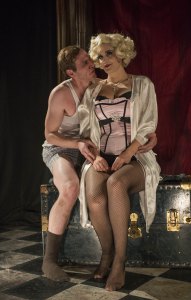 Bailiwick Chicago has launched its 2014-2015 season with the challenging and formidable The Wild Party by Michael John LaChiusa and George C. Wolfe. To tackle this beast they have engaged Jeff-Award winning director & choreographer Brenda Didier who has assembled a top-notch cast of triple threats; actors who are superb dancers and strong singers.

With shades of Kander & Ebb’s Chicago running throughout, the plot concerns Queenie, a vaudeville chorus girl who hosts a blowout party (a star-turn by Danni Smith) with her vicious lover Burrs, who performs as a blackface minstrel (a stellar, frenetic and frightening performance by the brilliant Matthew Keffer) in 1928 Manhattan. The guests are a sordid assortment of people who consist of Queenie’s rival, Kate (played by the Sharriese Hamilton in a captivating performance), a cocaine sniffing bisexual playboy Jackie (a top-notch portrayal by Ryan Lanning), a washed-up boxer, Eddie Mackrel, a black “Brother act” Phil and Oscar D’Armano (outstanding performances by Gilbert Domally and Desmond Gray respectively), a diva of indeterminate age and infinite life experience, reminiscent of a Bea Lilliesque Vera Charles in Mame, Dolores Brothers (in a magnificent tour de force performance) a young innocent girl whose dream is to be on Broadway, Nadine (a comic and delightful turn by Molly Coleman), a lesbian actress, Miss Madelaine True (Christina Hall) and her comatose girlfriend, Sally (a beautifully funny and tragic turn by Sasha Smith) and the bargain basement, drop-dead gorgeous heart thob Black (one of the strongest performances in the show by Patrick Falcon) who steals Queenie’s heart and forces an unpleasant climax when the party crashes into a brick wall.

As I watched this slick Broadway quality production and noticed how in-sync the actors were with one another and the hidden orchestra situated behind them which they could not see I was amazed. In lesser hands this could be a train wreck. This cast is such a strong ensemble who plays like “one” – a testament to the strong, masterful direction of Brenda Didier. Every aspect of this show shines with a beacon of love, comradery and artistic excellence. They give an electric performance that blows the roof off of the theatre and continues to elevate the new Bailiwick into a strong Chicago theatrical force.

The musical direction by Aaron Benham is superb and his full orchestra does not overpower the singers (quite a remarkable feat because the music is loud).

The ingenious scene design by Megan Truscott utilizes every square inch of the relatively small Richard Christiansen stage and provides three playing areas plus a vaudeville stage that forms two of the ceiling beams for the well-worn Manhattan apartment.

Brian Hoehne’s excellent lighting design provides the dark, murky atmosphere for this wild party and the period perfect costumes by Theresa Ham capture the decadence and dirt of the era.

Based on a 1928 poem by Joseph Moncure March, The Wild Party as a piece is not without its flaws. The music is so loud and large from the beginning that it leaves no room for the climax and its repetitive nature wears thin over time. The main catchy melody Queenie Wazza Blonde sounds very similar to a song that Ethel Merman made famous, Edie was a Lady. There is a beautiful ballad sung by Black and Queenie, People Like Us, that gives a respite from the banging music of the party and allows us a glimpse under the their hardened shells. That said LaChiusa’s score does capture the frenetic sound of the roaring 20s and provides a nightmarish landscape for the action of the story. I do think that a trim would do a great service to the score and build.

The actual plot itself is nothing new and how the characters are drawn makes it hard to like or even care what happens to them (through no fault of the actors who gives complete characterizations). One can see a heavy Brechtian quality that pulls you in and then throws you back out to remind you this is a play and that you should watch and learn and not necessarily feel.

For me this play was primarily about addiction and the victimization that accompanies it. The audience that would learn most from this show is the college-aged kids as many graduate with drug and alcohol dependencies.

Bailiwick choice of presenting such a timely piece is perfect, mirroring the out-of-control wild party that many people appear to be throwing in an attempt to escape the harsh inevitable reality of what is to come. So many people today choose to live in a vacuum and bury their heads in the sand.

Be warned that this show contains graphic sexuality and frontal female nudity.

The Wild Party runs through November 1, 2014, Thursday through Saturday evenings with Sunday matinees with an additional Tuesday, October 28th performance for industry. This is show that is not to be missed.