THE UNTOLD STORIES OF BROADWAY, VOL. 3 will benefit THE BROADWAY GREEN ALLIANCE, 11/15 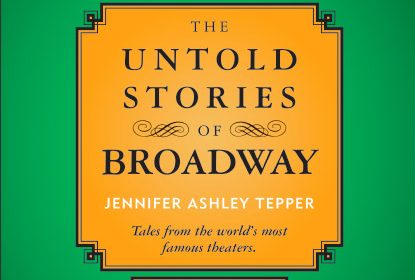 DRESS CIRCLE PUBLISHING has announced that their upcoming release THE UNTOLD STORIES OF BROADWAY, VOLUME 3, the latest in a series by acclaimed historian and producer JENNIFER ASHLEY TEPPER – will donate a portion of their proceeds to The Broadway Green Alliance. The book will be released on Tuesday, November 15 and is currently available to pre-order at dresscirclepublishing.com.

The Broadway Green Alliance (BGA) is an industry-wide initiative that educates, motivates, and inspires the entire theatre community and its patrons to implement environmentally friendlier practices. The BGA, launched in 2008 in collaboration with the Natural Resources Defense Council, is an ad hoc committee of the Broadway League and a fiscal program of Broadway Cares/Equity Fights AIDS. The BGA brings together all segments of the theatre community, including producers, theaters in New York and around the country, theatrical unions and their members, and related businesses. The BGA identifies and disseminates better practices for theatre professionals and reaches out to theatre fans throughout the country. For more information, visit www.broadwaygreen.com.

“We’re proud to be collaborating with The Broadway Green Alliance as the charitable partner for The Untold Stories of Broadway, Volume 3 in order to support their incredibly important work throughout the theatre community,” says Tepper. “For years, I have admired and been part of BGA’s efforts to make each theater greener. From recycling scenic pieces to utilizing eco-friendly cleaning supplies to encouragingbinder exchange rather than paper, there are so many ways that BGA shows us that we can continue to make shows happen while also taking better care of our planet.”

According to SusanSampliner, co-chair of The Broadway Green Alliance, “the BGA is thrilled to partner with Jennifer Tepper’s wonderful series Untold Stories of Broadway, which highlights the beautiful theaters of Broadway, and the generations of show people who have inhabited them. Our group has worked with the entire theatre community to move the needle, by making our shows more sustainable and our buildings more environmentally-friendly. The owners have led the charge in this endeavor, and we applaud Jennifer for giving their theaters the attention they so greatly deserve.”

THE UNTOLD STORIES OF BROADWAY is a multi-volume series that will examine the legendary Broadway theaters, both those that are still standing and those that are gone. Tepper, who is also a producer in her own right, interviewed over 250 theater professionals – actors, directors, producers, stagehands, designers, ushers, and others – to elicit their funniest and most compelling backstage experiences on the Great White Way.

Have you ever wanted to spend time with Stephen Sondheim in the lobby during one of his shows? Did you know that Patti LuPone once had a Broadway ghostly encounter? Have you wondered what it was like to be in the landmark Broadway premiere of Angels in America? From opening nights to closing nights. From secret passageways to ghostly encounters. From Broadway debuts to landmark productions. Score a front row seat to read hundreds of stories about the most important stages in the world, seen through the eyes of the producers, actors, stagehands, writers, musicians, company managers, dressers, designers, directors, ushers, and door men who bring The Great White Way to life each night. With THE UNTOLD STORIES OF BROADWAY, you’ll never look at Broadway the same way again.

This is the third book in a series that will tell the stories of all of the Broadway theaters. Volume 3 includes the Broadhurst, the Belasco,the Edison, the Lyric, the Majestic, the Schoenfeld, the St. James and the Walter Kerr: eight Broadway theaters that light up New York City.

The first two volumes have been lauded by the New York theater press. “I’m enjoying every chapter” said Michael Riedel in The New York Post. NBC New York named it among its “Must-Reads for any Broadway fan” and raved “the book is filled with juicy anecdotes and inspiring tales.” According to Broadway World, the books “are must-haves for anyone who loves the rich history of musical theatre. Each chapter bursts with information, nostalgia, and good old-fashioned cheesy Broadway love.”

JENNIFER ASHLEY TEPPER is the Director of Programming at Feinstein’s/ 54 Below, and the author of The Untold Stories of Broadway book series. As the leader of Feinstein’s/ 54 Below’s creative team, Tepper has curated or produced over 1500 shows, ranging from musicals in concert, to original solo acts, to theatrical reunions, to songwriter celebrations, and beyond. On Broadway, Tepper has worked on shows in directing, producing, and marketing capacities, including [title of show], The Performers, the 2011 revival of Godspell, and the 2013 revival of Macbeth. In addition, she is the co-creator of the Bistro Award-winning concert series, “If It Only Even Runs A Minute,” now in its 6th year. Tepper was recently named one of the 10 professionals on Backstage’s “1st Annual Broadway Future Power List.” According to the article, “Proving herself both a zeitgeist predictor and theatrical historian with her eclectic programming, Tepper is leading the conversation on contemporary musical theatre.” @jenashtep

BRISA TRINCHERO is a two-time Tony Award winning entertainment and tech entrepreneur. She built a multimillion-dollar Broadway investing portfolio which includes Hamilton, Beautiful: The Carole King Musical, Pippin, The Gershwin’s Porgy & Bess, and others. She is also the founder and CEO of ShooWin, an innovative tech platform giving real fans better access to the hottest events. A “Top 40 Under 40 Business Leader,” she is a frequent speaker and panelist at industry events focusing on the business of live entertainment. She has a degree in music and an MBA in finance. @brisatrinchero

ROBERTA PEREIRA is a Tony Award-nominated, Olivier Award-winning theater producer. She is currently the Producing Director of The Playwrights Realm, an Off-Broadway theater company devoted to supporting early career playwrights. Roberta has developed and produced plays, musicals, and event theatre on Broadway, Off-Broadway, regionally, in the West End, and on tour. Recently, she produced for The Realm Anna Ziegler’s A Delicate Ship (New York Times and Time Out New York “Critics’ Pick”) and Mfoniso Udofia’s Sojourners. Past select productions include: Tony-nominated play Mothers and Sons by Terrence McNally, starring Tyne Daly; the Olivier award-winning revival of Stephen Sondheim’s Merrily We Roll Along in the West End; and the Broadway premiere of Grace, starring Paul Rudd, Michael Shannon and Ed Asner. Roberta has been a speaker on the topic of producing and equity, diversity, and inclusion in the arts in multiple forums, like BroadwayCon, NYU/Tisch, Yale University, and Commercial Theatre Institute. Roberta is a graduate of Yale School of Drama’s Theater Management program and Wesleyan University. She is originally from Brazil and currently lives in New York City. @roberta_m_p