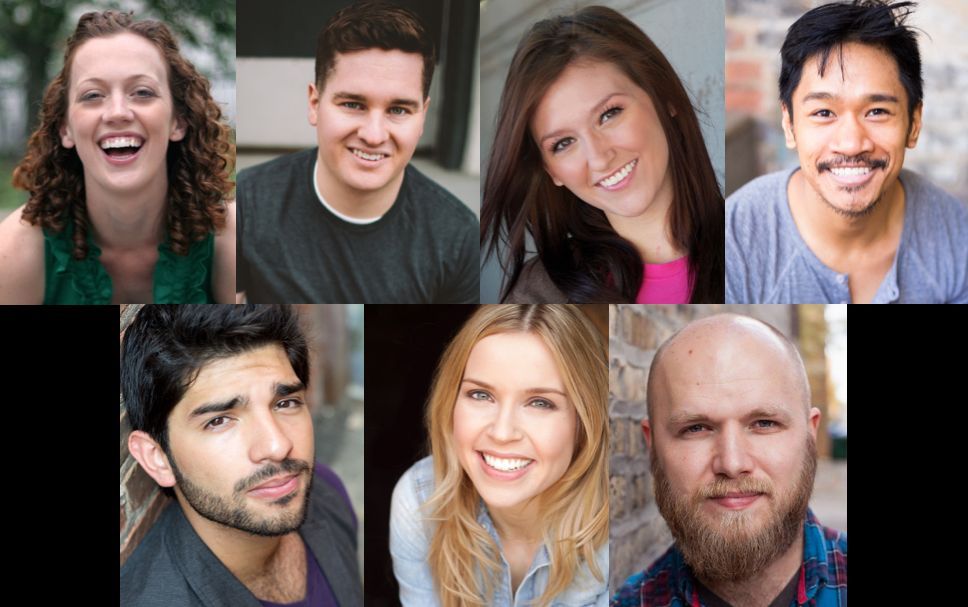 The Ruckus continues its 2014-15 season with the Midwest premiere of BARBECUE APOCALYPSE, Matt Lyle’s acclaimed comedy about adulthood, insecurity, and the transformative possibilities of total disaster. The Thomas Murray-directed production of the play called “a show I enjoyed so much … that I actually paid to see it again” (Lindsey Wilson, American Theatre) will run February 15 – March 15, 2015 at the Athenaeum Theatre (2936 N Southport Ave.) in Chicago. Tickets are available at AthenaeumTheatre.org, by calling 773-935-6875, or in person at the Athenaeum Theatre box office. A limited number of tickets are also available through Chicago Theatre Week, which runs from February 12 – 22. Press performances will take place on Sunday, February 15 at 4 p.m., and Monday, February 16 at 8 p.m.

The yard is wrong. The fence is wrong. The patio furniture is really, really wrong. As Mike and Deb prepare for a backyard barbecue designed to impress their more stylish friends, these concerns threaten to send them into a spiral of shame and self-doubt. But the world is about to fall apart, and apocalypse has a way of putting things in perspective. The Ruckus presents the Midwest premiere of a devilish new comedy from the writer behind The Boxer and the City Life Supplement. Best Play of 2014  – Dallas Observer; Best New Play 2014 – DFW Theater Critics Forum; nominee, American Theater Critics Association/Steinberg New Play Award.

“I’m incredibly excited for The Ruckus to be introducing Chicago to this thoughtful, explosive comedy, which has so much to say about where we place value and how we calculate success,” said The Ruckus Artistic Director Derek Van Barham. “Matt Lyle’s relentlessly funny, surprising script doesn’t skimp on the entertainment, to be sure, but it’s also an insightful look at how we relate with, compare ourselves to, and ultimately depend on each other.”

About the Playwright and Director

Originally from East Texas, Matt Lyle is a Summa Cum Laude graduate and winner of the Outstanding Theatre Graduate Award from Stephen F. Austin State University School of Theatre. He co-founded Bootstraps Comedy Theater in Dallas, Texas, for which he continues to serve as Artistic Director. In 2007, the Dallas Observer named Bootstraps as Best Small Theater Company and Matt as Best New Playwright. Matt is a member of the Dramatists Guild, and his plays have been produced in Dallas, Chicago, New York, Orlando, and the University of Michigan. His play The Better Doctor premiered in Chicago in 2010 and was named by NPR as one of the “Top Five Most Overlooked Shows”, which was, presumably, a compliment.

Thomas Murray is grateful to be working with the fine folks of The Ruckus. He serves as artistic director of Waltzing Mechanics, Chicago’s stage for documentary theatre, where he has directed Line One, The Body Image Project, Over My Dead Body, and five editions of EL Stories (Best of the Fringe, Chicago Tribune). Additional directing credits include Salt of the Earth (Ka-Tet), Marred (The Arc), Living Quarters (Strangeloop), The Wall-Reader (City Lit) and work with Prologue, Hobo Junction, Broken Nose, Rivendell, Next, Seanachaí, The Gift, A Red Orchid, and Steppenwolf. Thomas holds a B.A. in theatre production from Ball State University. He is a member of the Lincoln Center Theater Directors Lab, a graduate of Steppenwolf Theatre Company’s artistic apprenticeship, and a recipient of the Outstanding Young Alumnus Award from Ball State University.

The Ruckus is proud to participate in Chicago Theatre Week, which celebrates the rich tradition of theatre-going in Chicago. Returning for the third year, Chicago Theatre Week 2015 will be held February 12-22 and will include specially-priced tickets to 100 shows. Visitors and residents will again have the opportunity to sample the extraordinary range of theatrical offerings throughout Chicagoland. The Theatre Week ticket offers will be listed on a centralized website – www.ChicagoTheatreWeek.com – starting January 6, 2015. Chicago Theatre Week is presented by the League of Chicago Theatres and sponsored by Choose Chicago, Exelon, Dana Hotel and Spa, and ACME Hotel Company.

About The Ruckus Theater

Founded on the principle that the best art comes from fearless collaborations, The Ruckus is composed of multi-disciplinary artists from across the country and around the globe. We aim to create a company without borders—a theater that blends the lines between playwright and actor, audience and ensemble member. The Ruckus Theater is led by Artistic Director Derek Van Barham, Executive Director Catherine Bullard, Associate Artistic Director Stevie Chaddock, and a company and ensemble of twenty-seven.

The Ruckus, a Chicago-based 501(c)(3) organization, is supported by the Gaylord and Dorothy Donnelly Foundation, the Richard H. Driehaus Foundation, our generous individual donors and the Illinois Arts Council, a state agency.