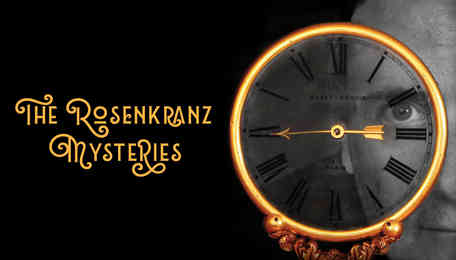 Classic as well as never been seen before illusions take over the Royal George Cabaret space this winter as the nationally regarded illusionist Ricardo Rosenkranz stars in The Rosenkranz Mysteries, an evening of magic to lift the spirits. Truly astounding numbers will captivate audiences in an intimate, true cabaret style setting with tables featured in the space. A leading local mixologist will enhance the atmosphere by creating several themed drinks that will help create a fully immersive experience for theatregoers.

Every illusion has been researched, evaluated, and workshopped with the nation’s most elite and respected magicians including Eugene Burger (Chief Architect of Magic for the production) whose credits include The Art of Magic on PBS and Mysteries of Magic on The Learning Channel; Jeff McBridge (Chief Magic Consultant) whose credits include being designated as Grand Prix of Magic winner in Monte Carlo; Ross Johnson and Johnny Thompson (Magic Consultants), and Jan Rose and Jordan Wright (Magic Assistants).

Dr. Ricardo Rosenkranz is a respected professor at the Northwestern University Feinberg School of Medicine.  He has been fascinated by magic since a young age and has long been incorporating his illusions into his teaching as a way to help engage students and encourage participation. After winning several teaching awards and traveling the country to deliver seminars, Rosenkranz decided to bring his act to the stage.

“There is something beautiful and wonderful about the unknown, and I think in that sense, magic and medicine share a DNA,” said Rosenkranz. “I am committed to creating a unique experience that energizes and uplifts every audience.”

The Rosenkranz Mysteries stars Ricardo Rosenkranz as “The Doctor Magician”, Jan Rose as “The Hostess” and Balsamo as himself. The show is directed by Northwestern graduate Jessica Fisch (Fefu and Her Friends at the Goodman Theatre/Rivendell Latina/o Celebration), and is produced by Opus Magica Music, LLC and Ricardo Rosenkranz. The artistic team includes  script by Eugene Burger, Jessica Fisch and Ricardo Rosenkranz, Set Design by Chip Von Weise, Sets by Ravenswood Studio, Lighting Design by Jennifer Kules, Prop Design and Construction by John Gaughan, and Musical Direction by Craig Terry (Lyric Opera of Chicago).

The Rosenkranz Mysteries opens December 4 and runs through December 24, 2016 with previews November 25-27. The show is intended for ages 12 and older. Tables in the cabaret space seat 4 guests ($75 per person). Regular tickets are $50 (with a seniors and students discount available). Performances will be held Thursdays and Fridays at 8:00 p.m., Saturdays at 2:00 p.m. and 8:00 p.m., and Sundays at 2:00 p.m. To purchase tickets or for additional information, visit www.ticketmaster.com or call the box office at 312.988.9000.