The Peninsula Chicago is hosting an exciting art exhibition from noted contemporary collector, Beth Rudin DeWoody’s art collection, curated by Laura Dvorkin in collaboration with Circa 1881. Titled Whoville, this exhibition coincides with the annual EXPO CHICAGO, the International Exposition of Contemporary & Modern Art, taking place at Navy Pier, September 22 to 25, 2016.  The installation, featuring a number of Chicago artists, debuts on September 9, 2016 and will be displayed throughout the hotel’s lobby through October 23, 2016, as a part of a public art project. Whoville is the latest project from The Peninsula Hotels’ ongoing partnership with Circa 1881 to present rotating art exhibitions of world-class contemporary art for the hotels’ public spaces. Circa 1881 produces art exhibitions and programming in collaboration with noted collectors or from artworks on loan from private  collections it has under management.

Beth Rudin DeWoody’s sizable collection is known for including emerging, established and sometimes overlooked artists and has been featured at the Norton Museum of Art in West Palm Beach and the Parrish Museum in Southampton, among other institutions. Beyond avidly collecting works, DeWoody curates exhibitions and supports several art institutions.

Of Whoville, DeWoody says, “Collaborating with Circa 1881 on this exhibition has provided an exciting opportunity to share my collection with Peninsula Chicago guests and the greater public. I look forward to attending EXPO CHICAGO and exhibiting the Whoville artists in Chicago, a city to which many of them are historically linked.”

Whoville contains over 30 artworks and is both an exclusive glimpse into the collecting world of Beth Rudin DeWoody, one of America’s most notable collectors, and a celebration of Chicago’s distinctive artistic history. The contemporary artworks were handpicked by the curator, Laura Dvorkin, who has worked with the BRD Collection for several years. The exhibition highlights some of Chicago’s most prominent artists, past and present, along with an eclectic selection of works that explore travel, transformative environments or share the fantastical, surreal aesthetic of Dr. Seuss’fictional land, Whoville. Featured artists include: Thomas Beale, Roger Brown, Nick Cave, Liz Craft, Mira Dancy, Ed Flood, Theaster Gates, Art Green, Richard Jackson, Kerry James Marshall, Bruce Nauman, Gladys Nilsson, Ed Paschke, Randy Polumbo, Nathaniel Mary Quinn, Christina Ramberg, Tony Tasset, H.C. Westermann and Karl Wirsum. The art represented in this exhibition spans an array of media including drawing, painting, collage, sculpture and installation in the form of a 1961 Caravel Airstream Trailer with hand blown glass, welded aluminum and LED lights. The latter composes Randy Polumbo’s Love Stream #2, which will be displayed outside the hotel from September 22 through 25. The piece will be open to the public for viewing daily from 12:00 pm to 5:00 pm. The rest of the collection is open to the public and will be displayed on the 5th floor main Lobby Level from September 9 to October 25. The pieces will be located adjacent to The Lobby and The Bar.

Maria Razumich-Zec, Regional Vice President and General Manager of The Peninsula Chicago says, “We are delighted that Ms. DeWoody will showcase pieces from her renowned collection at The Peninsula Chicago. Known for celebrating stimulating art within the hotel, we believe it is our obligation to continue to display works that provoke thought, emotion and dialogue. The pieces selected by Laura Dvorkin from Ms. DeWoody’s collection should accomplish this feat. We hope this collaboration with Circa 1881 will further elevate the perception of Chicago as a pillar among the world’s art community.”

“We are extremely grateful for our extensive partnership with The Peninsula Chicago as both our Official Hotel Sponsor and for their ongoing commitment to presenting international contemporary artworks to coincide with our exposition,” said EXPO CHICAGO President | Director Tony Karman. “Beth Rudin DeWoody is an internationally respected patron of the arts and her partnership with Circa 1881, featuring works from her extensive collection, is a not-to-be-missed exhibition as well as an important insight into the vision of one of the world’s leading collectors.”

Whoville, is a playful reference to the noted Chicago artist group, the Hairy Who, most of whom studied at the School of the Art Institute of Chicago and exhibited together at the Hyde Park Art Center in the 1960s. The Hairy Who challenged popular taste by producing whimsical, absurd, grotesque and sometimes vulgar imagery. Like the surrealists, they were interested in the stranger and darker aspects of the human mind. Three of the six founding members of the Hairy Who (Gladys Nilsson, Karl Wirsum and Art Green) are included in Whoville.

Kerry James Marshall, considered one of America’s greatest living artists, currently resides in Chicago and comments on the lack of black figures in Western Art and continues, through his work, to amplify the presence of black subjects displayed in museums. Kerry James Marshall: MASTRY is a major survey of Marshall’s work on view at the Museum of Contemporary Art Chicago through September 25, 2016.

*EXPO CHICAGO will also highlight the work of Kerry James Marshall during the keynote/Dialogues panel discussion at the exposition on Saturday, September 24 at 2:30 pm. Marshall joins writer Sarah Thornton for an in depth conversation on the show floor.

Chicago-based Nick Cave is an artist, educator and choreographer known for wearable art, working in both the visual and performing arts including sculpture, installation, video, sound and performance. Cave is well known for his Soundsuits, sculptural forms named after the noise they make when worn. When worn, Cave’s Soundsuits conceal the body, erasing identity, race, gender and class, causing viewers to look without judgment. 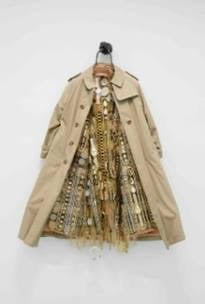 Chicago native Gladys Nilsson attended The School of the Art Institute of Chicago and is one of the 6 original members of the Hairy Who and a noted Chicago Imagist. She was the subject of a 1973 solo show at the Whitney Museum of American Art in New York.

Over the years, Nilsson’s work has evolved from oil painting to watercolor and collage, and often contains colorful contradictory images, humor and elements from nature. Couple is an early example of her powerful and energetic style.

The Peninsula Hotels continues its ongoing support of innovative public art around the world, by partnering with art museums, galleries and private collectors to enable guests to enjoy pioneering

works by established masters and emerging artists.  Each hotel has committed to supporting the arts, including a pioneering partnership with The Peninsula Hong Kong and the UK’s Royal

Museum Holon, Empowers Africa, New Yorkers for Children and The New York City Police Foundation, among others. She is an Honorary Trustee at the Brooklyn Academy of Music and on the Photography Steering Committee at the Norton Museum in West Palm Beach.

Two exhibitions of her collection were recently on view at the Norton Museum of Art: The Triumph of Love: Beth Rudin DeWoody Collectsand Still/Moving: Photographs and Video Art from the DeWoody Collection.

Dvorkin is also the Associate Art Consultant for the Eventi Hotel, New York and advises private clients. She is the former Sales Associate of Yossi Milo Gallery, New York and Associate Director of Salomon Contemporary, New York, where she curated the show #summerfridays in 2013.

Circa 1881 produces art programming and exhibitions of world-class contemporary art. Its clients are non-profit institutions and private companies interested in creating unique art experiences for their public spaces. The exhibitions are produced in collaboration with noted collectors or from artworks borrowed from Circa 1881’s Lending Library, consisting of inventory from collections it has under management. For more information about Circa 1881 visit www.c1881.com.

EXPO CHICAGO/2016, The International Exposition of Contemporary and Modern Art, is presented by Art Expositions, LLC. Now in its fifth year as a leading international art fair, EXPO CHICAGO (September 22 to 25, 2016) is a four-day art event featuring 145 leading international galleries and offering diverse programming including /Dialogues, IN/SITU,IN/SITU Outside, EXPO VIDEO and the Curatorial Forum. In addition,EXPO CHICAGO continues to publish THE SEEN, Chicago’s International Journal of Contemporary & Modern Art, following the first printed edition, which launched during the 2015 exposition. Under the leadership of President and Director Tony Karman, EXPO CHICAGO draws upon the city’s rich history as a vibrant international cultural destination, while highlighting the region’s contemporary arts community and inspiring its collector base. Vernissage, the opening night preview benefiting the Museum of Contemporary Art Chicago, takes place Thursday, September 22, 6pm to 9 pm. General Admission to the exposition is Friday, September 23 to Sunday, September 25 (for hours please visit expochicago.com). Tickets to the exposition are $20 for one day, $30 forthree days. Northern Trust is the Presenting Sponsor of EXPO CHICAGO. For more information about EXPO CHICAGO and EXPO ART WEEK (Monday September 19 to Sunday September 25), visit expochicago.com.

About The Peninsula Chicago

The Peninsula Chicago is a Five Star, Five Diamond hotel located on the “Magnificent Mile” at 108 East Superior Street (at Michigan Avenue), within the city’s premier shopping district. The 339 guest room hotel recently completed an extensive renovation of all guestrooms and suites.  The hotel opened in 2001 and features three distinctive restaurants, a popular bar and a world-class spa. For information on The Peninsula Chicago, please visit www.peninsula.com/chicago or call +1 (312) 337 2888or toll-free at +1 (866) 288 8889.