BET’S THE OTHER CINDERELLA Needs More To the Tale 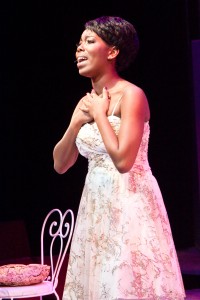 From the Brothers Grimm to sanitized Disney animations, fairy tales have certainly earned their place in musical cannon — they’re classics that can be endlessly reimagined on stage. And that’s precisely what Jackie Taylor and the Black Ensemble Theater attempt with the popular and long-running The Other Cinderella, which is now a staple on the holiday theater lineup.

Taylor’s original incarnation first appeared in 1976 as a school project she could perform with her students. But instead of the usual cast of characters, Taylor and her class gave them an Afro-centric spin, dubbing their new far off land The Kingdom of Other. Cinderella (Ta-Tynisa Wilson) is from the projects and forced to cook and clean for her sassy stepmomma (Dawn Bless), a harried Post Office employee busy taking care of her own feisty, bickering daughters (the perfectly cast Jessica Moore and Lisa Beasley).  Meanwhile at the palace, the King (Dwight Neal) and Queen (Rhonda Preston) fuss over the fact that their 25-year-old Prince (Lawrence Williams) isn’t ready to marry. Despite the prince’s protestations, they decide to throw a ball for everyone to attend — except Cinderella because she’s forced to stay at home by her cruel step family, whose hilariously over-the-top money-grubbing scenes are some of the best in the show. But as storytelling will have it, the Prince receives some lessons in confidence from the king’s enterprising new Page (Raymond Wise) just as Cinderella gets a new gown and stretch Hummer to attend the ball. And you know the rest — at least most of it.

Sound pretty familiar? Minus the character twists, it’s still a fairly faithful retelling of Cinderella. Disappointingly, the show isn’t a hugely reimagined, supremely creative version of a famous fairytale. A few additional characters — namely the Page’s buddies from the ‘hood (Brandon Holmes, Alyssa Zopp, Malcolm Thompson, Rueben Echoles), the royal couple’s attendant (David Simmons) and lady-in-waiting (Mandy Lewis) and even Dorothy from Kansas (Erin O’Shea) — make brief appearances with a song and a quick burst of dialogue. But the show fails to develop these seemingly arbitrary plot points, making the character’s larger issues seem shoehorned into the story. And while the show is rich with powerful voices and witty one-liners, it falls flat when it comes to reinterpreting an age-old tale.