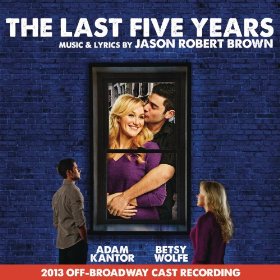 The beloved two-character musical, which has received more than 500 regional productions and 3,000 performances around the world, broke box office records for the Off-Broadway institution and ranks among the longest-running productions in the company’s 34 year history.  The show’s enduring global popularity was also the subject of a recent article in The New York Times.

The new recording of The Last Five Years was produced by Jason Robert Brown with Kurt Deutsch and Stacey Mindich serving as executive producers. The 2002 original cast recording of The Last Five Years – the label’s first cast album – remains one of their best-selling titles. Sh-K-Boom is also producing a feature film based on the show directed by Richard LaGravenese and starring Anna Kendrick and Jeremy Jordan. In addition, the label has released both the Broadway and London cast recordings of Brown’s 13 – The Musical, as well as his solo album Wearing Someone Else’s Clothes.

Jesse Green of New York Magazine calls The Last Five Years, “A gem of a show with jaw-dropping songs beautifully performed by Betsy Wolfe and Adam Kantor, who fill every daredevil leap and riff with torrents of feeling.  Jason Robert Brown has put together a beautiful, emotional experience.” Melissa Rose Bernardo of Entertainment Weekly calls the score, “Stunning…far and away Jason Robert Brown’s finest work,” and Joe Dziemianowicz of the Daily News raves that the show is “graceful, gripping and break-your-heart beautiful.  It’s impossible not to swoon.”

Jason Robert Brown’s contemporary musical The Last Five Years tells the emotionally powerful story of two twenty-something New Yorkers who dive head first into a marriage fueled by the optimism that comes with finding “the one.” But in a city where professional and personal passions collide and only the strongest relationships survive, navigating the waters of love and matrimony can sometimes prove too much. Funny, honest and intimate, with an exuberantly romantic score, The Last Five Years takes a bold look at one young couple’s hope that love endures the test of time.

On the heels of directing this production of The Last Five Years, Jason Robert Brown is currently working on two new musicals. Honeymoon in Vegas, with a book by Andrew Bergman, will premiere at the Paper Mill Playhouse this fall, and a musical adaptation of The Bridges of Madison County, which he wrote with Marsha Norman, will open on Broadway in January 2014 under the direction of Bartlett Sher.

8. The Next Ten Minutes

9. A Miracle Would Happen / When You Come Home To Me

13. Nobody Needs To Know

14. Goodbye Until Tomorrow / I Could Never Rescue You

Sh-K-Boom with its imprint Ghostlight Records has become the leading independent force in Original Broadway Cast Recordings – building a library of over 130 records in the last 13 years, featuring the most successful Broadway musicals and solo albums by Broadway’s biggest stars. Ghostlightrecently won the Grammy Award for The Book of Mormon, and released the OBCR of Newsies, the premiere recording of Carrie, the new Grammy-nominated cast recording of Anything Goes, plus the OCRs Catch Me If You Can, Sister Act and Women on the Verge of a Nervous Breakdown, as well as solo albums from some of Broadway’s biggest stars: Sutton Foster, Kelli O’Hara, Alice Ripley, Christine Ebersole, Melissa Errico and Ben Vereen. Other titles on Ghostlight include the Grammy Award-winning In the Heights, plus Next to Normal, Hair, Legally Blonde, Everyday Rapture, Passing Strange, Dirty Rotten Scoundrels, The 25th Annual Putnam County Spelling Bee and The Drowsy Chaperone. www.sh-k-boom.com.