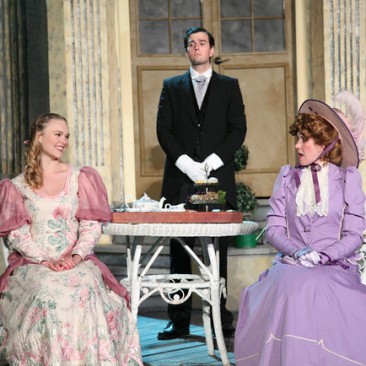 Oscar Wilde’s comic masterpiece The Importance of Being Earnest originally premiered in London on Valentine’s Day, February 14, 1895 and, just before his tragic fall, forever established his place in history as one of the greatest playwrights of the English language. Earnest also holds the record of being the second most produced play in modern history (Shakespeare being number one) and it’s humor, wit and charm still makes people laugh even in the worst of productions, a testament to his brilliant writing.

What many people do not realize is that Wilde was the first English playwright to introduce a naturalistic style of acting. Being appalled at the elocutionary and melodramatic method brought down through the ages from Shakespeare and frustrated by many of his actors’ creaky techniques he asked them to just speak as a normal person instead of singing the lines and flailing the arms. This was revolutionary to his audiences as well which is why he deliberately placed the most important stage direction for acting The Importance of Being Earnest directly under the title “A Trivial Comedy for Serious People.” This is his not so subtle hint as to how it should be played.

The play is primarily about deception and double identities. The actual importance of being earnest is the play’s tongue in cheek, double entendre moral taken to the literal sense. The two girls of marriageable age, Gwendolyn Fairfax and Cecily Cardew both want to marry a man by the name of Earnest – that is all that is important to them. The two male leads, John Worthing (aka Jack) and Algernon Moncrieff will not tell them the truth about their real names in order to hold on to them. The rest of the plot and action revolve around this stage device and ends with one of them truly being named Ernest. The play is known largely for its humor and scathing satirical view of the shallow values of society.

Director Kevin Theis, whose other directorial work I have often enjoyed, decided not to follow Wilde’s direction and stages it in the manner of a Fedeau farce with bits of self-concious business, overacting and painful mugging. Even though miked, the actors yelled out their lines in the elocutionary style that Wilde railed against in his time. He also fails to hear the rhythm of Wilde’s comic lines and the set up for all of the comic lines. The actors break the lines as if waiting for the audience to take their cue to laugh (the majority of the audience did not) instead of delivering them with simplicity, total seriousness and unbroken or highlighted. His lines are so outrageous that they play themselves without any interference from the actors. This is the case where all they need to do is speak the line and trust in the brilliance of Wilde’s writing.

I felt that much of the casting was flat wrong. Jude Willis’ Algernon Moncrieff (the Dandy character based on Wilde himself) pranced about the stage like a fey clown mugging, wincing and lifting his leg like a girl when kissed. There is a distinct difference between being an English Dandy (the equivalent of a male peacock excluding wit) and being a fop (the over the top caricatures of the French court of Louis XVI) which Theis, the Dramaturg and Willis failed to grasp. The only thing missing was heavy makeup. It was literally painful to watch and hear.

Elise Kauzlaric’s Gwendolyn, (Jack’s girlfriend and who is intent on marrying), comes off too old for the character. Her voice is also pitched too high and she tries way too hard to be funny. This character should be played as a mini Lady Bracknell (her domineering mother who echoes the moral severity of Queen Victoria), stern, controlling and domineering with a veneer of charm, unlike Lady Bracknell. Jack even asks Algernon if Gwendolyn will become like her mother in 150 years to which he replies “All woman become like their mothers. That is their tragedy. No man does, that’s his” backing up this important overlooked point in interpretation of the role. She did improve slightly in the most famous tea scene in the play and theatrical history where she and Cecily (Algernon’s cousin and the girl he loves and wants to marry) fight over who is married to phantom Ernest.

Brooke Helbert’s Cecily Cardew, Jack’s pretty young ward and the object of Algernon’s affection, is much too hard and worldly for the role (she would be better cast as Gwendolyn). Cecily should possess a naivety country girl quality and sweetness to act as a foil for the stern sophisticated Gwendolyn. This choice kills much of the innocent humor in her comic lines.

The two actors that are well cast and understand the style of Wilde are John Croswaithe (Jack) and Belinda Bremner (in the iconic role of Lady Bracknell) who plays their roles with the seriousness Wilde intends and, as a result, captures the majority of the laughs. Croswaithe also possesses the awkward charm needed for Jack and Bremner keeps tight reins on the disciplined style that makes Lady Bracknell sparkle.

Lynda Shadrake’s Miss Prism (Cecily’s tutor played brilliantly by Margaret Rutherford in the 1952 film) lacks the advanced age and does not come across as the old, pinched spinster Wilde sketches. Her costume is also completely wrong as she is dressed for travelling, not tutoring in a garden. She is of the servant class but her costume does not reinforce this distinction. She also fell into the trap of mugging and overplaying.

Mark Richard’s Dr. Chasuable (who is a comic statement on the clergy and the object of Miss Prism’s affection) while quirky, plays it too self-consciously for laughs (even though he did get them) in a vaudevillian style instead of playing it straight. You don’t have to push the pedal with any of these characters but when you try to make them funny destroy much of the humor.

The scenic design by Jacqueline and Richard Penrod lacks the grandeur and expensiveness for Wilde’s aristocratic world. I would never believe that Jack possesses the level of wealth through the settings. Particularly appalling are the thin chintz chair covers put over the white wicker to create indoor chairs. I was also surprised at the small scale of the set and stage which felt cramped and did not give the actors very much in the way of playing areas. If you tackle Wilde you can’t do it on the cheap.

Also lacking in detail and grandeur were the costumes (Wilde was very hands-on in the costume arena of his productions and created over-the-top ladies fashions which set the fashion trends of what women off the stage would wear). Rachel M. Sypnsiewski’s costumes lacked detail and, in some instances, were completely wrong (this should be embarrassing for a company that is 40 years old and receives a lot of money through grants and donors). The costumes were a hodgepodge; some were made (poorly) and others looked as if they had just been pulled from stock.

Another flagrant costuming mistake came in the second act when Jack enters in Victorian mourning attire, announcing the death of his brother Earnest. Sypniewski only had him clad in a black mourning coat but he lacked the black top hat with veil and gartered arm bands worn by the Victorians (established by Queen Victoria’s prolonged mourning for her husband Prince Albert) after the death of a family member. His two-toned shoes worn throughout the play were a major distraction to anyone who has the smallest sense of fashion and color.

Algernon was dressed in browns, lacking any suggestion of the English aristocratic Dandy (he is usually dressed in summer white linen when in the country not a brown suit) which made his look dull. He and Jack blended into the ochre set much of the time.

For those Wilde aficionados I advise avoiding this Earnest as it will make you cringe, both audibly and visually. For those who do not know much about Oscar Wilde and his work please realize that this is not how he intended his work to be presented.

The Importance of Being Earnest is presented at Austin Gardens in Oak Park through August 23rd. It runs Thursday through Sunday. Curtain is at 8:00 pm Thursday through Saturday and Sunday is at 7:00. You can bring your own chairs or rent them at the venue. www.oakparkfestival.com For calendar information visit TheatreInChicago.com