The Hypocrites’ THE 4TH GRADERS PRESENT AN UNNAMED LOVE-SUICIDE – Through November 8, 2015 at The Den Theatre 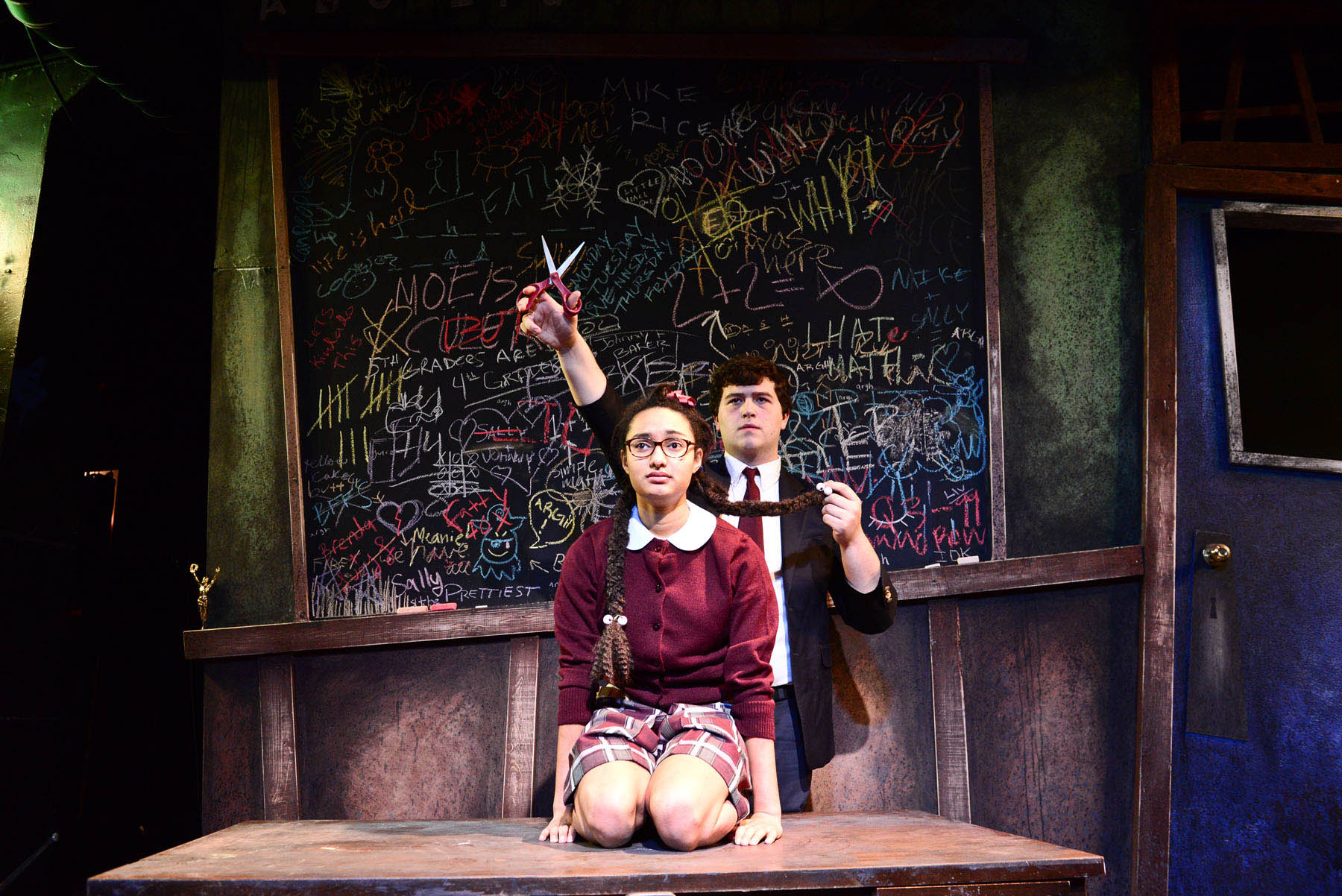 (left to right) Hunter Dunn and Brian Baren in The Hypocrites’ THE 4TH GRADERS PRESENT AN UNNAMED LOVE-SUICIDE by Sean Graney, co-directed by Joel Ewing and Mechelle Moe, a collaboration with Senn Arts Magnet High School’s “The Yard.” Photo by Evan Hanover.

The Hypocrites is pleased to continue its 2015-16 season with THE 4TH GRADERS PRESENT AN UNNAMED LOVE-SUICIDE by Artistic Director Sean Graney, co-directed by Joel Ewing and Mechelle Moe, featuring students from Senn Arts Magnet High School’s “The Yard.” This special collaboration will play eight performances only October 30 – November 8, 2015 at The Den Theatre’s Heath Main Stage, 1329 N. Milwaukee Ave. in Chicago. Tickets are currently available at www.the-hypocrites.com.

Fourth grader Johnny shoots himself, leaving behind a play as a suicide note that the kids in his class are forced to perform as a memorial. As friends and bullies assume the roles of Johnny and his classmates, a heartbreaking, darkly curious story emerges, offering a glimpse into the motivation behind Johnny’s actions.

Led by Joel Ewing and Mechelle Moe, The Yard is a collective of Senn Arts Magnet High School theatre students who have formed artistic alliances with professional theatre companies throughout Chicago. Through these partnerships, the theatrical institutions will provide a professional environment and mentorship to the developing theatre artists. Theatre relevant to young people, performed by young people.

THE 4TH GRADERS PRESENT AN UNNAMED LOVE-SUICIDE originally premiered at the side project in 2004.

“The Yard is excited to be in artistic alliance with The Hypocrites and honored to be a part of Sean’s wonderful play,” comments Senn Theatre Teacher and Co-Director Joel Ewing. “The Hypocrites have a rich tradition of theatrical ambition, risk-taking, creativity and innovation that our department finds unique and inspiring. The social and emotional codes of conduct the 4th graders experience during the making of their play are not unlike what our students face on a daily basis attempting to navigate the daunting public spaces of school classrooms, cafeterias and hallways. To have Sean’s play be brought to life by the very talented actors of The Yard is extremely relevant to their own lives and incredibly exciting for our audiences,” adds Ewing.

Sean Graney has directed over 30 productions for The Hypocrites since 1997, including the critically acclaimed All Our Tragic. He recently returned from a Fellowship at the Radcliffe Institute for Advanced Study at Harvard University. In 2004, Graney was a participant in the NEA/TCG Career Development Program for Directors. He has won four Joseph Jefferson Citation awards for the Direction and Adaptation for Sophocles: Seven Sicknesses, and Directing of Equus and Machinal. He has directed Edward II (Chicago Shakespeare Theater), The Hairy Ape (Eugene O’Neill Festival at Goodman Theatre), The Comedy of Errors, The Mystery of Irma Vep and What the Butler Saw (Court Theatre), Yankee Tavern (Milwaukee Rep) and The Elephant Man (Steppenwolf for Young Audiences). Graney currently serves as the Hypocrites’ Artistic Director.

Joel Ewing is the Lead Theatre Teacher at Senn Arts Magnet High School. He is a graduate of Missouri State University with a BFA in Theatre Performance and DePaul University where he completed his Masters in Secondary Education with an endorsement in both English and Theatre.  Joel is a recipient of the Teacher Incentive Grant from the Oppenheimer Family Foundation that underwrites the outstanding efforts of CPS teachers who enhance and enrich the educational lives of their students through project-based learning.  Joel has directed numerous productions at Senn Arts including Our America: Ghetto Life 101: Remorse and Mary Zimmerman’s Metamorphoses, both of which were selected for the 2014 and 2015 Illinois High School Theatre Festivals. Other productions include the upcoming I & You (first high school production of the play), An Evening of August Wilson, Picasso at the Lapin Agile, Seedfolks, Much Ago About Nothing, Our Town/The OT Project, Realize Life, Moments of Change, and Studs Terkel’s Working.  Joel is the Senn Arts coach for Louder Than a Bomb team, the world’s largest youth slam poetry festival. Joel also serves as the Education Director of the Rocky Mountain Repertory Theatre in Grand Lake, Colorado. He is a proud educational partner with some of Chicago’s finest theatrical institutions such as Steppenwolf Theatre Company, Lookingglass Theatre Company, The Goodman Theatre, American Theatre Company, Raven Theatre, Victory Gardens Theatre and Chicago Shakespeare Theater. Through Steppenwolf, Joel has been trained in Aesthetic Education as developed by the Lincoln Center Institute. Joel is also a proud community member of The Hypocrites, where has appeared recently in Three Sisters and Into the Woods. Joel recently served as the Artistic Director of LiveWire Chicago Theatre where he produced the Chicago premieres of Samuel D. Hunter’s A Bright New Boise and A Permanent Image. As an actor he appeared with LiveWire in The Mistakes Madeline Made, Oohrah! and The 13th of Paris.

Mechelle Moe is a founding member of The Hypocrites and a company member with TimeLine Theatre. She works as an actor, director, teaching artist and serves as Director of Education at Raven Theatre. Moe is a Jeff nominated actress who received a citation for actress in principal role for her performance in Sophie Treadwell’s Machinal with The Hypocrites and a nomination for actress in principal role for Ferber & Kaufman’s Stage Door with Griffin Theatre. In her career, Mechelle has appeared in over 40 productions locally including TimeLine’s The Apple Family Plays (That Hopey Changey Thing and Sorry), The Children’s Hour, Not Enough Air, My Kind of Town and Paradise Lost; The Hypocrites’ The Bald Soprano, Angels in America, The Glass Menagerie, andCurse of the Starving Class and Court Theatre’s What the Butler Saw. She has also worked with Griffin, Lifeline, A Red Orchid, Steppenwolf, Writers, among others. Moe has also landed on the Chicago Tribune’s Top 10 Performances of the Year list both in 2007 (What the Butler Saw) and 2010 (Stage Door).

As a lead teaching artist, Moe has worked for many organizations including Lookingglass Theatre, Court Theatre, Lifeline Theatre, TimeLine Theatre and Raven Theatre. Moe has co-directed and devised numerous works at Senn Arts including Our America: Ghetto Life 101:Remorse (which she also adapted) and Mary Zimmerman’s Metamorphoses, both of which were selected for the 2014 and 2015 Illinois High School Theatre Festivals. Her most recent project with Senn Arts was the docudrama Broken Text, an original work by Moe based on her interviews with men recently released from incarceration and living in a transitional facility. Mechelle graduated with honors from the University of Illinois Chicago with a Bachelors in Theater and Anthropology.

Artistic Director Sean Graney created The Hypocrites in 1997. The Hypocrites are recognized as groundbreakers that defy the audience’s expectations. The company has grown significantly in the past few years, receiving acclaim for productions at the Steppenwolf Garage, Goodman Theatre, Museum of Contemporary Art, DCASE Storefront and Chopin Theater. The company’s smash-hit production of Our Town, directed by David Cromer, transferred in 2009 to Off-Broadway, Los Angeles and Boston. The Pirates of Penzance has appeared at Actors Theater of Louisville and American Repertory Theater (A.R.T.). A.R.T. has also brought Romeo Juliet, 12 Nights and The Mikado (forthcoming). The American Theatre Wing, best known as the creator of the Tony Awards, presented The Hypocrites with one of the 2013 National Theatre Company awards in 2013. For more information, please visit www.the-hypocrites.com.