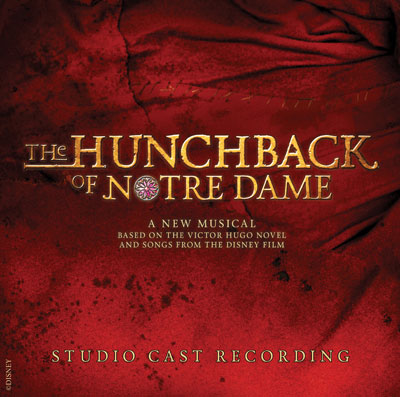 The highly anticipated Studio Cast Recording of The Hunchback of Notre Dame, the only stage collaboration from two masters of the American musical, Alan Menken and Stephen Schwartz, debuted in the top spot on Billboard’s Cast Albums chart. The album, available from Ghostlight Records, is also the 14th bestselling current album overall for the week and number 47 on the Billboard Top 200.  Digitally, the recording soared to number 5 on the iTunes Top Albums chart in its first day and was number 9 on Billboard’s Current Digital Albums chart for its first week.

The album is available digitally via iTunes at http://iTunes.com/Hunchback. The CD, which comes packaged with a 32-page booklet with full lyrics, photos, and a note from composer Alan Menken, can be purchased in-stores or by visiting http://sh-k-boom.com/hunchback-of-notre-dame. The album is produced by Michael Kosarin, Alan Menken, Stephen Schwartz, Chris Montan and Executive Producer, Kurt Deutsch.

The Hunchback of Notre Dame is available for professional licensing exclusively through Music Theatre International (212-541-4684, www.MTIshows.com).

This first ever recording of the acclaimed American stage score based on the Academy Award-nominated 1996 film brought together a 25 piece orchestra, a choir of 28 and some of Broadway’s most formidable talent: Michael Arden (Big River) as Quasimodo, Patrick Page (Spider-Man: Turn Off the Dark) as Dom Claude Frollo, Ciara Renée (Pippin) as Esmeralda, Andrew Samonsky (Lincoln Center’s South Pacific) as Captain Phoebus de Martin and Erik Liberman (Lovemusik) as Clopin Trouillefou.

The Hunchback of Notre Dame is a dramatic telling of the famous love story on a grand scale, with a lush, emotionally rich score featuring music by Alan Menken (Aladdin, Beauty and the Beast) and lyrics by Stephen Schwartz (Wicked, Pippin). With a book by Peter Parnell, The Hunchback of Notre Dame has orchestrations by Michael Starobin; Michael Kosarin is music supervisor, Brent-Alan Huffman is conductor/associate music supervisor and Rob Berman provides dance arrangements.

The show and score were hailed by critics on both coasts during the show’s regional theatre productions, directed by Scott Schwartz and choreographed by Chase Brock:  “Poignant and intensely emotional…Sparked by stellar performances, Hunchback sets its audience cheering” (Variety); “Potent and enchanting, it brings fresh depths to a saga of love and vengeance…a resounding pleasure” (San Diego Union Tribune); “One of the signal pleasures is Menken’s melodic music and Schwartz’s nimble lyrics” (The New York Times).

Sh-K-Boom with its imprint Ghostlight Records has become the leading independent force in Original Broadway Cast Recordings – building a library of over 150 records in the last 15 years, featuring some of the most successful Broadway musicals and solo albums by Broadway’s brightest stars. Founded by Grammy Award winner Kurt Deutsch, Sh-K-Boom/Ghostlight has won three Grammy Awards (for The Book of Mormon, In the Heights and Beautiful – The Carole King Musical) and is a frequent nominee, most recently for the OBCR of the 2015 “Best Musical” Tony Award nominee Something Rotten! Other notable recent releases include the 2014 “Best Musical” Tony Award winner A Gentleman’s Guide to Love and Murder, the 2014 “Best Score” Tony Award winner The Bridges of Madison County, Disney’s Newsies, Pippin and Rodgers + Hammerstein’s Cinderella, adding to a catalogue that includes OBCRs of Next to Normal, Hair, Legally Blonde,