The Goodman Theater; A Christmas Carol 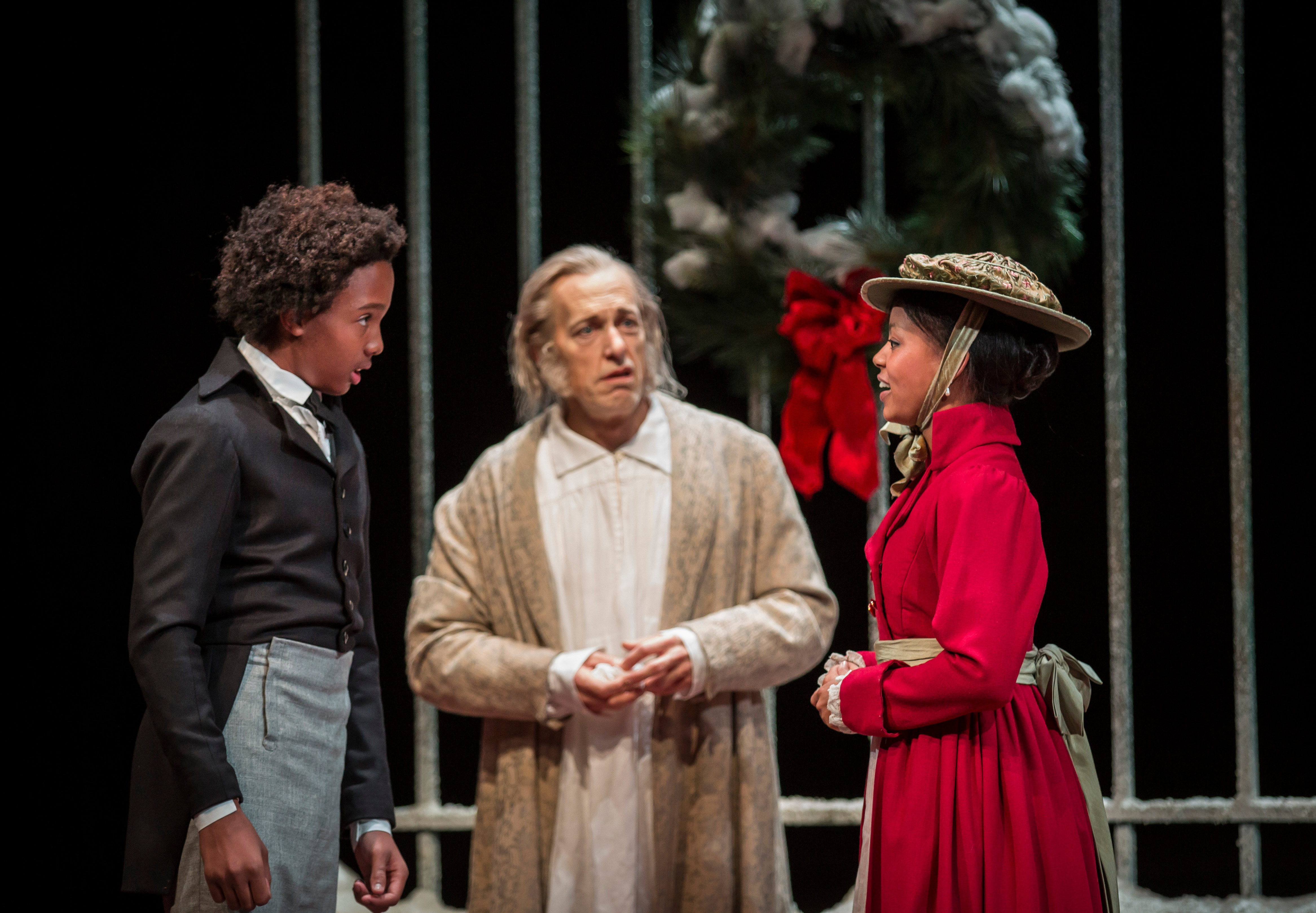 Well, that was indeed ‘A Christmas Carol.’ That’s the only thought I had while leaving the theater. The Goodman does a fantastic job of telling the tale with humor punctuating this deeply politically charged Christmas classic. The deeper themes are all well portrayed to the audience the goodwill towards men over greed for money. “Mankind should have been my business,” roars Jacob Marley, shaking his chains as lighting crashes overhead. Yes, the humor allows the audience to absorb this deeper theme that Dickens puts forth onto the earth so long ago. With a nod and a wink actor Larry Yando compels us to follow his portrayal of Ebenezer Scrooge, through the night of the spirits towards the reclamation of his soul from the Quagmire of earthly greed. His portrayal is done incredibly well in a Production with so many faults.

I left the theater thinking, Yup that was a Christmas Carol; indeed it was. Nothing on the stage was original and nothing was inspiring. In fact the cheap laughs, bought with a cheeky understanding of the material were the best points of the show. There is this saying I have heard, ‘there are people who do Shakespeare and those who do Shakespeare well; the difference being if the actors are playing Shakespeare characters or if they are playing human beings. From first visitation of the four Ghosts, Jacob Marley (played by Joe Foust,) I was put off by the “over large, we are doing classic literature here folks, appreciate it,” style of acting, the Cast was playing Dickens characters, NOT HUMANS! In other words the over acting was atrocious, pompous; you’re not supposed to be proud of wearing chains, Jacob.

Oh, and the chains drag behind him, they are not a suit of armor, and would a little white make up on the face have really killed you? He’s a ghost? Sheesh!

Dickens writing became classic because it portrayed humans. Humans dealing with a world that the upper 2-3% ruled over the rest of the world with money, the unwashed Masses of London were starving as the Oligarchs sat above them sipping tea and eating cake. Victorian England sounds a lot like contemporary America. The Goodman has done the world a disservice to the tale by taking these Humans this very contemporary plight, we see every day, and turning them in the characters. The Goodman relies solely on the name recognition of this classic piece to excite people. Yes this is a Christmas Carol, but honestly, it’s not.

Larry Yando, does a good job playing Scrooge, but his transformation is not built and there is no resistance to it, so that by the classic Graveyard scene that cracking point The Tombstone reading Ebenezer Scrooge is not the bam in your face old man, that it should be but rather, a yawn. This is how bad it gets, Ignorance and Want, the two demon children Christmas Present carries under her robes, are not a bit, they are not comedic, they are in fact a person being shot over a Gaming system on black Friday, or an old women being trampled for a good deal on a TV, funny No, is it? It’s part of the Christmas season as much as Wal-Mart opening its doors on Thanksgiving and forcing their slave labor wages to miss turkey day with their families or lose their jobs. Ignorance and Want, two intrinsic parts of Christmas Present, and not to be laughed at, not funny, and yet your audience found them so. This is the attitude of the presentation. Perhaps after 37 years of staging this production you have lost its meaning and chosen just to make mock of the material. You have lost its meaning.

Only one of the Ghosts was well done, and that was Present, Lisa Gaye Dixon, who plays this spirit does amazing job, it’s too bad that she is surrounded by such a meh production. To be Ron E. Rains does a fair job at Bob Cratchit, and the acting is not entirely bad by most of the background characters. The acting is not the problem in fact. It’s the production. Don’t get me wrong the Goodman stages the show well – but when you have The Goodman’s Bank that is not a problem – throw money at it and of course it will look good. But the artistic choices were profound excrement.

In the 90’s Tim Burton created a great series of Batman Movies, then Joel Schumacher took the reins and added nipples to the Bat Suit. That’s how bad this was, this production was, it was “ Nipples on the Batsuit Bad”. As the Drag Queen Ghost of Christmas Past hit the stage, I knew the Goodman had chosen to go Schumacher crazy- Nice body Patrick, but your performance was so stiff I thought Medusa had hit you with her gaze back in Sparta where I assume you came from by the costuming. The Ghost of Christmas Yet To Come? What the hell is that, did you steal a cross from a church and drape a death cowl over it? Oh scary – or it could be if the thing bearing any resemblance to a human form, for real, human shoulders tend to curve down. Was your sculpture smoking crack? Oh – I know we in the theater world expect our audiences to suspend disbelief and except the reality of the show. First you must draw us into that reality; get the audience to trust your version of our world, you blew that in act one. Before I go further; let me state, I loved the diversity of your cast, I am all for diversity – however, I just want to ask, because this is where you lost any trust I had in your reality, how can an African American child grow up into an old White Man? Seriously, with the possible exception of Michael Jackson I cannot think of an instance in the entirety of human existence that someone has changed race during puberty? I know nit-picky and, oh we must be diverse, and oh no I went there, but honestly, if you want an African American Scrooge cast one!!!! I am fine with that, what I am not fine with is that at some point between school age and apprenticeship some alien race came down altered Ebenezer’s genetic code and transformed him entirely. I assume you didn’t expect anyone to care or even notice, what with the drag queen angel prancing around the stage like Rocky, in The Rocky Horror Picture Show. Honestly I was waiting for Fezziwig’s Christmas Party to bust out into the Time Warp. Actually – that would have been awesome!

So apart from getting a laugh from the central theme of the show when Ignorance and Want are revealed, and loosing that in your face revelation of Scrooge’s grave to a tiny little thumb tack in the middle of the stage. . . You lost the point of this Christmas Classic! So that when Tiny Tim says “and God bless us every one” he should add “cause why the heck not, we already got your ticket money?”

Ah what the heck, people go see it, after all it is a Chicago tradition, and so why not…???