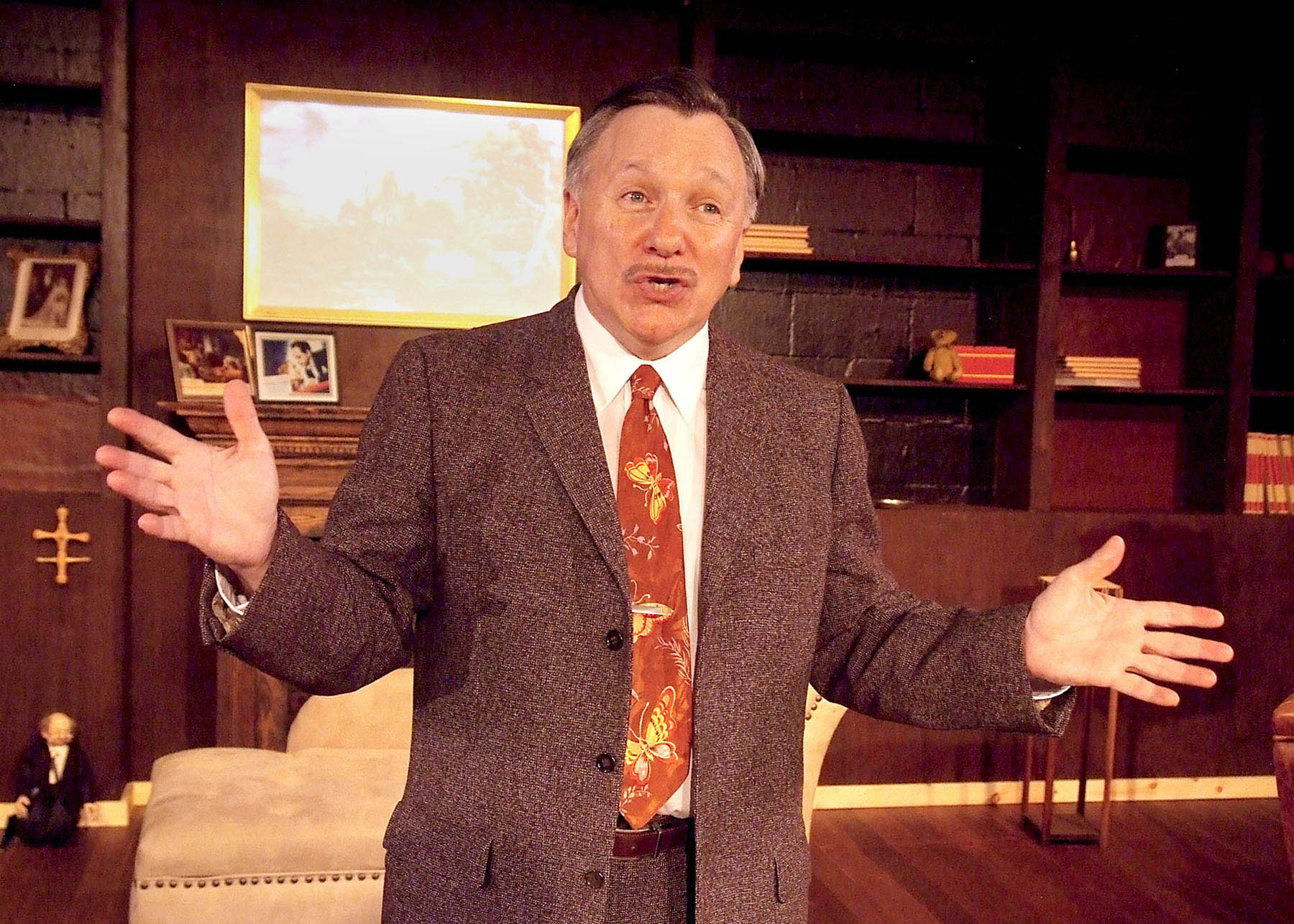 The fascinating life of Chicago newspaperman turned legendary playwright, screenwriter and novelist Ben Hecht takes center stage in Grippo Stage Company’s world premiere of THE BEN HECHT SHOW, written and performed by James Sherman and directed by Dennis Začek. Based on Ben Hecht’s books A Guide For the Bedevilled and A Child Of the Century, in which Hecht confronts his own identity as an American Jew in the wake of the Nazi Holocaust, THE BEN HECHT SHOW will play June 10 – July 17, 2016 at Piven Theatre at Noyes Cultural Center, 927 Noyes St. in Evanston. Tickets are currently available at grippostagecompany.com.

Actor-playwright James Sherman portrays Ben Hecht in this engaging and thought-provoking story of the 1920s Chicago newspaper journalist (Chicago Journal, Chicago Daily News) who later found fame as a playwright (The Front Page, On The Twentieth Century), screenwriter (Nothing Sacred, Wuthering Heights, Spellbound) and novelist. In his post-Holocaust books of memoirs, A Guide for the Bedevilled and Child of the Century, Hecht also describes his own upbringing as an assimilated American Jew and his burgeoning activities in support of European Jewry and the creation of Israel.

“The first play I did with Dennis Začek, The God of Isaac, related my own story of growing up in Skokie and confronting my own identity as an American Jew during the ‘Neo-Nazi incident’ of the late 1970s,’ comments James Sherman. “When I read Hecht’s book, A Guide for the Bedevilled, I was awe-struck by the fact that Hecht had wrestled with the same questions a generation ago. Upon reading Hecht’s memoirs, I had three thoughts. One, Hecht was a brilliant writer. Two, the issues of Jewish identity and anti-Semitism that Hecht writes about are remarkably topical. And, three, I want to do this as a one-man show. Through Chicago’s own Newberry Library, where The Hecht Collection is housed, I obtained the rights to use Hecht’s own words and compiled the script using material from his two books of memoirs. I’m thrilled to be able to bring to life this important and fascinating character,” adds Sherman.

Written and performed by: James Sherman

Based on: the books A Guide For the Bedevilled and A Child Of the Century by Ben Hecht

The Life of Ben Hecht

Ben Hecht (February 28, 1894 – April 18, 1964), the son of Russian-Jewish immigrants, grew up in New York City and Racine, Wisconsin. He worked as a reporter for the Chicago Journal and then the Chicago Daily News during the WWI era and The Roaring Twenties. Immediately following World War I, the Daily News sent him to cover Berlin, where he was exposed to the German nationalism and anti-Semitism that would help bring Hitler to power. From this experience came some of the material for his first novel, Erik Dorn. For the Daily News, he developed a groundbreaking column that formed the basis of his collection of sketches A Thousand and One Afternoons in Chicago. Lively reminiscences of Hecht’s Chicago years are found in his Gaily, Gaily, Letters from Bohemia, A Guide For the Bedevilled and his autobiography, A Child of the Century. Hecht collaborated with Charles MacArthur, another Chicago newspaperman and the husband of Helen Hayes, on the classic farce The Front Page (1928), set in the pressroom of the old Chicago Criminal Courts Building adjoining the Cook County Jail. It was based on their joint experiences covering criminal cases there. The newspapers depicted in the play are based on the City News Bureau, the Chicago Daily News and the Chicago American.  Hecht and MacArthur also collaborated on the successful stage comedy Twentieth Century (1923).

In Hollywood, Hecht wrote wrote or co-wrote over 70 screenplays for directors including Alfred Hitchcock, John Ford, Howard Hawks, William Wyler and Henry Hathaway. His motion pictures include The Front Page (film version 1931), The Scoundrel (1935), Nothing Sacred (1937), Gunga Din (1938), Wuthering Heights (1939), Spellbound (1945) and Notorious (1946). Hecht also wrote the script for the film Spectre of the Rose (1946). Hecht won an Oscar for best original story for Underworld (1927) at the first Academy Awards in 1929. He was nominated five more times for the Best Writing Oscar, winning (along with writing partner and friend Charles MacArthur) for The Scoundrel (1935). The other nominations were for Viva Villa! (1934), Wuthering Heights (1939, shared with MacArthur), Angels Over Broadway (1940) and Notorius (1946). One of Hecht’s earliest screenplays, Scarface, was loosely based on Al Capone and set in Chicago and starred Paul Muni and a pre-Frankeinstein appearance by Boris Karloff. The screenplay was later used as the basis for the Al Pacino remake, though the setting was changed to Miami for the film. After his death in 1964, Hecht’s widow bequeathed his copyrights to Chicago’s Newberry Library.

James Sherman (Playwright/Actor) is the author of the plays Magic Time, The God of Isaac, Mr. 80%, The Escape Artist, Beau Jest, This Old Man Came Rolling Home, Jest a Second!, Romance in D, From Door to Door, The Old Man’s Friend, Affluenza!, Half and Half, Relatively Close and Jacob and Jack, James was a theatre student at Illinois State University in the early 1970s. He began his professional career as a writer and performer with The Second City in Chicago and received an M.F.A. degree from Brandeis University.  In 1985, he began his long association with the Tony Award-winning Victory Gardens Theater in Chicago and he was a Founding Member of the Victory Gardens Playwrights Ensemble. Beau Jest, Magic Time, The God of Isaac, Mr. 80%, Jest a Second!, Romance in, From Door to Door, Affluenza!, Half and Half and Jacob and Jack have been published and are regularly produced by theatres throughout the U.S. and have also been seen in Canada, Mexico, South America, England, Germany, Austria, Turkey, South Africa, Australia, China and Korea. In the summer of 2006, James wrote and directed the movie of his play, Beau Jest, starring Lainie Kazan, Seymour Cassel and Robyn Cohen. James currently teaches Playwriting and Improvisation at Columbia College Chicago and DePaul University. He has been a teacher of Playwriting and Acting on the faculties of The Second City Training Center, Chicago Dramatists Workshop and Victory Gardens Theater. In 2001, he was a visiting professor in Seoul, South Korea at the Korean National University of the Arts. He has led workshops in Improvisation at the Esalen Institute in Big Sur, California.  He has been the recipient of fellowships from The MacDowell Colony, the Ragdale Foundation, The Virginia Center for the Creative Arts and Yaddo. He is a member of The Dramatists Guild of America. He lives in Chicago.

Dennis Začek (Director) is Artistic Director Emeritus of Victory Gardens Theater where he held the position of Artistic Director for 34 years. He recently accepted the Actors’ Equity Association’s (AEA) Spirit Recognition Award. The Spirit Award is given to institutions that “have made non-traditional casting a way of life.” He also received the 2005 Jeff Award for Outstanding Achievement in Chicago Equity Theatre. He, his wife Marcelle McVay, and the theater are co-recipients of the 2001 Tony Award for Outstanding Regional Theatre. He is also the recipient of the 2004 Artistic Leadership Award from the League of Chicago Theatres. Začek and Ms. McVay received the 1999 Rosetta Lenoire Award from Actors’ Equity and the 1998 Sidney R. Yates Arts Advocacy Award from the Illinois Arts Alliance Foundation. Currently, he holds the position of Resident Director at the Fringe Theater in Key West. Začek is a professor emeritus of Loyola University and was included in 2005 in Utne magazine’s first-ever list of “Artists Who Will Shake the World.” He has directed more than 250 productions. Also, he is the world’s greatest authority on James Sherman having directed the world premieres of fourteen of Sherman’s plays.

Building off his success producing theater since 1987, Charles Grippo founded Grippo Stage Company, Inc., as a 501 (c) (3) public charity. Its mission is to use theater to explore social issues and celebrate diversity.

THE BEN HECHT SHOW is not produced by or affiliated with Piven Theatre Workshop.