THE AUDITORIUM THEATRE CELEBRATES 10 YEARS OF “TOO HOT TO HANDEL: THE JAZZ-GOSPEL MESSIAH,” JANUARY 17 AND 18 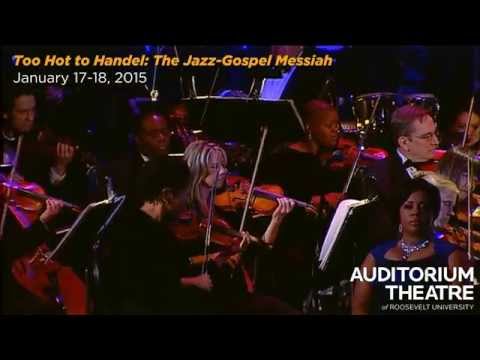 “As we celebrate the tenth anniversary of our production of ‘Too Hot to Handel’ in Chicago, we are excited to think of the thousands of people who have been entertained by the show,” said Auditorium Theatre Executive Director Brett Batterson. “Likewise, we continue to be enlightened by the show’s spirit and message of peace. It has become a city-wide celebration of the legacy of a great American—Dr. Martin Luther King, Jr. The Auditorium looks forward to hosting this production for many years to come.”

Now in the midst of its historic 125th Anniversary Season, the Auditorium Theatre presents “Too Hot to Handel” as part of the “Made in Chicago” Performance Series featuring some of Chicago’s best homegrown music and dance talent.

“Too Hot” first premiered at the Little Rock Baptist Church in Detroit, earning a reputation for its lively vocals and communal revelry. In January 2006, the Rackham Symphony Choir combined forces with the “Too Hot” Chicago Choir for the show’s Chicago debut at the Auditorium. Recently, the show has been enhanced through a large high-definition screen that captures both the performers and audience members during the concert. Video enhancements made possible through the generosity of William and Shelley Farley.

A one-hour Student Matinee performance is offered on Friday, January 16, open to any student groups elementary through high school for $10 each. Tickets are available by calling (312) 341-2357 or by contacting sales@auditoriumtheatre.org.

In tandem with the “Too Hot to Handel” performances, the Auditorium Theatre’s Department of Creative Engagement utilizes innovative programming to engage Chicago students in the celebration of Martin Luther King, Jr. and the power of music and community. For the 8th consecutive year, the Auditorium invites Chicago Public School students, grades 3-12, to write an original poem celebrating Dr. King’s vision of the “beloved community.” The grand prize-winner will receive 4 free tickets to the “Too Hot to Handel” opening night performance and will recite their poem on stage before the show.

The Auditorium Theatre’s Department of Creative Engagement also presents the first annual “Too Hot to Handel: Choral Festival” on January 14, 2015, an all-encompassing residency that incorporates choral music and celebrates Dr. King’s vision of unification and communal prosperity. The fest welcomes four Chicago area choirs to participate in choral workshops and master classes with “Too Hot to Handel” artists, including conductor Suzanne Mallare Acton and soloists Rodrick Dixon and Alfreda Burke. Participating choirs, to be announced December 17, will also have the opportunity to take a private tour of the Auditorium Theatre, as well as a tour of Roosevelt University’s Chicago College of Performing Arts Music Conservatory—one of the earliest conservatories founded in the United States.

Also available to CPS Grades 3–8: a One-Week Residency beginning January 12, in which students will create an original musical composition under the guidance of a “Too Hot” Teaching Artist; and a One-Day Residency that asks students to create a piece of visual art symbolizing their commitment to positive self-expression.

Contact Director of Creative Engagement Christina Bourné at (312) 341-2353 or cbourne@auditoriumtheatre.org for more information on these residencies.

“Too Hot to Handel” Sponsors

The Auditorium Theatre of Roosevelt University, located at 50 E. Congress Pkwy, is an Illinois, not-for-profit organization committed to presenting the finest in international, cultural, community and educational programming to Chicago, and to the continued restoration and preservation of the National Historic Landmark Auditorium Theatre. In September of 2014, the Auditorium Theatre was awarded the inaugural Fifth Star Award by Mayor Rahm Emanuel and the Chicago Department of Cultural Affairs and Special Events. The Auditorium Theatre is generously supported by the MacArthur Foundation, the Illinois Arts Council, the Sage Foundation, and the Palmer House Hilton. For more information about programming, volunteer and donor opportunities or theatre tours, call (312) 341-2310 or visit AuditoriumTheatre.org.