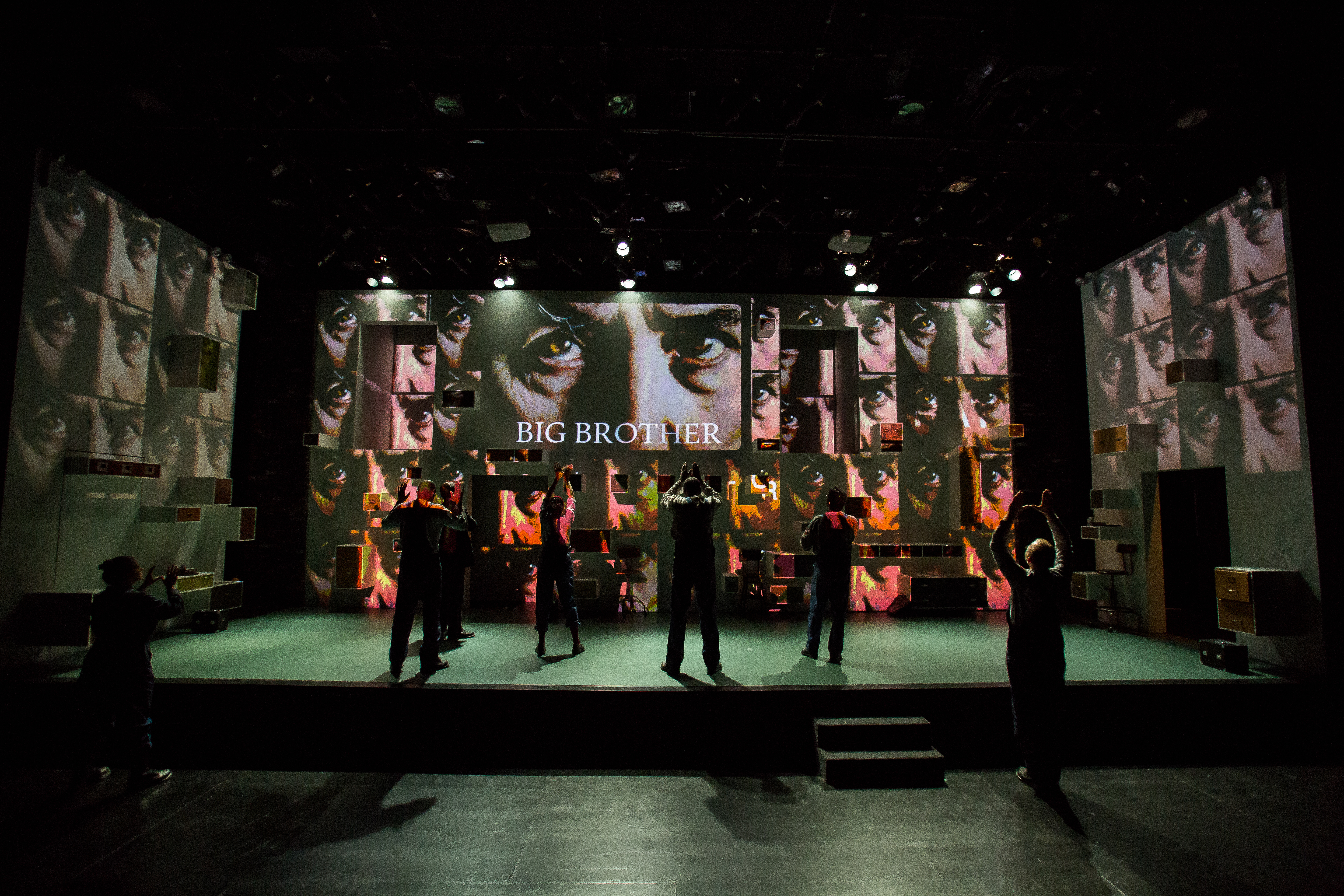 On the heels of a sold-out production of George Orwell’s Animal Farm last season, Steppenwolf for Young Adults(SYA) begins the 2015/16 season with another Orwellian masterpiece, 1984. Adapted by Andrew White and directed by SYA Artistic and Educational Director Hallie Gordon, 1984 receives a multi-media production that is a haunting, shockingly timely look at a future that seems disturbingly present. Performances began October 21 and continue through November 20, 2015 in the Upstairs Theatre (1650 N Halsted St)

Public performances of 1984 take place Fridays at 7:30pm, Saturdays at 3 and 7:30pm and Sundays at 3pm (except October 23) through November 15, 2015. Single tickets ($20) for public performances are available through Audience Services at 312-335-1650 and steppenwolf.org; $15 tickets available with valid student I.D. Note: Student performances run through November 20 and have sold out. Full calendar enclosed. 1984 is recommended for ages 14 and up. A study guide created by SYA is available online.

Winston Smith works for the Ministry of Truth located in the nation of Oceania, part of a vast empire in a constant, shifting war against other superstates. Dissent is not tolerated (not even in thought), and Winston and his fellow citizens are under perpetual electronic surveillance by their ever-watchful ruler Big Brother. When Winston falls in love with a co-worker, their illegal affair pushes them to rebel and face the darkest

and most dangerous corners of the regime.

“At the center of 1984 is a man struggling to remember his childhood and the life that he had before war time. It made me question, what is it like to grow up in a constant state of war?” shares director Hallie Gordon. “It is unsettling that 1984 is still so relevant today. Our production is set in 2015, which inevitably brings to light how technology today is changing our lives and beliefs.”

Andrew White, who won a 2004 Joseph Jefferson Award for Best Adaptation, describes revisiting the work ten years later: “In the days following the attacks of September 11th, I, and everyone I knew, walked the streets, gazed up at the sky, and rode the train with a new alertness and a fear most of us had never experienced before — fear of the next attack. War, and how it affects both language and thought, was what most interested me then.”

“Now, more than ten years later, the technology landscape has changed radically, and the world of constant surveillance that Orwell posits no longer feels at all futuristic — it is now. For better and for worse, 1984 will always be relevant — it certainly feels so now more than ever,” shares White.

The 1984 cast of professional actors features Matthew Abraham as Young Winston, Atra Asdou as Julia, Lance Baker as O’Brien, Elizabeth Birnkrant as Syme and others, Manny Buckley as Parsons and others, Dennis Grimes as Tillotson, Martin and others, Tyrone Phillips as Ampleforth and others and Adam Poss as Winston.

Andrew White is a founding member of Lookingglass Theatre Company, where he currently serves as Artistic Director. As a Lookingglass Ensemble Member and performer, he has participated in the workshop and development of more than 30 Lookingglass original adaptations and world premieres. He wrote and directed the company’s 1989 production of Of One Blood, about the 1964 murders of Schwerner, Chaney and Goodman in Mississippi. White wrote the book and lyrics for the musical Eastland produced at Lookingglass in 2012.

Hallie Gordon (Director, George Orwell’s 1984) serves as Artistic and Educational Director of Steppenwolf for Young Adults. Along with selecting the young adult productions each season, she has created the Young Adult Council, a group of high school students who collectively help to create innovative programming for their peers. As Educational Director, Gordon has worked closely with the Chicago Public Schools to create an environment in which all students and teachers have access to the theater. For Steppenwolf, she has directed Animal Farm, Leveling Up, The Book Thief, The Heart is a Lonely Hunter, To Kill a Mockingbird, The House on Mango Street and Harriet Jacobs. A new premiere of Toni Morrison’s The Bluest Eye, also adapted by Lydia R. Diamond, won a Black Excellence Award from the African American Arts Alliance of Chicago and also transferred Off-Broadway to The New Victory Theatre. Gordon is the recipient of The Helen Coburn Meier & Time Meier Achievement Award.

The Scene, an event specifically for teens and curated by the Young Adult Council, takes place Saturday, November 7 at 758 W North Ave., following the 7:30pm performance. For tickets or more information, call 312-335-1650 or contact Steppenwolf for Young Adults Education AssistantJared Bellot at jbellot@steppenwolf.org.

SYA presents 1984 by George Orwell (Copyright, 1949) by permission of Bill Hamilton as the Literary Executor of the Estate of the Late Sonia Brownell Orwell. This adaptation of 1984 was originally developed and produced by the Lookingglass Theatre Company in 2004 at their theater in Chicago’s Water Tower Water Works.

School performances (Tuesday – Friday at 10am) are reserved for school groups only. Contact Jared Bellot at jbellot@steppenwolf.org or312-654-5643 for more information.

From one classic story to one cutting edge experience, SYA’s 2015/16 season investigates how your past decisions, actions and even thoughts, inform your future. SYA concludes the season with the world premiere of The Compass developed and directed by Michael Rohd, a groundbreaking, live interactive performance that explores the intersection of technology and decision-making. Performances run February 24 through March 12, 2016 in the in the Downstairs Theatre; the press performance is Saturday, February 27 at 3pm. Tickets to public performances ($20, $15 with student I.D.) are on sale through Audience Services (1650 N Halsted) at 312-335-1650 and steppenwolf.org.

At the center of The Compass is a trial, determining the fate of a young person who used an app to make a life-altering decision. When you join us as audience members for the show, you become the Jury. In this play, every show will end differently, depending on what you, the Jury, decide. Join us as we navigate the question: When someone else, or something else, tells you what to do, what exactly are you responsible for?

Steppenwolf Theatre Company is a participant in the Audience (R)Evolution Program, funded by the Doris Duke Charitable Foundation and administered by the Theatre Communications Group, the national organization for the professional not-for-profit American theatre.

Steppenwolf Theatre Company is America’s longest standing, most distinguished ensemble theater, producing nearly 700 performances and events annually in its three Chicago theater spaces—the 515-seat Downstairs Theatre, the 299-seat Upstairs Theatre and the 80-seat Garage Theatre. Formed in 1976 by a collective of actors, Steppenwolf has grown into an ensemble of 44 actors, writers and directors. Artistic programming at Steppenwolf includes a five-play Subscription Season, a two-play Steppenwolf for Young Adults season, First Look, a new play development series and Visiting Company engagements. While firmly grounded in the Chicago community, nearly 40 original Steppenwolf productions have enjoyed success both nationally and internationally, including Off-Broadway, Broadway, London, Sydney, Galway and Dublin. Steppenwolf has the distinction of being the only theater to receive the National Medal of Arts, in addition to numerous other prestigious honors including an Illinois Arts Legend Award and 12 Tony Awards. Anna D. Shapiro is the Artistic Director and David Schmitz is the Managing Director. Nora Daley is Chair of Steppenwolf’s Board of Trustees. For additional information, visit steppenwolf.org, facebook.com/steppenwolftheatre andtwitter.com/steppenwolfthtr.