TEATRO VISTA’S CHICAGO PREMIERE OF “IN THE TIME OF THE BUTTERFLIES” AT VICTORY GARDENS THEATER, APRIL 16 – MAY 22 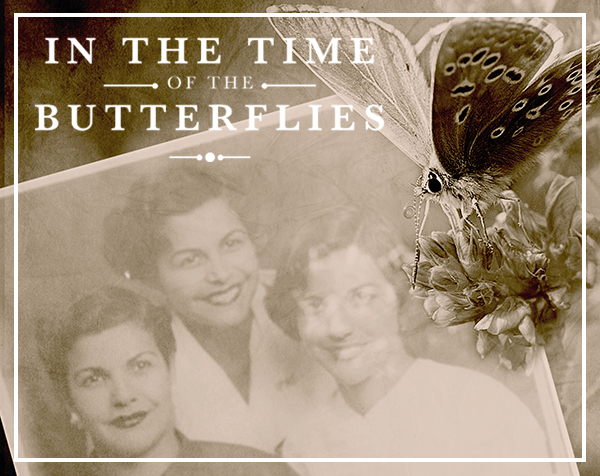 Teatro Vista announces the Chicago premiere of In the Time of the Butterflies, written by Lifetime Achievement Obie Award Winner Caridad Svich, based on Julia Álvarez’s acclaimed novel, and directed by Ricardo Gutiérrez, playing in the Richard Christiansen Theater at Victory Gardens Theater, 2433 N. Lincoln, April 16 – May 22. Opening night is Friday, April 22 at 7:30 p.m. Preview performances run from Thursday, April 16 through Thursday, April 21. Regular performances are Thursdays, Fridays and Saturdays at 7:30 p.m. and Sundays at 3 p.m. Tickets are $20 for previews, $25 for Thursdays and Fridays, and $30 for Saturday and Sunday performances. Students and seniors (+65 years or older) with valid ID are able to purchase $17 tickets. Discounts are also available for groups of 10 or more. To purchase tickets, please call 773.871.3000 or visit www.teatrovista.org.

Based on Julia Álvarez’s popular novel, In The Time of the Butterflies, is a fictionalized account of the story of the courageous Mirabal sisters from the Dominican Republic. The sisters inspired resistance cells throughout the country against the dictatorial regime of Gen. Rafael Leónidas Trujillo. The ‘butterflies,’ their secret code name, were brutally murdered by the regime in 1960

In 2010, Playwriting Lifetime Achievement Obie Award Winner, Caridad Svich, partnered with Julia Álvarez to devise a theatrical adaptation of the novel. The result is a new play that preserved the key elements of the novel with a new creative dramatic arch, original dialogue brimming with poetry and captivating imagery that paints a visual dreamscape of the interior lives of the activist sisters, the beauty and ferocity of the natural world, and the music heard on the radio of the time.

NOTE: Recognizing the historical significance of In the Time of the Butterflies, Teatro Vista is presenting three school day matinees on Wednesdays May 4, 11 and 18 at 10 a.m. as part of its Educational Outreach Program. On December 17, 1999, the United Nations General Assembly designated November 25 (the anniversary of the day the Mirabal sisters were murdered) as the annual date for the International Day for the Elimination of Violence Against Women, in commemoration of the sisters. This day also marks the beginning of the 16 days of Activism against Gender Violence. In the Time of the Butterflies is part of the National Endowment for the Arts’ Big Read Initiative along with classic novels To Kill a Mockingbird and The Great Gatsby. Study guides are available for school groups and bookclubs on http://www.neabigread.org. To reserve for school day matinee performances, please call 773-599-9280 x 559 or e-mailboxoffice@teatrovista.org.

Caridad Svich received a 2012 OBIE Award for Lifetime Achievement in the theatre, a 2012 Edgerton Foundation New Play Award and NNPN rolling world premiere for Guapa, and the 2011 American Theatre Critics Association Primus Prize for her play The House of the Spirits, based on Isabel Allende’s novel. Svich has won the National Latino Playwriting Award (sponsored by Arizona Theatre Company) twice, including in the year 2013 for her play Spark. She has been short-listed for the PEN Award in Drama four times, including in the year 2012 for her play Magnificent Waste. Her works in English and Spanish have been seen at venues across the US and abroad. Svich’s play In the Time of the Butterflies most recently received its world premiere at San Diego Repertory Theatre.

Among Svich’s key works are 12 Ophelias, Any Place But Here, Alchemy of Desire/Dead-Man’s Blues, and Iphigenia Crash Land Falls on the Neon Shell That Was Once Her Heart (a rave fable). Seven of her plays are published in Instructions for Breathing and Other Plays (Seagull Books and University of Chicago Press, 2014). Five of her plays radically re-imagining ancient Greek tragedies are published in Blasted Heavens. Among Svich’s awards/recognitions are: Harvard University Radcliffe Institute for Advanced Study Fellowship TCG/Pew Charitable Trusts National Theater Artist Residency at INTAR, NEA/TCG Playwriting Residency at the Mark Taper Theatre Forum Latino Theatre Initiative.

She is alumna playwright of New Dramatists, Drama Editor of Asymptote literary journal, associate editor of Contemporary Theatre Review (Routledge,UK), contributing editor of TheatreForum, and founder of NoPassport theatre alliance and press (www.nopassport.org), which recently published Todd London’s collection of essays The Importance of Staying Earnest. She is a Lifetime Member of EST, and is on the advisory board for the US-Mexico Exchange at the Lark Play Development Center in New York City. She holds an MFA in Playwriting from UCSD.

ABOUT RICARDO GUTIÉRREZ, director
Ricardo Gutiérrez is the executive artistic director of Teatro Vista where he recently directed Raúl Castillo’s Between You, Me and the Lampshade. For Teatro Vista, he has also directed A View From the Bridge, Momma’s Boyz, i put the fear of mexico in ’em, and La Magica Posada.  Gutiérrez has served as the artistic director of Nostotros in Los Angeles, The Canterbury Theatre in Indiana, and Absolute Shakespeare in Chicago.  Regionally, Gutiérrez     has guest directed at Theatre 40, Nosotros, the Bilingual Foundation of the Arts, The Double Image Theatre, Loyola University and the University of Texas Pan Am. He is the co-founder and director of the Alliance of Latino Theatre Artists Chicago (ALTAchicago), a service organization dedicated to promoting and fostering Latino/a theatre artists in Chicago. As an actor, Gutiérrez most recently appeared in the world premiere of The Upstairs Concierge at the Goodman Theatre where he was also recently seen in the world premieres of Song For The Disappeared and Fishmen. He has appeared on stage at the Actors Theatre in Louisville, The Denver Center Theatre, Steppenwolf Theatre, Victory Gardens Theatre, and at Lookingglass Theatre.

Julia Álvarez has written novels (How the García Girls Lost Their Accents, In the Time of the Butterflies, ¡Yo!, In the Name of Salomé, Saving the World), collections of poems (Homecoming, The Other Side/ El Otro Lado, The Woman I Kept to Myself), nonfiction (Something to Declare, Once Upon A Quinceañera, A Wedding in Haiti), and numerous books for young readers (including the Tía Lola Stories series, Before We Were Free, finding miracles, and Return to Sender). A recipient of a 2013 National Medal of Arts, Álvarez is currently a writer in residence at Middlebury College.
ABOUT TEATRO VISTA

Teatro Vista (Ricardo Gutiérrez, executive artistic director; José Antonio Cruz, managing director) produces, develops and commissions plays that explore the wealth and variety of the human experience from a Latino perspective for all Chicagoans to enjoy. The company provides work and professional advancement opportunities for Latino theater artists, with special emphasis on utilizing the talents of the company’s Ensemble Members. Furthermore, Teatro Vista seeks to enhance the academic performance of Chicago students through its Educational Outreach program which serves over 3,000 students annually.

The company was founded in 1990 by Edward Torres and Henry Godinez with the goal of bringing a diverse repertory of plays to Chicago as well as to address the lack of opportunities available to Latino actors. Torres and Godinez sought to cast Latino actors in roles that they have not traditionally been offered by other theaters.

With these goals as organizational principles, Teatro Vista has become one of the nation’s leading Latino Equity theater companies. It has produced over 60 productions including 16 World Premieres, 14 Chicago Premieres and commissioned numerous plays.

The company was recently named one of “Chicago’s Cultural Leaders” by the Arts & Business Council and received the League of Chicago Theatre’s Artistic Leadership Award.

Teatro Vista announces the Chicago premiere of In the Time of the Butterflies, written by Lifetime Achievement Obie Award Winner Caridad Svich, based on Julia Álvarez’s acclaimed novel, and directed by Ricardo Gutiérrez, playing in the Richard Christiansen Theater at Victory Gardens Theater, 2433 N. Lincoln, April 16 – May 22. Opening night is Friday, April 22 at 7:30 p.m. Preview performances run from Thursday, April 16 through Thursday, April 21. Regular performances are Thursdays, Fridays and Saturdays at 7:30 p.m. and Sundays at 3 p.m. Tickets are $20 for previews, $25 for Thursdays and Fridays, and $30 for Saturday and Sunday performances. Students and seniors (+65 years or older) with valid ID are able to purchase $17 tickets. Discounts are also available for groups of 10 or more. To purchase tickets, please call 773.871.3000 or visit www.teatrovista.org.