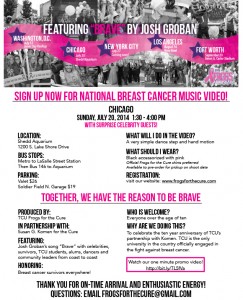 WHAT: Texas Christian University’s (TCU) Frogs for the Cure is heading to Chicago on Sunday, July 20, to shoot footage for its 2014 music video featuring Josh Groban’s hit song, “Brave,” in honor of TCU’s 10-year partnership with Susan G. Komen for the Cure® and the fight against breast cancer.

The second of five national shoots, the Chicago production will feature a giant pink ribbon that will be pulled from Washington, D.C., and then making its way to New York City, then Los Angeles, and finally back to Fort Worth, Texas, as a symbol of the community spirit in the fight against breast cancer.

PARKING: Please check with security stationed in the bus turnaround located on the south side of the building.

WHY: In 2005, TCU became the first college in the United States to officially partner with international breast cancer organization, Susan G. Komen for the Cure®, in the fight against breast cancer. In 2010, Frogs for the Cure pioneered the concept of an annual music video honoring survivors. The 2014 video is the fifth music video produced by Frogs for the Cure with the support of pro bono videography, photography and production talent to demonstrate the University’s commitment to the cause.

To celebrate the 10-year anniversary of TCU’s partnership with Komen, the Frogs for the Cure video shoot is moving nationwide, engaging the community and empowering those affected by cancer to feel hope and encouragement. The 2014 video will debut at the Sing for the Cure Gala on October 29, 2014, at Fort Worth’s Bass Performance Hall, with special guests including former First Lady Laura Bush; CBS News anchor Bob Schieffer and his Washington, D.C.-based band, Honky Tonk Confidential; as well as Tony Award-winning headline artist, Bernadette Peters; and the Fort Worth Symphony Orchestra. The video will also be featured during the halftime celebration at the annual TCU Frogs for the Cure “pink out” football game against Kansas State University onNovember 8, 2014.

To view a one-minute teaser of the 2014 music video, visit www.youtube.com/watch?v=d67rxLW_ZWs.

For more information on Frogs for the Cure, visit www.FrogsfortheCure.com.

ABOUT FROGS FOR THE CURE

Frogs for the Cure is a partnership between Texas Christian University (TCU) in Fort Worth, Texas, and international philanthropy, Susan G. Komen for the Cure®, to enhance awareness, provide education, raise funds, and support those in the fight against breast cancer. In 2005, TCU initiated the idea of a “pink out” celebration at the halftime of a home football game, and, 10 years later, the pink ribbon game tributes are now established traditions at high school, college and NFL football games across the U.S. during Breast Cancer Awareness Month.

To date, TCU’s Frogs for the Cure has raised more than $250,000 for Susan G. Komen® Greater Fort Worth affiliate. Under the longtime leadership of Ann Louden, a breast cancer survivor and member of the TCU Chancellor’s executive team, Frogs for the Cure has grown into a nationally known awareness, educational and fundraising campaign that runs year-round. For more information, visit www.FrogsfortheCure.com.