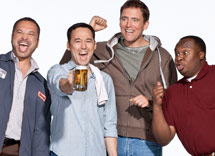 Stay after the Thursday, July 26 8pm show and watch Episode 2 of TBS' Sullivan & Son Tour with the cast!

The viewing party is included in your ticket price and we will keep our bar open late. Enjoy the show!

UP Comedy Club is a venue dedicated to producing and presenting a diverse array of comedic performers and formats, including stand up, plays, themed content, interactive, podcasts, musicals and other forms of comedy theatre that is smart, funny and provocative.

Every weekend at UP Comedy Club features a new headline stand-up comedy act. Weeknights and weekend matiness feature signature shows created for UP by Second City Theatricals. See below for information about shows and showtimes.