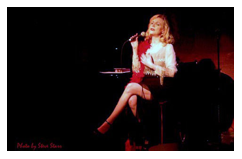 Evening With Marlene: A Tribute to Marlene Dietrich the Actress, the Music, the Desire will be performed for one night only: Thursday, March 21 at 8pm at Fiorenza Ristorante, 7404 Madison St., Forest Park, Illinois.  There is a $15 cover charge.

According to the Chicago Tribune’s Howard Reich, Petri cuts to the core of Dietrich’s classic renditions.  He praised Suzanne’s performance saying she captures “the melancholy and world-weariness that helped make Dietrich a global star.”

Petri tells the story of Dietrich’s transformation from German movie actress to Hollywood icon, from stage star wooed by the Nazis to American citizen entertaining U.S. Troops during World War II.  Although it has been over twenty years since the movie icon has passed (May, 1992), Petri brings Marlene to life with her tour de force tribute.Showcasing her versatility, Petri will take the audience on an eclectic musical journey. Performing such Dietrich classics as Boys In the Backroom, Falling In Love Again and Jonny, The Old World cabaret ambience of the evening includes accompanist Bob Moreen on piano and as musical director. Suzanne’s husband and one of Chicago’s most respected actors Robert Breuler joins her portraying Noel Coward with a special intro.

From stage to TV, from nightclubs to concert halls such as New York’s Jazz at Lincoln Center, Suzanne Petri has established herself as one of the Windy City’s premier entertainers. Suzanne has performed to SRO crowds at some of the Chicago area’s top stages including Pritzker Pavilion Millennium Park, Park West, Drury Lane Water Tower, Davenport’s, Maxim’s, Katerina’s and Toulouse on the Park. The nationally recognized cabaret diva, Suzanne has been featured at the Chicago Humanities Festival and the Mabel Mercer Foundation’s Cabaret Conventions in New York City and Chicago. Her one-woman cabaret shows have won rave reviews and critical acclaim including several  “Ten Best Shows of the Year” citations by both After Dark Chicago and Cabaret Hotline Online. Suzanne is President Emeritus and a Founding Member of the Chicago Cabaret Professionals.

A true Renaissance artist, the Jefferson Award-nominated actress recently directed “The Vagina Monologues” at the Underground Wonder Bar for the 15th anniversary of V-Day and she has appeared in acclaimed stage productions such as Oklahoma! And Zorba; motion pictures such as Milwaukee, Minnesota with Bruce Dern and Randy Quaid, Disney’s Just Visiting with Christina Applegate and indy film Lac Du Flambeau; TV roles on the CBS series Early Edition, the USA Network’s film Evil Has A Face with Sean Young and the Entertainment Channel’s A Christmas Carol.  An ensemble member of American Blues Theater, she has produced, directed and appeared on dozens of Chicago stages including The Goodman Theatre, Steppenwolf Theatre, Chicago Dramatists, Victory Gardens and Northlight Theatre.

Suzanne Petri will take you on a journey that will lift you and stir your senses, illuminating, moving and connecting with her audiences through her performances. Visit www.SuzannePetri.com for further information.